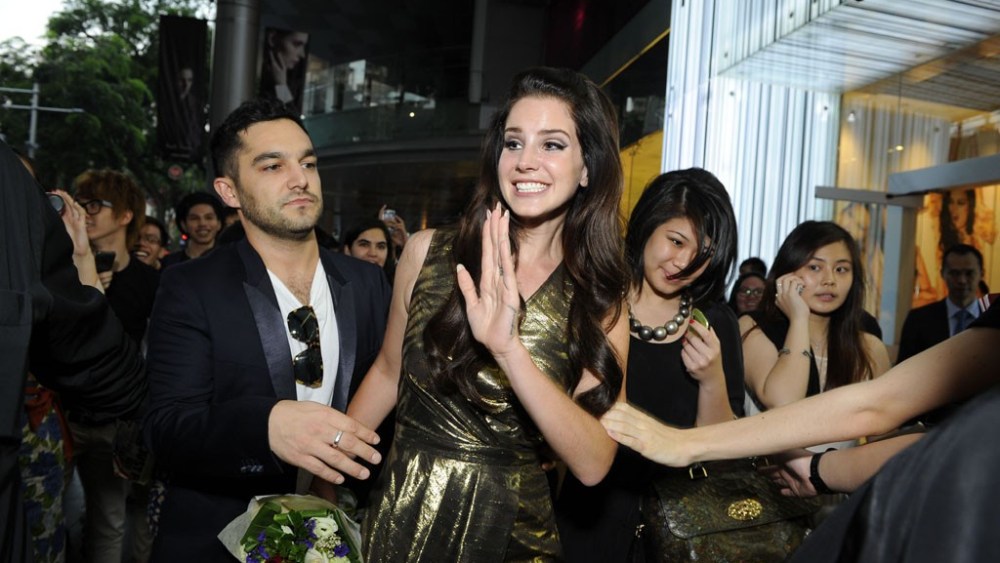 SINGAPORE — A kilt-wearing bagpipe player marched around Mulberry’s new flagship here on Wednesday evening as a crowd of camera-wielding fans surrounded the store singing: “The boys, the girls, they all love Lana.”

“Lana,” of course, was the American songstress and Mulberry ambassador Lana Del Rey. Dressed in a tiger-print wrap dress, she made a brief appearance at the 3,900-square-foot store’s ribbon-cutting ceremony. Post-costume change, into an ombré sequin dress, Del Rey later performed at a private dinner by the Singapore River.

On Tuesday, Mulberry Group plc’s shares lost almost a quarter of their value after the company issued a profit warning on slowing demand among the brand’s wholesale clients in Asia. Since then, the company’s shares have recovered slightly and trade near 10.5 pounds, or $16.60 at current exchange.

“It is always disappointing to have to issue a profit warning, but we are on the right track,” said Bruno Guillon, Mulberry’s ceo, in an interview in the limestone-tiled store. The boutique, which opened its doors Wednesday, is located next to Paul Smith and Marc by Marc Jacobs doors.

Currently 60 percent of Mulberry’s revenue is still generated in the U.K., a figure Guillon expects to dip to 20 percent in five years as the company expands elsewhere. “We see opportunity everywhere,” he said. He cited the small size of Mulberry’s Paris boutique and its limited number of stores in the U.S., where it operates six boutiques, as examples of room for growth.

Mulberry is 57 percent owned by Challice Ltd., which is controlled by Singaporean retail entrepreneur Christina Ong. Her daughter sits on the company’s board as a non-executive director. “They are a long-term shareholder, so we have the opportunity to build the brand on a long-term basis and, most importantly, do it properly,” Guillon said.

The executive said he sees the stagnating global economy as an opportunity for the brand. “I don’t know if people spend less, but they spend better,” he said. “So for us, recession is an opportunity.”

Alongside the pruning of certain wholesale accounts, Mulberry is building a second factory in Somerset, England. The plant, which will operate at full capacity by February 2014, will roughly double Mulberry’s production capacity in Britain.

Like Guillon, creative director Emma Hill hopes that provenance will prove a hit with Asian consumers.

“I would think Asians appreciate ‘Made in England’ more than anywhere else,” she said. “They have [been exposed so much to] ‘made in China’ that they want to buy into something more.”

As it enters the retail market in China later than competitors like Burberry Group plc, Mulberry has had difficulty acquiring desirable retail space in the country. “We want to be located next to the best people, so that we can compete with the best,” said Guillon. “When the economy is booming, landlords are open to talking about locations. In this market, they are more cautious, so it takes more time.”

Mulberry, which has one boutique there, will open three retail stores in China by April.

“There is a lot of work to do [about educating] the middle class in China about heritage and craftsmanship, but they are more than aware about [Brand] Britain,” he said.

Though Guillon said the company would offer customers everywhere a consistent retail experience, he acknowledged the increasingly important role of the Chinese male consumer, who tends to spend heavily on accessories. To that end, Mulberry recently hired a dedicated designer for men’s accessories.

“In women’s accessories, there are lots and lots of choices,” said Hill, who indicated that future men’s accessories would see more use of gunmetal and silver hardware, instead of just antique brass. “We want to make it the same for men. We’re really expanding the breadth.”