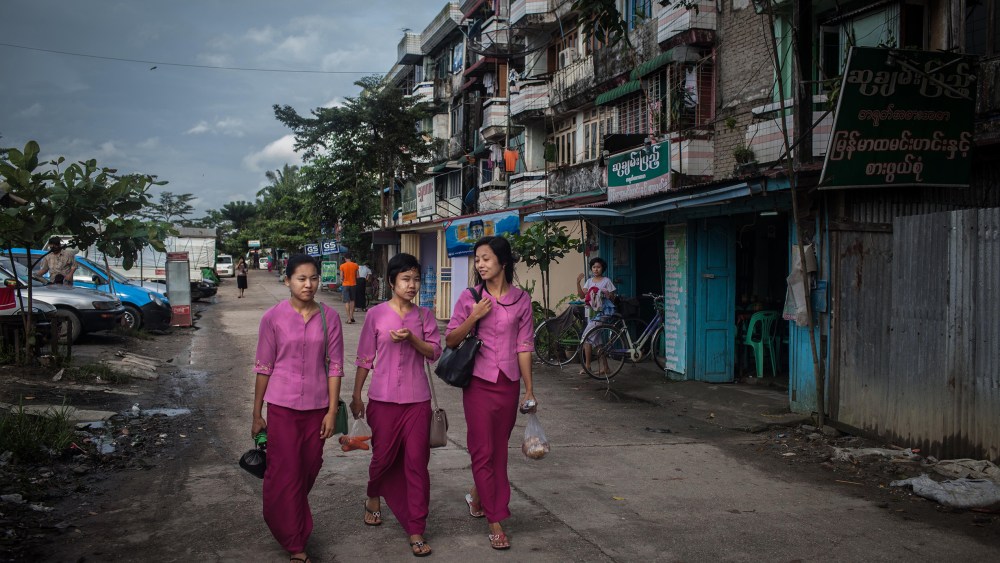 YANGON, Myanmar — Just a month after the government enacted its first minimum wage, Myanmar’s emergent apparel sector is exhibiting the growing pains of an industry seeking to formalize.

Before the daily minimum wage of 3,600 kyat — roughly $2.80 at the current exchange rate — was implemented on Sept. 1, thousands of workers rallied for a higher salary at factories around Yangon’s industrial zones. According to the Myanmar Garment Manufacturers Association, monthly wages for sewing operators ranged from $40 to $60, and the government’s decision on 3,600 kyat a day would total roughly $67 a month for a six-day week. This fell short of what unions were demanding, while manufacturers argued that it would lead to mass closures and firings.

In Myanmar, the garment sector has been growing exponentially since the lifting of European Union sanctions in 2013 and the gradual easing of U.S. embargoes. Garment exports to the EU during the first quarter more than doubled from the same period last year, reaching more than $92 million in value, while shipments to the U.S., although still modest, increased more than 112 percent to about $6.3 million.

Along with ever-increasing exports to China, South Korea and Japan, MGMA is optimistically forecasting exports to reach $2 billion by the end of the year.

Factory owners across the region argue that an increasing minimum wage will see investors and factories flee to another country in search of cheaper labor.

In neighboring Cambodia, which recently agreed to up its minimum wage from $128 a month to $140 a month, factories have been warning of a slowdown. The latest rise comes after a 28 percent jump instituted at the beginning of the year. “We have been quite clear that we are now uncompetitive,” Ken Loo, secretary-general of the Garment Manufacturers Association in Cambodia, said. “Since we’ve increased the minimum wage, we need to improve on productivity, see if buyers can pay more, and have no illegal strikes.”

According to Cambodia’s Ministry of Commerce, the number of factory closures has remained unchanged since 2014. But Loo claimed that “upward of a hundred” subcontracting factories have closed this year because of the 28 percent wage increase. Out of their members — which are all exporting factories — he is unable to give a definitive number.

Despite GMAC’s worries about losses and regional competition, the ministry’s data shows that exports have increased by about 10 percent during the first half of 2015 compared to the same period last year, bringing in more than $2.7 billion to the industry.

In Myanmar, there are no data on factory closures, but another unintended consequence from the wage decision has surfaced: Some factories have opted to reduce bonuses and allowances. These add-ons — which range from transportation costs to skill-based and attendance-based bonuses — greatly supplement a worker’s wages. But factory owners say they have to contend with high operating and electricity expenses.

At the Chinese-owned Pearl Garment Co. Ltd., a factory employing about 1,100 workers in Hlaing Tharyar, Yangon’s garment district. Daw Sandar, Pearl Garment manager, said her factory has reduced the attendance bonus, which used to be $10 a month if a worker showed up at her station every day, to $3. The factory has also cut overtime hours.

“We will not have too much overtime to save the costs,” she said. “My orders are in up until April, but maybe after April, we will reduce the workforce. We have plans to reduce orders and workers but it depends on the buyers,” she said.

She added that international buyers — who have come out in support of the new minimum wage — are unaware of a factory’s expenses, which include generator costs, a necessity in electricity-starved Myanmar. “The buyers see only the minimum wage, and they think, ‘Only 3,600 kyat, why can’t they pay it?’” she said.

For other factories, the slashing of allowances and bonuses has reintroduced the same industrial turmoil seen earlier this year.

In Mingtex (Myanmar) Industrial Co. Ltd., a Taiwanese-owned factory, which specializes in wedding dresses, located in Hlaing Tharyar, more than a thousand workers sit quietly outside the facility, huddled underneath umbrellas to shield themselves from the rain. Factory worker Ma Win Win said they have been conducting a “sit-out” since Oct. 5 because the factory had severely reduced the bonus when an elaborate wedding veil is completed from 40,000 kyat ($31 at current rate of exchange) to 4,000 kyat ($31 to $3). The factory also deducted a larger amount for housing, which it provides to workers, and overtime hours have been greatly reduced.

“Everyone was very happy when we heard about the minimum wage. We expected that we would get more money and the same allowances but that is not what happened,” she said. “Now everything is destroyed and our dreams have been crushed.”

According to a recent survey conducted by British development nonprofit Oxfam, garment workers in Myanmar earned an average of $1.50 a day, and along with allowances and overtime hours, were able to take home an average income of $98 a month. Almost three-quarters of the workers surveyed — out of a small sample size of 123 people working in Yangon’s industrial zones — reported that their income did not meet basic needs, like food, housing, transport and medical costs, and almost half are reportedly in debt because of that.

While the survey was conducted three months before the minimum wage was introduced, Daisy Gardener, Oxfam’s private sector policy adviser in Myanmar, said the results are still relevant as workers are reportedly still earning about the equivalent or less, especially if reports of slashed allowances and overtime meant that workers only received the base wage.

“This shows that if workers are only earning the base wage of 108,000 kyats [$84 for 30 days], it’s simply not enough. The minimum wage is a very important step for Myanmar, but it shows that more is needed, not just that base salary,” Gardener said.

While Western brands — including H&M, Primark, Gap and Adidas — account for only 10 percent of the country’s apparel production, Gardener said an increase is imminent after the impending November election, which is expected to be a benchmark of Myanmar’s transition to democracy. She added that buyers who pit factories against each other in terms of price are engaged in a “race to the bottom” that could result in the type of large-scale factory disasters and nationwide protests that have plagued Myanmar’s neighbors.

“We do expect international brands in particular will have learned lessons from places like Bangladesh and Cambodia. And coming to Myanmar, they have a huge opportunity to not make mistakes of the past in terms of what very low wages mean, in terms of worker unrest and brand reputation issues,” she said.

Silvia Raccagni, a spokeswoman for the sustainability department of German sports brand Adidas — which sources from three footwear factories in Myanmar — said the company has plans to increase sourcing operations in Myanmar, and its suppliers already set wages higher than the new minimum wage. Raccagni added that the company is closely monitoring factories, and that allowances and bonuses have “remained the same as before Sept. 1.”

“Moreover, our costing system is such that the prices paid to our suppliers are adjusted seasonally to reflect the legally mandated wages,” Raccagni said, adding that the potential for the country is “very positive.”

H&M — which sources from 13 factories in Myanmar — said all its factories are required to pay at least the government-mandated amount, and a refusal would mean that the relationship would be terminated. A spokeswoman for the retailer added that some suppliers have reported that bonuses have been “incorporated” into the workers’ basic wage.

Despite the workers strikes and complaints from employers, U Maung Maung Kyaw, head of office at the Ministry of Labor, said the current situation is an improvement.

“We can solve the other problems — the other problems meaning the overtime issues or bonuses or other payments. We can discuss…in the future,” he said, adding that the studies conducted by the government have shown that 3,600 kyat a day is a “fair” amount. “Some companies may face difficulties, but for most factories, we do not think it will affect them,” he said. “The beginning is always difficult but after some time, we can overcome the problems.”

The local industry looks set to benefit, too, from a declining kyat, down more than 20 percent this year.

“If this industry really cannot survive on paying 3,600 kyat [a day], then it will not be viable for the long-term, and Myanmar should not divert scarce resources to it,” Sean Turnell, a Myanmar economics expert at Sydney’s Macquarie University, said. “These industries should be 20 percent more competitive than they were a year ago.”

For Than Than Swe, a 20-year-old sewing operator at H&M supplier Myanmar York, the new minimum wage has been a relief. Before Sept. 1, she worked overtime daily to get a total monthly income of 110,000 kyat, or $86. Now, with the minimum wage, she finds it easier, and was able to take home 150,000 kyat, or $117, in the first month after the minimum was introduced.

“Now we don’t have to work overtime to get that equivalent amount,” she said. “For me, I am really thankful to the factory because I get some overtime and because I get paid more, even though [the overtime hours] are not regular.”