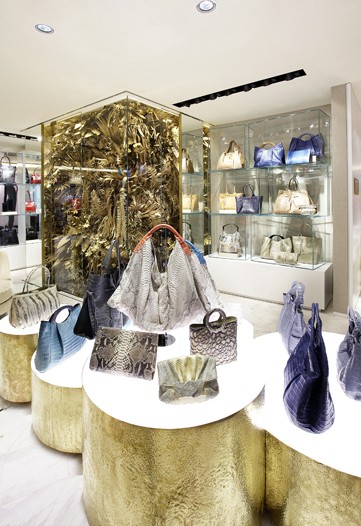 While many brands are taking this point in time to consolidate and conserve, Nancy Gonzalez is poising itself for growth.

The Cali, Colombia-based brand known for its luxurious array of exotic skin handbags has opened its first boutique in Seoul, South Korea, within Galleria department store, and plans to open other units in Korea and elsewhere. Stand-alone boutiques are in the works in Paris, Milan and Madrid, in addition to three in-store boutiques in South Korea by 2010.

Nancy Gonzalez accessories are carried in Bergdorf Goodman, Saks Fifth Avenue and Neiman Marcus, and 65 specialty retailers in the U.S., including Capitol Clothing in Charlotte and Mario’s of Seattle. The firm’s bags are also sold in Harrods in London, Joyce in Hong Kong and 200 specialty doors worldwide.

“I’m not in the retail industry, nor do I want to be in it,” said Santiago Gonzalez, president of Nancy Gonzalez, and who strives for growth without over saturation. “I am solely interested in opening retail where I don’t feel like there’s a strong presence of department stores. Bergdorf Goodman is my home in New York City, Neiman Marcus is my homes in Los Angeles and Texas. It doesn’t make sense for Nancy Gonzalez to open a retail store where we have a presence.”

The brand’s partner in the Seoul venture is Commonwealth International, which also operates Manolo Blahnik stores in the country. The Gonzalez store’s neighbors in the Galleria include luxury brands such as Chanel, Bottega Veneta, Yves Saint Laurent and Jil Sander.

Nancy Gonzalez has some distribution in Asia and is a vendor to high fashion doors such as Lane Crawford in Hong Kong and On Pedder in Singapore.

“We thought Korea would be the most interesting place to start in Asia because of the level of sophistication of the client,” said Gonzalez.

He anticipates first-year’s sales in the 500-square-foot Seoul store to hit $1.2 million, a modest expectation due to the economic malaise.

“Our participation in the Korean market was so small, and the market is so huge, that I think even under the current economic conditions there is still an opportunity,” he said.

Bags, belts and small leather goods in the John and Christopher Rawlins-designed Seoul store range in price from $700 for a clutch to $6,000 for a crocodile shopper. The space is a high design interpretation of a Colombian jungle. In true Nancy Gonzalez fashion, art by the likes of Demetrios Argyropoulos and Johannah Burke abound in the space. There is a an art installation dubbed “Paper Jungle” that has recycled paper cutouts of trees, leaves and the like harking back to the brand’s exotic pedigree, in addition to one of a kind furniture.

“[The Seoul consumer] has a highly evolved style and is willing to experiment and try new brands and styles, and mix them in unexpected ways,” said chief executive officer and designer Nancy Gonzalez. “I design collections with the world in mind. I am sure that as we get to know the Korean market more, adjustments will be made to the collections accordingly, as we usually do for other markets.”