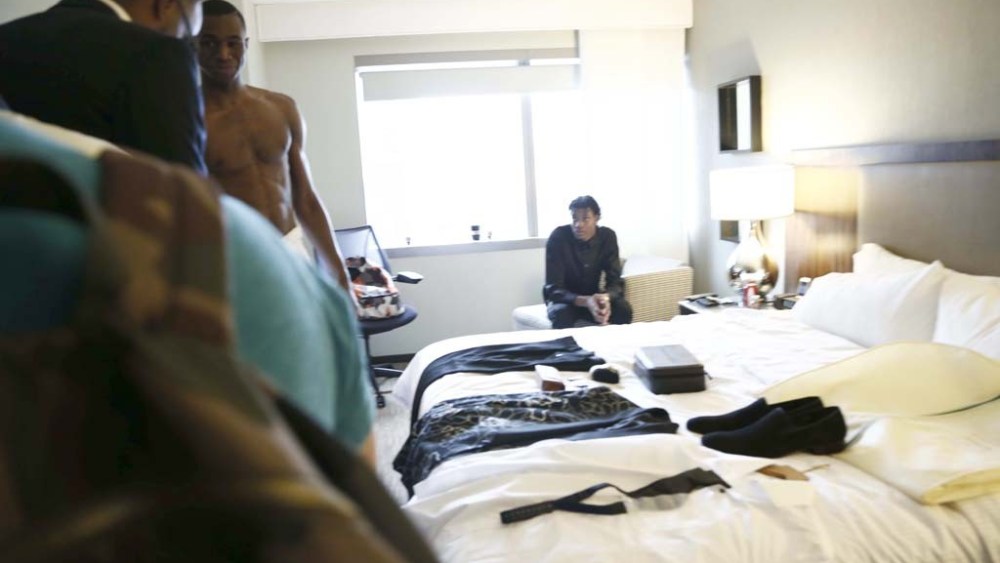 On Thursday night, Andrew Wiggins walked out of the Barclays Center in New York the NBA’s number-one draft pick. Though he was strongly favored to be picked first by the Cleveland Cavaliers, the day was emotionally fraught for the 19-year-old.

Earlier that afternoon, Wiggins was in his room at the Westin New York Times Square getting pumped to a Drake song that seemed to all but assure the turn of events later that evening: “Draft day, A. Wiggins/f–k that other side b—h we stay winnin,’” the song went.

For the big day, the Canadian-born Wiggins enlisted the help of stylist Brandon Williams and L.A.-based tailor Waraire Boswell, who has created custom suits for the likes of LeBron James, Chris Bosh and Amar’e Stoudemire. The two of them worked for weeks on Wiggins’ look.

“Number one or number two, what we do know is he’ll be the best dressed,” Boswell promised the young athlete. “Let’s take him to the level of the LeBrons and the Boshes of the world,” Williams added. “When skeptics say he’s not NBA-ready, well, he’s going to look like it.”

Wiggins stands 6-foot-8, an advantage on the court, but a challenge in the wardrobe department. But Boswell, a former William Morris talent agent, is used to it. Himself 6-foot-8, he began his career 13 years ago precisely to address the lack of sartorial options for men his size, and out of the gate landed his first client, Blake Griffin, who was the number-one draft pick in 2009. After that, Bosh, Stoudemire and James became clients. For Wiggins, he custom-created a look that includes a white rose embroidered blazer with a black satin shawl lapel.

“Today, our goal is to make everyone remember that Mr. Wiggins isn’t just a basketball player, he’s the NBA’s next fashion icon,” he said.

In his hotel room, Wiggins stood in nothing but a bath towel. First up were the pants, in black wool. Then, his suede loafers from Mezlan. Boswell then helped Wiggins button up his custom white shirt while Williams assisted with a tuxedo jacket.

“I wanted to set him apart from the past and other drafts,” Boswell said. “Generally, on draft day, all of these guys will have these suits from a handful of suit clothiers or have their local tailors do that for them — we wanted him to look like he’s already been there, done that.”

“It’s all about the fine details,” he said.

After carefully placing both diamond studs in his ears, Wiggins caught a glimpse of himself in the mirror for the first time. Wiggins seems to keep as much of a poker face in real life as he does when he’s playing, but then, he cracked, if just for a second, and smiled.

Wiggins replied with a big grin. “I was told to always dress like you’re going somewhere better,” he said.

At 7:30 p.m., Wiggins was in his seat at Barclays. Mobs of fans shouted his name from the bleachers. The cameras were zoomed in on him. The pressure seemed to be mounting, but he looked stoic: posture straight, eyes focused, diamonds glistening.

When his name was finally called, he was caught off guard, then finally, elated.

He hugged his mother, Marita Wiggins, the former Olympic sprinter, and took the stage wearing the Cavaliers’ wine-colored hat.

“It feels great and a dream come true,” he told WWD after he had walked off-stage. “It is a moment me and my family have been waiting for, so I am very excited. My emotions were what I expected, but I had no real expectation of how the day would go. I tried not to put too many outcomes in my mind, just take it all in as it happened.” His mother, who had stood beside him the entire time, was beaming.

“I can’t wait to get my first check to treat out my dad, mom, siblings and friends,” the new Cavalier said.