Net-a-porter last July dipped its toe into the sandbox with a designer children’s wear pop-up shop from Gucci, followed in December by Moncler Enfant and a collective of casual brands in January. The upscale e-commerce platform today introduces a pop-up shop for Chloé Kidwear, as it considers a larger category play.

Chloé Kidswear is a collection of 49 ready-to-wear items, including swimwear, shoes, bags and hats for babies and girls up to age 12 and is likely to appeal to young, affluent mothers who are increasingly dressing their children as mirror images of themselves.

“As a global online sales site, we wanted to give our own point of view to the children’s market by trying to create a different product selection for the consumer,” said Elizabeth von der Goltz, global buying director of Net-a-porter. “Our desire, above all, is to provide exclusive pieces by offering some of the best-selling styles for women in children’s sizes. The idea is to create mini-me pieces.

“We’re testing the market, as we realize the strong potential for growth in this category,” von der Goltz said. “There’s a convenience we can provide to mothers who now can shop for themselves and their children on the same site at the same time. The children’s wear offering is an added category for our customer as part of the shopping experience.

“The markets that have best responded to this new offer for children are Europe, the United States, Asia and the Middle East,” she added.

Children’s wear has been challenged in recent years. Gymboree in January filed for Chapter 11 bankruptcy protection and this month agreed to sell its namesake brand to The Children’s Place and its Janie and Jack chain to Gap Inc. In addition, there’s been a lack of brands at the mid-range, with value-priced labels such as Gap Kids and Old Navy at one end of the spectrum, and Ralph Lauren Kids and Bonpoint at the other. Nordstrom, which acquired a minority interest in Peek…Aren’t You Curious, has worked to develop the category although at many department stores it’s an afterthought.

Chloé Kidswear, with prices starting at $90, references elements of the main collection, including the brand’s horse motif, graphic prints and scalloped edges. The spring 2019 line takes a cue from the runway with relaxed volumes, patchwork washed jeans, asymmetrical T-shirts and whimsical swimsuits. There are also Victorian details and embellishments Chloé is known for, such as delicate embroideries, smocked waistbands and cotton guipure plastrons.

Net-a-porter will offer this summer a variety of brands, not only luxury collections. The e-commerce site identified a need for less fussy looks, and in January introduced Kids Casuals, its first multibrand kids’ wear collective. Exclusive capsule collections from six girls and boys brands for ages one through 12 highlighted contemporary relaxed looks. 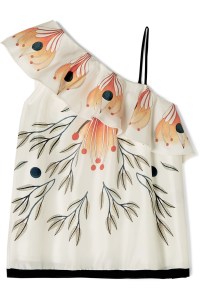 A top from the Chloé Kidswear pop-up at Net-a-porter.Also in the Collective, Lingua Franca Kids offered playful designs with embroidered messages that read “Tree Hugger” and “Cool Like That.” Golden Goose Deluxe rounded out the Collective with a line of pint-size version of its most-popular sneaker styles, and sustainable footwear brand Veja interpreted its signature sneakers in a rainbow of vibrant colors decorated with illustrations and emblazoned with its V logo.

“There is certainly a lot of market research that is necessary for any category launch on Net-a-porter,” von der Goltz said. “The kids’ wear pop-ups feed into that and are a way to explore and [understand] the potential for growth in this new category. We’ve been analyzing our sell-throughs and speaking to brands to fully understand the need for kids’ wear for our global customer.”

The e-tailer has built a robust children’s wear capsule program and plans to broaden the offering this summer with other brands.