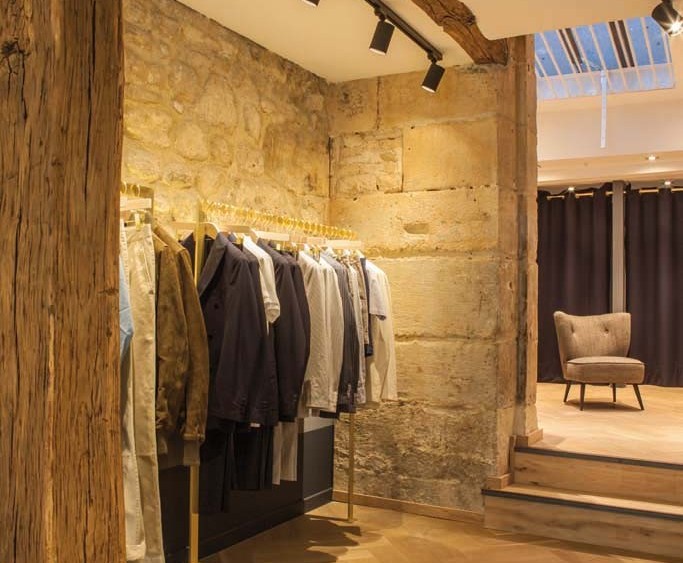 PARIS — Against the backdrop of a luxury sector that is slowing down in most parts of the world, a new movement of male, urban and very contemporary French brands is stepping up to fill the middle segment of the market.

Offering easy, high-quality design at an accessible price, these brands have found a niche between luxury and high street, “a niche that didn’t exist in France before,” said Paris-based fashion consultant Jean-Jacques Picart. “In France men could only shop either ‘business style’ or ‘easy to wear.’ There was nothing in between until new names such as Ami, Marchand Drapier, Kitsune, Carven and others appeared.”

Picart said that unlike French women, French men used to dress “quite safe and conservatively” or simply “sporty,” but their sensitivity to fashion has grown following the rise of fashion blogs as well as e-commerce. This “new potential” has not gone unnoticed by a new generation of designers, who launched their labels, set “between too conservative and too trendy,” the consultant said.

But what started as an adventure a few years ago is turning into serious business. Brands such as Melinda Gloss, Officine Generale and Monsieur Lacenaire are quickly moving into brick-and-mortar and/or e-commerce, expanding their global footprint at double-digit speed.

“Their forte is the right balance of design, product and price,” said Picart. Combining the magic formula with what Picart describes as “the French touch,” which has proven particularly successful in Japan and the U.S., they are the new kids on the block.

Design/Philosophy: “The biggest opportunity in men’s wear today is the loyalty of the customer,” said the brand’s founder and creative head Pierre Mahéo. “We built the brand with the plan to make it last — in terms of quality, but also fashion,” he said. Officine Generale’s strength lies in a simple yet clever wardrobe incorporating workwear and military references made contemporary through modern tailoring and a religious attention to fabrics.

“I don’t negotiate on the quality, but it has to stay affordable,” said Mahéo, whose production is located in Portugal. He claims the Portuguese can do it “just as well as the Italians, but you can save at least 30 percent on the jackets alone. I just don’t think that at this point in time a guy wants to put all of his money into clothing, so he finds refuge in product with value added.”

News Factor: Last week, Officine Generale opened its first stand-alone boutique at 6 Rue du Dragon in Paris’ Saint-Germain neighborhood. Designed by Mahéo, the 230-square-foot venue with an apartmentlike atmosphere, where men can relax on a couch and pick their wardrobe from bookshelves, also stocks a new collection of basics, the brand’s 15 greatest hits, including the chambray shirt and fisherman chino.

Now in its fourth season, the brand is sold at 85 points of sale, including Barneys New York and Shibuya in Tokyo. Mr Porter will offer an exclusive 12-piece collection in October, and the brand is adding 30 percent to its list of stockists every season, while sales are doubling at the same rate.

Strategy: Currently in talks with investors, Mahéo, whose business is 90 percent abroad, notably in the U.S., the U.K. and South Korea, said he has an “aggressive business plan” for the U.S., including direct retail development via freestanding stores. Its next Paris boutique is expected to open by June 2015.

Design/Philosophy: “Growth was never our primary concern. A good fashion house is like a good wine — it takes time to grow. After seven years of learning, I feel we have entered the age of reason, so to speak,” said Benoit Carpentier, founder and designer of Marchand Drapier. Still an insider tip, the label moved his business from Toulouse, where his only boutique is based, to Paris three years ago. It offers formal cuts with quirky twists — a grosgrain inserted into a shirt to mimic a tie or a soft jacquard with erotic scenes from the 19th century as lining are among its signatures. Carpentier, a fifth-generation formal fabrics dealer, is very keen on quality; he favors the long fiber of Giza cotton for shirts, for instance, which ages best, he says, lamenting “this ongoing bulimia of clothing” that goes against his culture.

Strategy: Stocked at 30 points of sale including L’Eclaireur and Printemps in Paris, Marchand Drapier is concentrating its efforts on e-commerce and wholesale expansion in the U.S. with an aesthetic that Carpentier calls “the new sartorial.

“The buyers used to tell me, we like what you do, but we don’t know where to put you. Now they are fed up with the formal, Italian look, which offers 13, 14 blue suits that all look the same. The U.S. especially used to be a very conventional market. But they have evolved. I think men are increasingly leaning towards something more playful, but the average guy I know is often not willing to accept a crazy design, which is very expensive and often too complicated to wear.”

Price: One-and-a-half years ago, Carpentier altered his business strategy, moving production from France to Portugal. As a result, a shirt that cost 300 euros, or $407, now sells for 150 euros, or $203.

News Factor: The label will showcase its Sicily-inspired spring collection, featuring citrus and maritime prints designed by Carpentier himself, at Project New York for the first time next month, as well as during Paris Fashion Week.

Design/Philosophy: Having trained with the Hermès knitwear department, Garance Broca, founder and designer of Monsieur Lacenaire, an up-and-coming Paris-based brand that reinterprets knitwear with a modern take, said she has a knack for high-end raw materials. Her cotton pieces are made with Peruvian and Egyptian fiber; she uses British twill for trousers, while the wool is from Shetland. “Fiber is like food. Depending on where you bought it, it will either make a good meal or it won’t,” she said. Fun and easy to wear, the pieces feature trompe l’oeil pockets and quirky touches of color including turquoise, pinkish red or yellow, while traditional stitches such as Aran and cable are used to experiment with novel patterns on everything from cardigans to trompe l’oeil varsity jackets.

News Factor: The label opened its first store at 57 Rue Charlot last week, a playfully designed venue featuring a foosball table and kitchenette, while the brand’s first presentation with models (they are expected to walk down Rue Charlot, turning it into a block party), is slated for Saturday. A women’s line is already in the works. The brand, whose strongest market is Japan, is also to launch a capsule collection of 15 pieces at Tokyo’s Iena in October.

Strategy: Broca said from her previous experience (her résumé includes stints at Chloé and Balmain) she saw “that knitwear served as mere accessories of the collection,” while she wants it to be “at the heart of my work with everything else built around it.”

News Factor: Alexandre Mattiussi of Ami said it’s just a matter of time now before he will plunge into women’s wear following the success of his men’s wear collection. Last month, the brand set up its second Paris shop at 22 Rue de Grenelle on Paris’ Left Bank. The 164-square-foot space is conceived like a bar — kept sleek in wood and marble — serving clothes instead of drinks. Mattiussi said he wants to dress the guy “next door, someone from the neighborhood who pops by” to get one of his cool-chic essentials.

A store in London is due to follow early/mid next year.

Strategy: The 2013 Andam Fashion Award winner is using his prize money wisely; Mattiussi launched an e-boutique in December, “finally hired an assistant” and staged his first runway show in January. “Andam served as a great accelerator for us, it gave us visibility and boosted our credibility,” he said.

The label, now in its eighth season, counts 220 points of sale; for the past three years the brand has been doubling its sales every season, with Japan, France, England and the U.S. leading the pack — all places where his straightforward, masculine looks enjoy a high level of popularity. “I think it’s because they appeal to a guy from the city. And the price is nice.”

Price: Mattiussi, who is often seen personally scouting fabrics at textile fairs, invests in noble cashmere and high-end cotton, but saves on fabrication, outsourcing it to places like Portugal or Romania. “You can’t mock people with overpriced product, they are not stupid,” he said. “Especially today when everyone is connected — it’s all happening on Instagram and Facebook — it’s important to stay authentic. Customers either accept you right away or they don’t.”