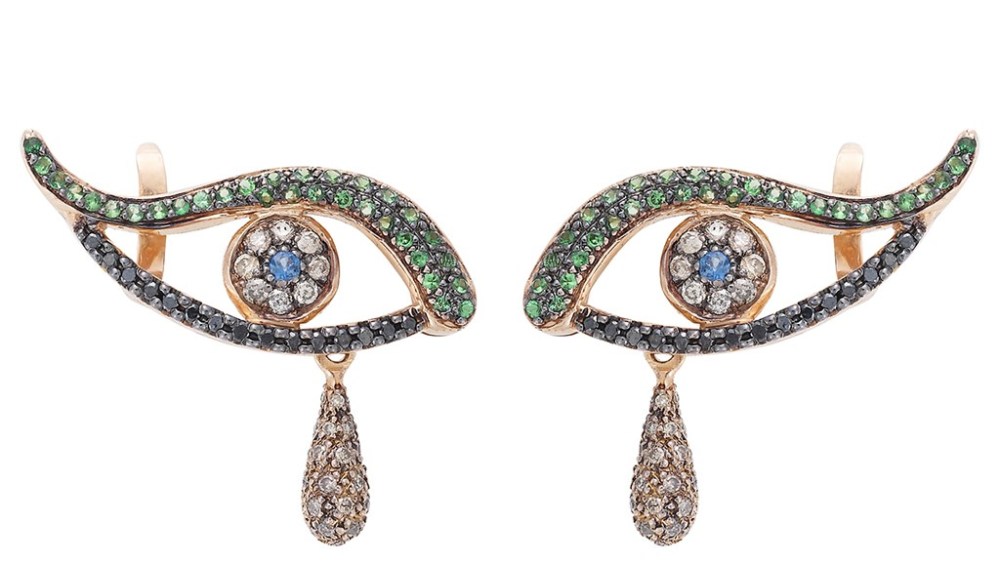 LAS VEGAS — A slew of new colors and shapes sparkled at the Couture and JCK jewelry shows here as retailers were in a more confident mood from the recovering economy.

At Fred Leighton and Kwiat, chief executive officer Greg Kwiat characterized the business as upbeat. “Buyers have been [somewhat positive] for the last few years, but people are now really responding to the reality that business is moving forward. Each year, we look back and think, ‘We did all right’ but yet it’s as if we can’t believe it,” said Kwiat.

He noted a return to classics in the bridal and engagement business, a consistent driver for Kwiat, but a push toward new designs in its fashion segment. Climber earrings and “floating” diamonds in rhodium-plated gold were among the new looks.

Ear cuffs, jackets and climbers, plus floating styles of earrings (those with studs in the front and larger or dangling pieces attached to posts in the back) and mismatched or asymmetrical pairs were strong. So were double or triple rings and styles that climbed over or between multiple fingers, palm bracelets and hand chains. There were also more headpieces and body jewelry on display as well as convertible styles.

On the color front, blues and greens dominated (aquamarine, London blue topaz, tsavorite, tanzanite, lapis, chrysprase and turquoise were most popular), followed by mini-trends such as clear or translucent stones like white sapphire, topaz or quartz, moonstone and rock crystal, and rainbow-style combinations. Metals were mixed freely and the black-and-white contrast look was among leading trends. Designers were also using technology to craft innovative textures, such as Yossi Harari’s 18-karat yellow gold Lace collection, which used CAD techniques to create a woven basketlike texture, which was also less weighty and expensive than 22-karat gold.

The bevy of choices excited buyers on the lookout for new, who were also bolstered by increasing confidence in a recovering economy.

“Designs had stagnated over the last few years and this year I’m seeing a burst of new creativity and we bought deep into several new collections, including Fernando Jorge and Melanie Georgacopoulos,” said Andrea Riso, owner of Talisman Collection in El Dorado, Calif., which carries more than 40 collections. “I also buy a lot of Stephen Webster, Paula Crevoshay and Atelier Minyon.”

Riso said she has placed large orders at the Couture show since opening her store in 2012, and has only considered the consignment model in the last six months. “I invest a lot in each designer with advertising and overhead, and I was buying a lot of showstopper pieces when gold was $1,800 an ounce. But financing designers can make you cash poor. I bring in a line for 90 days, and if it sells, then I buy into it significantly.” Riso said she spends anywhere from $50,000 to the low six figures on each designer she carries.

Andrea Hansen, founder of the fine jewelry showroom and brand consultancy Luxe Intelligence, stirred the pot at both the JCK and Couture shows when she posted an open letter to the industry calling for brands, manufacturers and retailers to take a more proactive approach to help nurture independent designers, rather than impose huge open-to-buys and space requirements on retailers, which can put the squeeze on their budgets and floor space for new lines. “If a store feels they have to buy the same five big brands then every store starts to look the same, not to mention they’re forced to discount to compete, which doesn’t help anyone. We as an industry should be more supportive of new talent and help their businesses grow,” Hansen said.

Net-a-porter is another retailer that supports independent brands, and buying manager Sasha Sarokin called the Couture show “a healthy and holistic view of what the industry has to offer of brands large and small. I saw some new brands I wouldn’t have otherwise and met with existing vendors.”

Fine jewelry is a growing category at Net-a-porter, whose customers can spend more than 1,000 pounds, or $1,600 at current exchange, on a delicate diamond necklace or a dress. “Jewelry growth has outstripped fashion because the customer understands it’s an investment. We are seeing women invest in pieces more timeless and more casual that they can wear every day,” she said, adding that there are still markets around the world where women want statement pieces as well. “We recently sold a 20,000 pound [$32,000] Anita Ko necklace but there are also a lot of women who buy her 300 pound [$480] studs.” Among Net-a-porter’s popular designers are Ippolita, Kimberly McDonald and Ileana Makri, and other labels Sarokin has her eye on are Andrea Fohrman, Yossi Harari and Jemma Wynne.

Other designers known for their use of color include Irene Neuwirth, who moved away from boulder opals into alternative stones such as black opals, tourmaline, aquamarine, tsavorite, Kingman turquoise and rubies. “After 10 years in the business, I’m at the point where I can really nurture my stores’ business,” said Neuwirth, who last week won the Swarovski Award for accessories. “They are ready to step it up and more willing to buy a one-off piece. At the same time, I’m starting to focus on pricing strategy. This is the first time the collection is really well-rounded and we have something for everyone, from $3,500 to $250,000.”

Neuwirth called her customer’s buying habits “a mental adjustment, for a woman to want a $100,000 necklace that didn’t really look like a $100,000 necklace. Now clients have faith in the brand and stores take the risk.” The diamond collection she launched at Barneys New York last year has been picked up by other stores and is “selling out the door.”

Nam Cho, who traditionally works in diamonds, was also conscious of being able to sell to customers with smaller budgets. She offered several of her all-diamond baguette pieces in white sapphire for one-quarter of the price, for example a sapphire band was $3,000 wholesale.

Other trends included open-work or negative space pieces made from thin pavé bands in either swirling or geometric shapes, as seen at Alberto Parada, Joelle Jewellery, Sara Weinstock and Gabriel & Co.

There were also several one-of-a-kind showstoppers on display, such as a $160,000 sacred heart locket from Arman Sarkisyan made from sapphires, rose-cut diamonds, rubelite and cyanite. Such a piece takes three to four months to engrave and a year to complete. At Coomi, the one-off floating diamond and emerald or ruby necklaces take almost a year to make as well.

“Buyers seemed much more responsive this year. We feel in part that is because of the success our retail partners have had with the collection in the past year. At first we were uncertain on how customers would respond to having a $400,000 Colombian emerald set inside an opal surrounded by rose-cut diamonds, but the reaction and sales results have been great,” said Coomi Bhasin, adding, “We still find most of our business coming from our gold and antiquities collections. Our retail partners have been supportive and we have doubled the number of doors since this time last year. We plan on doubling our business again this year.”

In other news, Le Vian, Hearts on Fire and Alexis Bittar showed off new store concepts in their booths; Boulder, Colo.-based jeweler Todd Reed will open a Los Angeles store in September on Abbot Kinney Boulevard in Venice Beach, and Forevermark unveiled its new “The Promise” ad directed by Benjamin Millepied, which focuses on core bridal pieces.