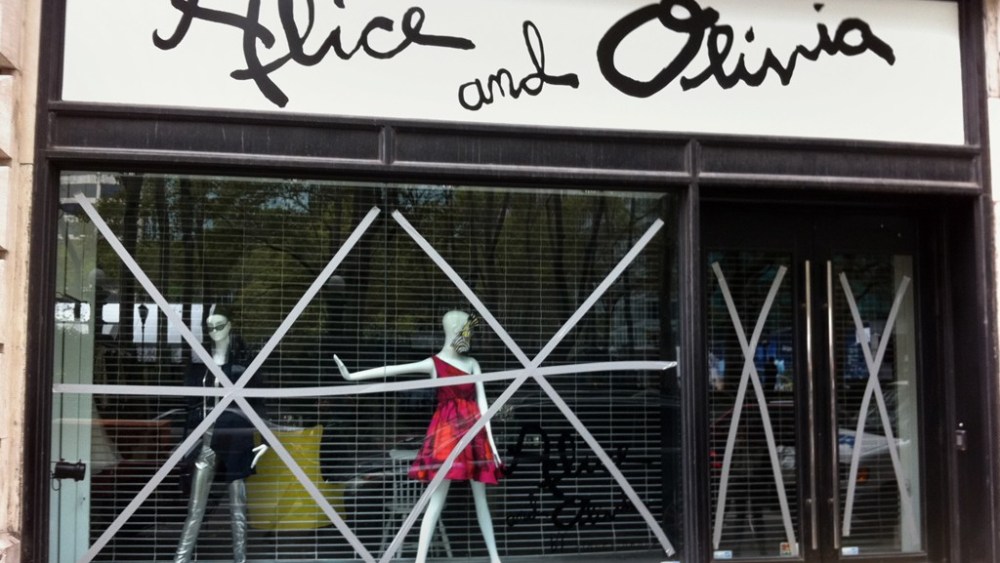 NEW YORK — With traffic snarled and subway service out for an indeterminate amount of time, New Yorkers tried to return to work Wednesday after Hurricane Sandy brought the city to a halt for two days.

Instead of having the usual morning crush of commuters darting to their offices, Times Square was awash Wednesday with people looking for things to do. By 10 a.m., the line for the TKTS booth was already teeming with people perhaps more interested in a few hours of heat and elecricity than the actual Broadway shows they were buying discount tickets to. Forever 21 was busy with shoppers, while the Disney store next door was still boarded up (though a good-humored graffiti artist had written the name and number of a New Jersey glass company.) Some stores like Billabong, Quiksilver and Sephora literally had their doors wide open so that passersby knew they were open. Aeropostale still had its store windows boarded up but a handwritten note read, “We will open at noon.”

Closer to Bryant Park, the Alice & Olivia store still had sandbags outside its door and duct tape crisscrossed on the windows, and BCBG’s Fifth Avenue store remained dark Monday at noon. A few blocks north, Zara and H&M were bustling with shoppers but getting there from the West Side proved tricky with numerous Sixth Avene traffic lights out due to the power shortages. On Madison Avenue, Chanel remained closed but Paul Stuart, Brooks Bros. and J. Crew appeared open for business. Like many other Madison Avenue stores, they were having trouble with incoming calls. Madison Avenue BID president Matthew Bauer was uncertain how many of the group’s roughly 450 retailers were having phone problems, but he said Verizon was aware of the problem. In a mass email to members, the Fashion Center BID said most of the area’s ground-floor retail was open including larger retailers but smaller stores on side streets were closed.

At the Shops at the Time Warner Center, it was business as usual, save for Whole Foods, where what amounted to a grocery store bouncer had cordoned off a line and was enforcing a one-in-one-out door policy. While some shoppers wandered into AX/Armani Exchange and C.Wonder upstairs, most seemed in search of the same thing — electrical outlets. Throughout the four-floor shopping center, people clustered around the numerous electrical outlets to charge their phones and computers. Across the street, others hovered outside a closed Starbucks to piggyback its WiFi.

Columbus Circle traffic was dead-stopped from the Upper West Side to Fifth Avenue. Nearby street closings due to the partially-collapsed construction crane dangling 1,000-feet above the luxury high-rise One57 only tied up the streets more. Some athletic types — dressed in street clothes, not running gear — opted to run on the sidewalks, perhaps warming up their legs for Sunday’s New York City Marathon.

Foot and street traffic was considerably lighter on Seventh Avenue. Handyman Robert Allen said only 15 percent of the 150-plus companies at 1407 Broadway had made it into work. He had been working there as well as at 499 and 462 Seventh Avenue since Sunday. A security guard at 1411 Broadway estimated that about 10 percent of the building’s 1,500-plus employees were at work Wednesday. At 525 Seventh Avenue, only seven or eight of the 42 companies housed there were working Wednesday, said Israel Perez, who was manning the security desk even though he usually handles freight for the building.

Walking into the lobby, Mike Santini, who works in sales and marketing for NYC Knitwear, said his first commute from staying with relatives on the Upper East Side had not gone well. Taking the bus had cost him two hours and 15 minutes but he was ready to go just the same. “It’s business as usual. You deal with what you have to. Luckily, we all have e-mail so we can each work with clients wherever we are.”

At 550 Seventh Avenue, Barbara Kuo, a patternmaker for Donna Karan International, sighed deeply as she walked into the building after a two-and-a-half hour trek from downtown. “I live on Wall Street. I waited for a cab for 45 minutes. But there were so many other people who were faster than me,” she said. “I tried to call a car service but I couldn’t get through. Then a policewoman told me the M5 bus was running.”

Bora Ryu, a handbag designer for Artisan House, said Wednesday was her first day back this week even though employees had been encouraged to work Monday and Tuesday if they could get to 550 Seventh Avenue. Having walked 40 blocks from her East Village apartment, she did not exepect to see many of her coworkers. “More than half live in New Jersey, Brooklyn and Queens. They are supposed to get here if they can but I doubt they are going to spend money for a cab,” she said.

Those who did make it in were greeted by Scott Bartoloney, the building’s handyman who was giving the two security guards who had been working since Sunday a few hours to sleep in the basement. A Howell, N.J. resident, Bartoloney said, “There’s no electricty in Howell, Brick, Freehold but somehow they were able to get the tolls power and the new inspection station on the parkway has power. The rest of the state doesn’t have electricity but anything run by the government has power. I just love New Jersey.”

At 530 Seventh Avenue, most of the 200 companies had some staff on the premises. Security guard Joe Casabianca said he peddled in from Queens Wednesday morning after taking a 12-hour break from a three-day shift to go home to shower and shave. A UPS worker, who declined to be identified, said he like his colleagues have all sorts of back orders to deliver. “Some of our preloaders have been working since 10 o’clock last night,” he said shortly before noon on Wednesday.

Out on the streets, the post-Sandy strains were evident in snippets of conversations. “I knew the power would go out but I didn’t think it would go out out,” one woman said. Others were trying to make the best of a trying situation. As two men walked down Seventh Avenue, one asked, “Are you going into the office?” and the other offered, “I may go back to bed.”