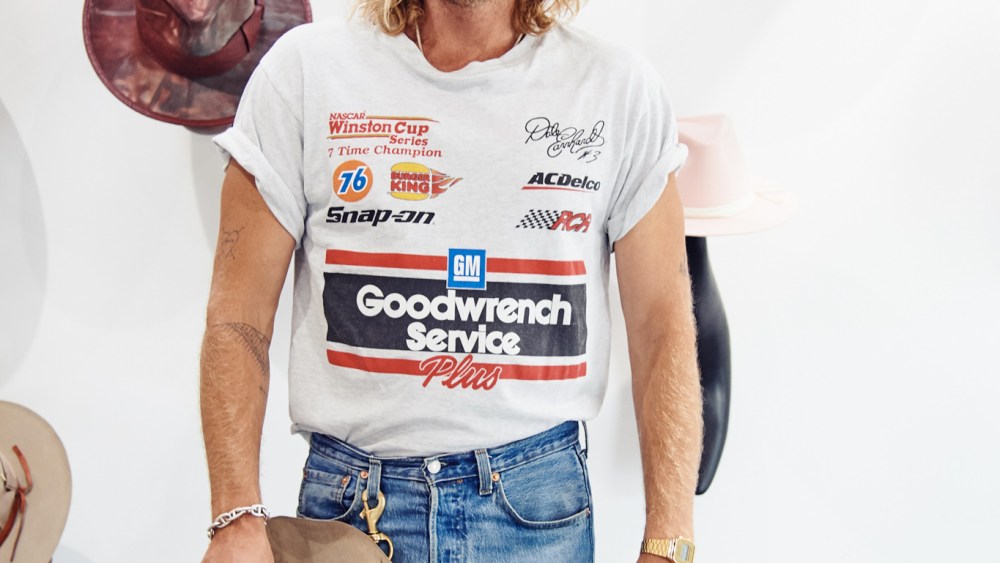 The designer, whose handcrafted creations with details like bullet holes, burns, beads and dried blooms have been worn by Lady Gaga, Madonna, Tom Brady, Pharrell Williams and many more, has opened a 1,800-square-foot retail space and attached a 2,000-square-foot production studio in the boho Venice neighborhood. He hasn’t set up shop on the traffic-choked stretch where Everlane and Birkenstock have recently opened, however (“I avoid that like the plague,” he said of “upper Abbot Kinney”). Instead, he is pioneering a corner south of Venice Boulevard, next door to Stahl and Band furniture, whose minimalist pieces he’s picked up for hanging-out options in the shop.

“We have a woodworker, a welder and a sail maker nearby. This area is a little more industrial…to me, this is going to be the next cool part of Abbot Kinney,” he said.

The store is as L.A. cool as it gets — warm, airy and fragrant, with the scent of sage from Fouquet’s own “Ocean Nomad” candle in the air and Rolling Stones tunes playing in the background (the designer made hats for Keith Richards for the “No Filter” tour).

In six years, Fouquet has created a burgeoning lifestyle brand out of the single category of handcrafted hats. “I started wanting to make luxury hats based on the heritage of cowboys investing in $1,000 fur felt hats, but as a more modern fashion statement. I didn’t realize what was going to happen,” said the sometime model (the son of model Bernard Fouquet, Nick has appeared in ads for Ralph Lauren, Levi’s and more). “It feels super official, I grew up and the brand grew up at the same time,” he said of the new digs.

The space is the physical embodiment of his expanding vision, which will one day include ready-to-wear. Still self-funded, he’s hired a chief operating officer, bringing his team to 19, is projected to do $3 million in sales this year, and is exploring outside funding. “We’ve seen interest,” said the surfer-blond with East Coast boarding school roots (the L.L. Bean bluchers he’s wearing are a dead giveaway).

“Venice is part of the appeal, the heart and soul of the aesthetic foundationally. But being born in New York, growing up on the East Coast and in the South of France, I think my designs incorporate all three,” said Fouquet, who lives in a geodesic dome home in Topanga Canyon. “I think of it as acid prep,” he said of his aesthetic.

Hat stands extend from the wall displaying his designs, including the Isla del Tortuga tan-colored beaver felt hat with blue tie-dye band, and the Coco Conspiracy style in mustard-hued straw with a paper cocktail umbrella tucked into the side. The inky, old-timey illustrations in the silk linings are by Cuba Tornado Scott, Ridley Scott’s granddaughter, who is one of the designer’s muses. And each hat style has the brand’s signature matchstick embellishment. “The matchstick is my alligator,” said Fouquet, a former smoker who started putting strike-anywhere matches in the brim of his own hat, then made it his thing.

“It’s become a symbol for me of the spark of inspiration and for the brand.”

There’s a counter and barber chair where customers can sit and peruse hundreds of colors of felt and straw to design their own hat, or they can relax on the outside deck with a Topo Chico mineral water.

Prices can run to $7,000 for custom hats, which puts Fouquet in league with famous European creators such as Philip Treacy, Maison Michel and Stephen Jones, only with a distinct Americana bent.

“I have to remind myself, for these cowboys in Montana, Texas and Wyoming, spending $1,200 on a Western weight fur felt hat is normal. But when I introduced it to Barneys, they said we’ve only sold $300 or $400 hats from Borsalino, who I’ve since worked with. But I’ve been able to educate people that there is a category at that price point.”

Fouquet got his start in 2008, apprenticing for fellow Frenchman Christophe Loiron, the famed L.A. vintage Americana curator and designer of retro-inspired workwear line Mister Freedom. He launched his own brand in 2011 in an underground parking garage in Venice, after purchasing traditional hat-making machinery from retiring milliners in the Midwest, and quickly gained attention for his crazy custom techniques, including setting fire to the crowns of his hats.

Over the past two seasons he’s been adding new product categories to grow the brand. “I developed and built out the accessories as a complement to our main accessory, the hat,” he said of the color-soaked T-shirts with matchstick logos ($125); palm tree-print silk scarves ($130); leather goods (a crossbody, $920, and tote, $1,250) with hand-embroidered detail, and fine jewelry (a sterling silver and sapphire matchstick pin, $2,400) available in the store.

“I have to keep going because otherwise I become the mad hatter,” he said.

A key to building his business, which is split 50/50 men’s and women’s, has been having the store and production in one place from the start. “To me, it’s always been such a broken system. When I started, I was ignorant, I just opened a store and started building out my universe and clientele, wholesale came later,” Fouquet said.

Before Abbot Kinney, Fouquet had an even more out-of-the-way location, on Lincoln Boulevard in Venice. “In L.A., everything is a destination…You plan your day for it — you will come see Nick, then go get food at Erewhon.”

He shows and sells his collection four times a year in Paris, but said his own retail still accounts for about 70 percent of sales, with wholesale comprising the rest.

Fouquet likes that he can pop back to steam or shape a hat, like he did on a recent afternoon for a customer who wanted a tweak to hers. He said, “At heart, I’m a craftsman.”

Which is why he was so eager to bring on a chief operating officer, Mike Maloney, formerly an executive at Chrome Hearts, to handle the financial side. “He understands vertical businesses,” said Fouquet, who prefers to wear only one hat — in business and in life. He only has one hat he made for himself, with signatures on the brim from all his team members.

“He’s really had an unprecedented few years for a single category designer,” said Maloney, noting that Fouquet has been growing the top line 20 to 30 percent year-over-year. He sees growth potential in direct retail, and said they will be looking to open more stores. (They’ve been testing key markets with trunk shows, including one with LoveShackFancy earlier this month in Montauk, N.Y.)

“He’s continuing to expand e-commerce and we’re looking for opportunities in key regions. The way he’s bootstrapped to expand into new categories, using third parties, has been useful to the brand, and we’re starting to explore external investment,” said Maloney.

But Fouquet isn’t in a hurry. “I think of it like a tree, the trunk is the hats, the branches are the accessories and the leaves are the ready-to-wear,” he said, sounding very Topanga. “Ready-to-wear is a big undertaking that requires a lot of funding. I want someone to come in who can bring added value.”