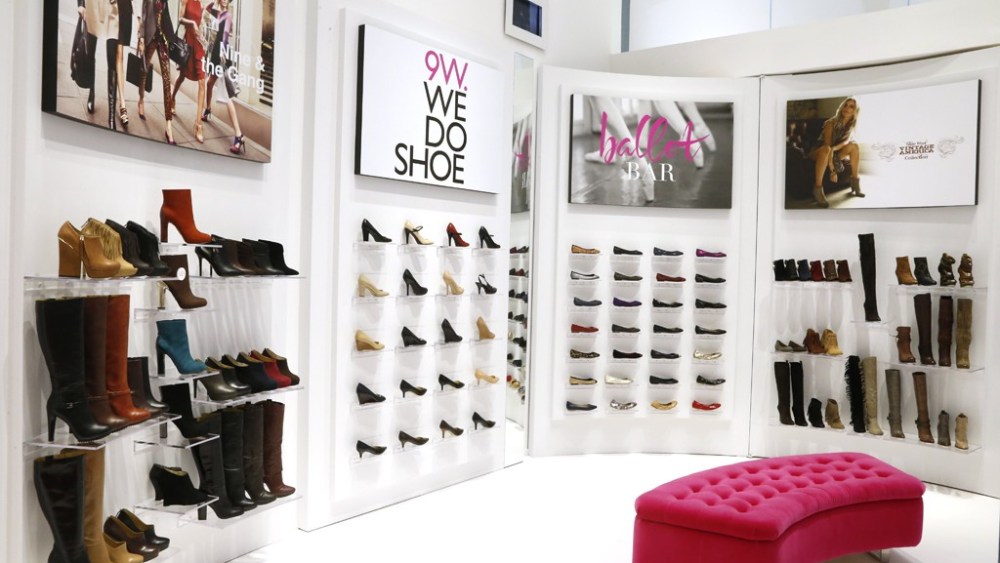 The $1 billion brand is out to up its “cool” factor with a string of new store formats that it will roll out worldwide. The first efforts can be seen here, including the 4,286-square-foot flagship at 750 Lexington Avenue that reopened Sunday.

The flagship is The Jones Group Inc.-owned company’s first to employ a new retail concept: merchandised walls with a laser focus on trend, the main attraction being The World According to Pumps — a wall of sky high, mid-height, kitten and block heels in leather, patent, suede, glitter and metallic dégradé ombré.

Nine West, the largest brand under the Jones umbrella, is available in more than 2,500 doors worldwide, with more than 1,200 stand-alone and concession doors in 57 countries. In the U.S., the 102 full-price stores see average weekly foot traffic near 3,500 people. There are also more than 150 outlet stores in the U.S. that see almost 4,000 shoppers a week, on average.

Rather than opening additional doors, the brand — which sells more than 20 million pairs of shoes a year — is focusing on its existing retail channels and bolstering wholesale accounts.

This includes a revamping of all full-priced stand-alone stores in the U.S., according to Richard Dickson, president and chief executive officer of branded business at Jones. Every store will take its cue from the revamped flagship, and by 2013, Dickson predicted that all doors will have a The World According to Pumps wall. The wall will also be interpreted online within the brand’s digital flagship, as well as through retail partnerships — such as with Bon-Ton, which has already signed on to install a wall of pumps in its 24 top-performing stores.

The Lexington Avenue location features nine such trend walls, but The World According to Pumps is Nine West’s main story — the most significant category for the brand sales-wise.

“A huge percentage of our business is pumps, but now we’re celebrating it with every color, heel size and material pump. It’s not just a basic. It’s a go-to,” Dickson told WWD.

Trend-driven walls centered around themes like “rocker glam” or “modern bohemian,” make it easier for the consumer to navigate the store. For Dickson, the approach results in a clearly delineated shopping experience, where Nine West is able to narrate what it thinks the consumer needs without dictating the message entirely.

Each retail door will maintain a pump wall at all times as well as a Boot Bar and Ballet Bar of ballet flats. These three trend stories are the foundation of the new concept, with remaining trend walls introduced and swapped out on a regular basis. The back room of the store, dubbed Club 9, has gold sequin wallpaper, pink glitter flooring and houses the brand’s assortment of “party” shoes.

A smaller, 852-square-foot The World According to 9 boutique opened in early September, five blocks south of the flagship on Lexington Avenue, and is the first non-flagship location to adopt the new concept. It features just three merchandised walls — one of pumps and two others that will change monthly.

Nine West is now “owning” the number nine, according to Dickson, opting to use the number in its numerical “9” form over spelling it out whenever possible. It is featured on everything from printing on shopping bags, to the flagship having nine walls, to the recently unveiled product as hero campaign “9W. We Do Shoe.”

This is one of two campaigns that comprise the brand’s marketing efforts for fall in print, outdoor, in-store, digital and social channels. So while the product is the focal point of “We Do Shoe,” “Nine and the Gang” looks to ignite and inspire groups of friends through their taste in footwear. Dickson hopes “We Do Shoe” becomes to Nine West what “Just Do It” as a slogan has catapulted into for Nike.

“How do you make yourself a culturally relevant brand?” Dickson asked, before answering, “You integrate entertainment.”

Nine West is tapping into the pop culture and ever-growing reality ether, which began with the sponsorship of “America’s Next Top Model: College Edition” that kicked off in late August. Dickson revealed that the brand will serve as the sponsor of the upcoming season of “Project Runway All Stars” which premieres Oct. 25.

The company’s digital portal, Channel 9, launched Aug. 21 and is dedicated to leading the shoe conversation online. The site has already surpassed one million page views, and a corresponding iPhone and iPad app will launch in early 2013.

Digital has been a priority since 2010 and the brand is active on Facebook — where it’s on track to reach 1 million fans this season; Twitter; Pose; Instagram, and Pinterest. Keeping in line with this innovation, an interactive column was installed in the center of the flagship that will allow for mobile checkout and display visuals from the brand’s social feeds. Additionally, the implementation of Near Field Communication, or NFC, technology allows shoppers to access multimedia content instantaneously. This means that a consumer can tap an NFC-enabled smart phone on product to receive information on their device.

Ten percent of business (including retail partnerships) currently comes from e-commerce, but Dickson estimates that number could increase to up to 25 percent of overall sales within three years.

On the international front, Dickson said the U.K. is the fastest growing market for Jones overall since the acquisition of London-based footwear company Kurt Geiger last June for about $350 million in cash.

“It was a strategic move because it also established The Jones Group with an anchor in Europe — and now all of our brands will be distributed through the Kurt Geiger brand,” Dickson said.

The first Kurt Geiger store in the U.S. opened last month in San Francisco, and stores are slated to open next year in key cities like Los Angeles, Chicago, Miami and New York City.

Jones also has a strong presence in Asia; after the U.S., Nine West’s largest market is China. The brand has been present in the country for almost two decades, and it maintains more than 100 points of distribution there.

Part of the new strategy for Nine West is segmentation, as it recognizes that not one size fits all.

Stefani Greenfield, named chief creative officer of The Jones Group in November, is helping Dickson with developing the new Nine West. (In addition to Greenfield, Dickson appointed two more executives to aid in the growth of the company: Scott Bowman as group president of global retail and international development and Kathy Nedorostek, group president of global footwear and accessories, a newly created position effective Oct. 15).

During a walkthrough of Nine West’s Vintage America Collection boutique that opened in Manhattan’s SoHo last month — an extension of a six-year-old line bearing the same name — she said she plans to roll out the concept worldwide.

The different formats being introduced by the brand don’t mean it is lacking in clarity of vision. Ideally, a Vintage America store can open anywhere in the world, and a consumer should be able to walk in and know exactly where they are.

The new Vintage America Format can be seen in the 2,351-square-foot SoHo store which has bright turquoise walls, a rock ’n’ roll wall of framed art and a massive wood-shrouded cash wrap (a collage of locally sourced, reclaimed white oak, cherry, pine and walnut trees).

“This to me is really the ultimate American heritage experience. It’s for the woman who travels — she’s a global gypsy. She starts in New York and ends in New York and in between she’s anywhere,” Greenfield said of her first major initiative since joining The Jones Group.

Ciepluch, who Greenfield calls the muse of this “gypsy haven” (her official capacity is style director at large) was instrumental in conceptualizing the look and feel of the boutique. As part of her “Road to Vintage” road trip earlier this year to cull inspiration, she visited cities such as Austin, Tex., Nashville, Los Angeles, Burbank, Calif., and Brimfield, Mass.