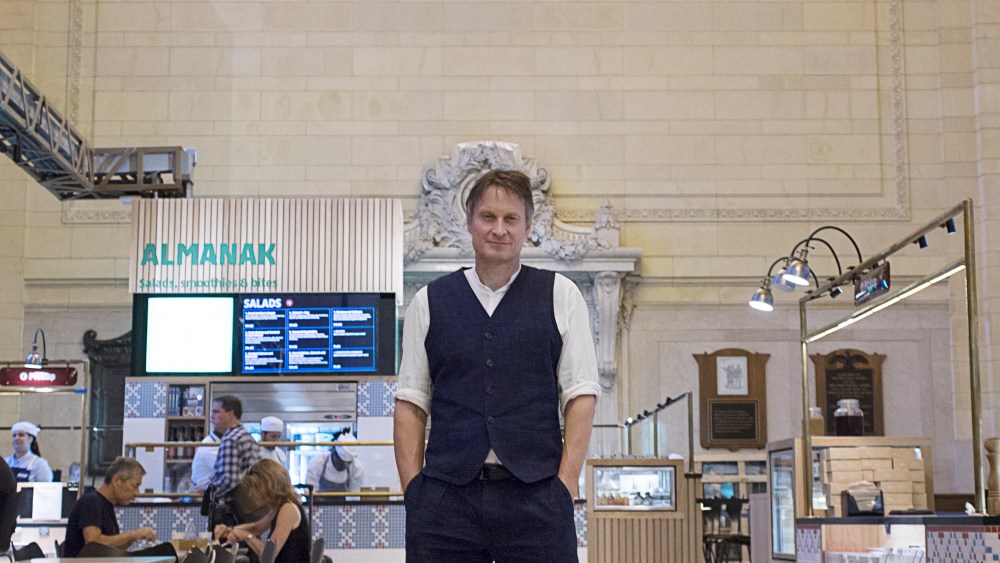 In a matter of eight months and without great fanfare, Noma cofounder Claus Meyer has opened the restaurant Agern and the Great Northern Food Hall in Grand Central Station, and built a 300-person company. Now through his Melting Pot Foundation, could-be chefs are enrolled in its new culinary school in Brownsville, Brooklyn, where a cafe and restaurant will open this fall. And to do all of the above, he uprooted his family from Denmark.

Somehow Meyer still can’t pedal fast enough to get to work each morning. He said, “When I bike my way up Park Avenue and see Grand Central lying in front of my eyes, I have to pinch myself in the arm sometimes and ask, ‘Is this real?’”

The towering Dane earned intercontinental fame through Noma’s three-time world’s best restaurant status and leading the sustainable New Nordic Cuisine movement. But he isn’t about to hog any credit for the plethora of farm-friendly menus and blond wood tables in restaurants. Referring to the New Nordic Cuisine manifesto crafted with Noma cofounder Rene Redzepi and a battalion of Scandinavian chefs, Meyer said, “We did not invent farm to table. What we said was that top chefs and basically all sorts of people have to reconnect with the land. We have to cook in a way that makes sense here and now…If we don’t, then the farmers will be at the hands of Monsanto and big fast-food chains.”

Before New Nordic Cuisine took hold in 2004, “Spanish cuisine had the hegemony in the world. It was very much about molecular gastronomy. There was the idea of using all sorts of chemicals, compounds, techniques and ingredients from the advanced food industry to create textures, foams, gels and substances on a plate in a restaurant that should exceed the will of God. We said, ‘No, no, no — this is wrong. We are moving in the wrong direction. The time has come for chefs to stand up for nature and celebrate what grows here rather than trying to improve it,” Meyer said.

Restaurateur, culinary entrepreneur, food activist, cookbook author, professor, TV host — all apply to Meyer but he is not inclined to describe his job. “Oh my God — I don’t actually know what I’m doing. So that is a very difficult question.” he said. “I tend to trust my gut feeling. If I have an approach, it is to always keep my mind open for new opportunities so I don’t see my company as some sort of encapsulated structure where I have to navigate myself according to plans. I basically have no plans for tomorrow.”

That’s not entirely true. With a 10-year lease at Grand Central, he has promised his family that New York will remain their home base, at least until next summer. His wife Christina Meyer Bengtsson pretty much oversees all design and decor for his enterprises, and her sister relocated to work at Grand Central. Meyer’s eldest daughter has taken a second gap year to ensure the “kanelsnurrer” cinnamon rolls, “tebirkes” poppy-seed danish and other Scandinavian indulgences are just right. The family’s two newly turned-vegan youngest girls created a few smoothie recipes, and they offer unsolicited pointers to their father and Agern chef Gunnar Gíslason.

In the midst of a family vacation in Ibiza earlier this month, Meyer said in a phone interview, “I know where I come from and I never forget where I come from, but I never know what I’m heading for. Because you learn things everyday, you meet new people and I try to bridge a certain consideration for the health of whatever I have initiated in the past with a deep, deep interest in impacting the world in a positive way,” he said. “Of course I know what I stand for. I have a key idea of what I want to do and how I want to do things, and which values are guiding me. But I haven’t come here to teach or to preach anybody anything. I will do my best to do something wonderful but I’ve also come here to learn. And I’m learning a lot every single day. That was also one of my dreams — to come here to learn by exposing myself and my family to another culture, another community, another way of living, another set of values, a different way of doing things.”

Blue Hill’s Dan and David Barber, Mario Batali, Arcade Bakery’s Roger Gural, Mads Refslund, Ducks Eatery’s Will Horowitz and Gramercy Tavern’s Michael Anthony have offered a hand where they can. Within a quarter-mile of his Chelsea apartment, there are 10 restaurants where he wants to pull up a chair. “It’s fair to say the New York food scene is the most vibrant, exciting, delicious and dynamic one in the world. Nothing compares to that,” he said. “Also, the level of competence you find in New York is very inspiring. You find so many people who have invested so much of themselves in some well-defined, narrow niche or field. [You wonder], ‘How do I get the best out of it? How do I connect with these people? What can we do together? What is the partnership that I didn’t see coming that I have to execute?'”

Adverse to the New York schmooze, Meyer said, “I’m not a talker. I’m a doer. I want to use relations. I hate random networking. What I love is to turn serendipity into something that changes my world and the other person’s world. When I see so many wonderful people that I basically would love another five hours to connect with at a deeper level, but I have to run away to the next whatever — that is a little bit stressful for somebody like me. I’m not a very superficial person. I’m a person who prefers fewer encounters with more meaning, and New York is not always like that.”

Gourmands might not picture him as the tennis and badminton instructor he once was, but his interest in teaching just manifested in different ways. “The reason New Nordic Cuisine works so well is that you didn’t have the option to be against it. Nobody in the whole world could be against it, because we were taking nothing from no one. Everything benefits — agricultural exports, the cleanliness of the ground water, tourism, health costs,” he said. “You can formulate similar paradigms in different contexts and they will be equally compelling if done correctly. This can be used in a lot of different industries whenever there is an unrealized potential, a higher level of consciousness, higher level of ethical and aesthetic truth that is not being reached.”

As for whether he told President Barak Obama just that when they met at the White House’s Nordic State Dinner in May, Meyer laughed. “I would have loved to, but I think it would have taken more than the 30 seconds I got.”

Seriously though, he said, “I’m sure a fashion company could do what I’ve been doing in food. A fashion company like Ralph Lauren could decide instead of buying raw material in the poor world and creating a lot of profit in the rich world, they could make the decision to curb itself and give away its key competence to a poor country.”

Singling out Hawthorne Valley Farm, a 400-acre nonprofit in upstate New York, Meyer said biodynamic farming principles and organic agriculture aren’t just booming, people are using them to reinvent communities. “I saw at Hawthorne the old-school way of organizing farmland, but also educating and a big commitment from the people living outside the farmland. Basically, it looked like a new way of organizing our lives based on the principles of the past — belongingness and care.”

Committed to helping the down-and-out rebuild their lives, Meyer’s foundation has funded cooking schools in Danish prisons and opened one in La Paz, Bolivia, to run what has become a buzzy restaurant, Gusto. Such hybrid pursuits ring true with New Yorkers, Meyer said. “I get the feeling a lot of young American people want to combine the virtues of capitalism with the ideas of fighting for something that means something to other people and benefits the world,” he said. “Of course you also see the opposite in America. You see greed and brutal capitalistic structures. I just happen to be inspired by the light and not the dark. I believe in helitropy — instead of spending your life criticizing other people or structures, you believe in spending your life, showing the light, searching for the light and connecting other people around that idea of moving towards the light even if you see people who come from a dark past or run evil empires.”