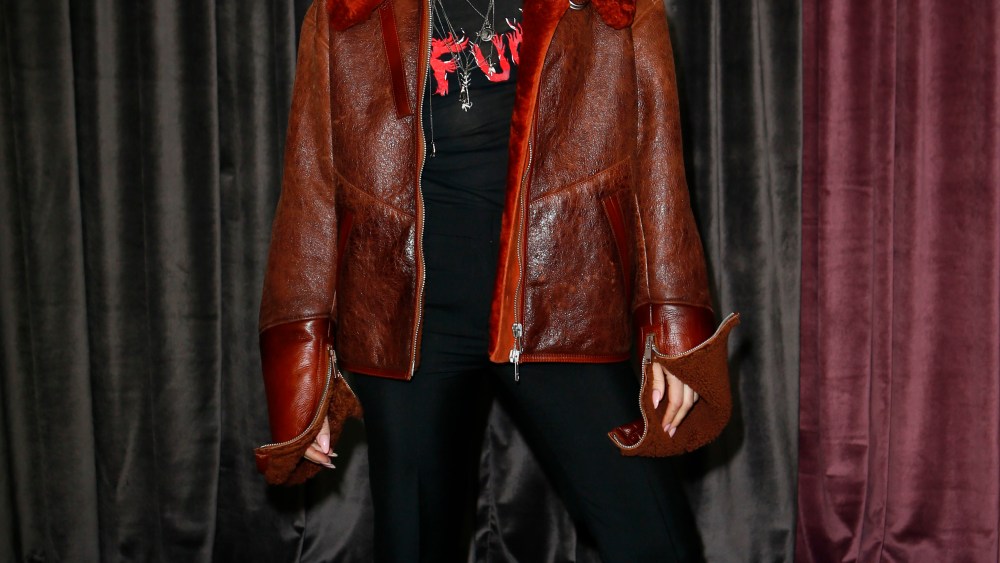 LIVING COLOR: Sweeping out of the icy rain and into the grand Palais de Justice for the Givenchy show on Sunday morning, Karen Elson — dressed in a fiery orange and pale pink silk ensemble by the house — injected a much-needed dose of warmth and color into the scenery. “I clearly dressed against the weather, without even realizing it,” quipped Elson, who is in the early stages of writing her next album, but is also enjoying getting back into the fashion world. “I didn’t really do much fashion last year, maybe toward the end of the year; I shot a Tom Ford campaign and did a few shoots here and there, but I’m actually very much enjoying having a little fashion moment, because both are part of my life.”

Noomi Rapace had matched her rust orange shearling jacket to her hair color, which is going through a transitional phase. “It’s kind of peachy, orangey,” laughed the actress who presented an award at the Césars — France’s equivalent of the Oscars — on Friday. “I was very aware of the weather when I did my fitting, I was, like, ‘I don’t want to be cold,’” added Rapace, who will soon be heading to Australia to start filming the psychological thriller, “Angel of Mine,” helmed by Kim Farrant.

Dressed in all black, Romy Madley Croft, who’s from London, hadn’t noticed the weather. “It’s fine, I’m used to it,” she shrugged. Having just wrapped a 15-month tour, the singer, who will be manning the decks tonight at the Givenchy after party, is taking some time off before hitting the festival circuit this summer. “It’s nice to have a bit of a life again and come and do something like this. I just wanted to have a change, meet some people and have some fun.”

Among his latest projects, Idris Elba, who attended with his fiancée Sabrina Dhowre, said he has “stepped into the world of comedy” with a sitcom called “In the Long Run.” The series follows the Easmon family, which has settled in England after having arrived from Sierra Leone. “I’m very excited, it’s based on my childhood. I created it and cowrote some of it.”

Arizona Muse, who attended the show with her husband, Boniface Verney-Carron, and son, Nikko, said she’s readying to announce a “major” project in April, meanwhile. “Stay tuned,” she said, hinting it has “something to do with clothing and design — my own designs.”