Ntwrk, New Era and PSD Underwear are partnering with Warner Bros. and artist Evan Rossell on a limited-edition assortment of apparel and accessories tied into the reimagining of a basketball court in Brooklyn.

The re-creation of Tune Squad Court at Rodney Park North in Williamsburg is part of the Get Animated Invasion, an international series of activations featuring Warner Bros. characters. At Rodney Park, the court was refurbished and Rossell, an Orange County, Calif.-based artist, illustrator and creative director who has worked with Nike, Levi’s and Red Bull, painted a Tune Squad-themed mural and designed backboards and custom basketballs.

The Looney Tunes characters first appeared as the Tune Squad in the 1996 film “Space Jam” with Michael Jordan and will be revived in the sequel, “Space Jam 2,” due to come out in the summer of 2021. The film starring LeBron James, actors Don Cheadle and Sonequa Martin-Green, and NBA stars Anthony Davis and Klay Thompson was first announced in 2014 and began filming in June.

The capsule collection will be available for purchase at the event through a digital product hub that can be found by scanning a QR code. It is also on the Tune Squad Court web site. The court will be open to the public on Aug. 2. 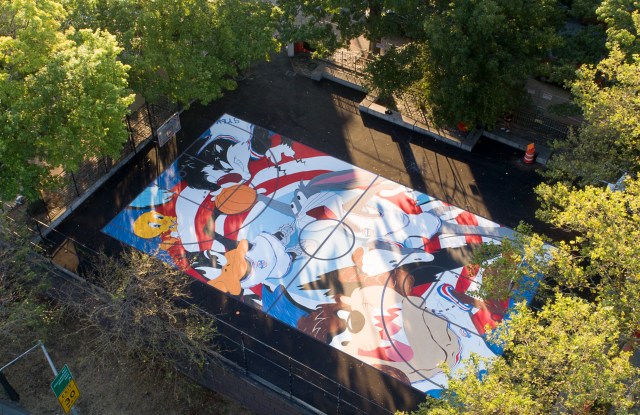