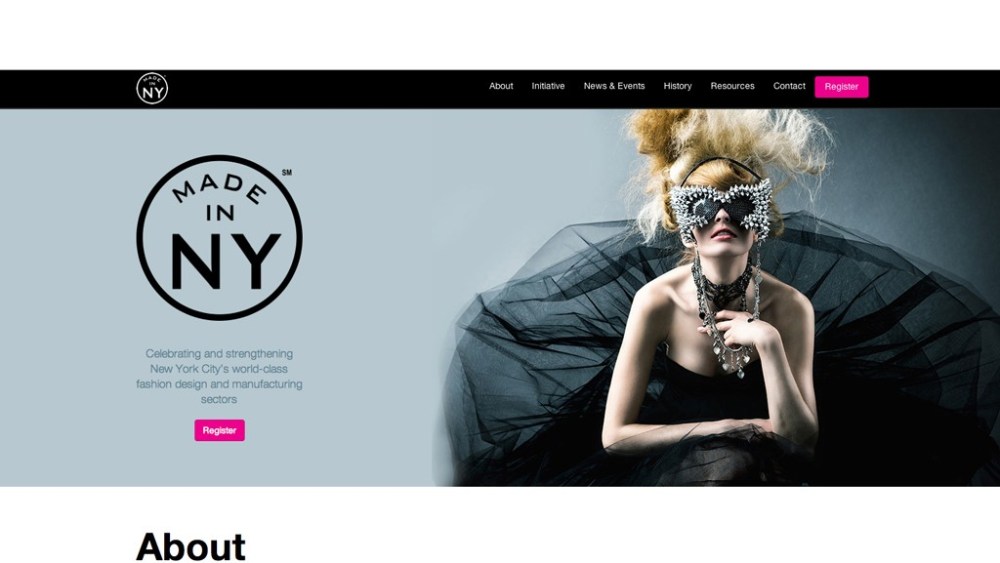 Made in NY is having a fashion moment

The mayor spoke at a press conference at Milk Studios to launch MADE, a six-year-old organization that provides about 35 New York City designers with space, production and other resources to show their collections at no cost during New York Fashion Week.

During the press conference, the mayor revealed the city has decided to name a street in the Bronx in honor of Oscar de la Renta. It will be at the intersection of East Fordham Road and Creston Avenue. “He brought such joy in all he did. He will be forever ingrained in the fabric of this city,” said the mayor.

“Fashion week has become something extraordinary for the energy, the artistry, the glitz and glamour, this industry is more vital than ever and employs 180,000 people,” the mayor told the crowd. “That is a lot of people. It pays $11 billion in wages and generates $2 billion in tax revenue annually. We say thank you. Fashion Week attracts people from all over the world, and makes us even more of a capital and generates over $900 million for the city.

“We know we can do more, and we want this industry to grow,” de Blasio added. “We want to give more opportunity [to] people who haven’t had economic chances, and we want it to be all over the five boroughs. When you believe in something, you invest in it, and the city of New York is tripling our investment in fashion initiatives.”

The goal, he said, is to strengthen the city in every phase of the production cycle, from the first idea to the garments being loaded onto the trucks, while also investing in home-grown talent “which will keep us competitive and a leader in fashion.”

The $15 million suite of new initiatives will be largely comprised of public-private partnerships, spearheaded and financed by the New York City Economic Development Corp., with additional funding from a diverse group of industry partners. Some of the programs are already underway, while others are new.

The new public-private programs to support and strengthen the city’s design and manufacturing sectors include:

• A two-year, $5 million creative marketing campaign, launching this year, that will leverage traditional and digital advertising media to showcase the city’s fashion companies.

• Madeinnyfashion.nyc, a digital hub created by NYCEDC that went live Wednesday. The Web site is devoted to promoting local designers and manufacturers, highlighting New York City-made products and providing the fashion industry with resources, information and news and events.

• An additional $5 million in programs for manufacturers which include Capital and Workforce Grants that build upon existing programs to empower local production facilities to implement the latest technology and training programs for employees. New seed funding from public and private sources — such as Andrew Rosen, chief executive officer of Theory, who is a champion of this — will help companies that use advanced technologies or offer services not easily available in the city’s fashion manufacturing sector, such as knitwear.

• Earmarking $4 million for new and expanded design initiatives that will help designers increase their visibility within the industry by providing space at trade shows, as well as pop-up shops and partnerships to give them more exposure to the public.

• An awards program that recognizes Made in NY designers who have demonstrated exceptional promise and ability. It will be held in late 2015 or early 2016.

• A new $1 million program, sponsored by the city, to connect aspiring design students in the industry via scholarships to study fashion-related disciplines at New York City-based educational institutions. It will also offer fully funded internships at fashion companies for students to gain exposure to the industry. Scholarships will be given for pre-college programs (at the high school level) as well as college programs.

As for specifics, an ad campaign will be launched this summer. The NYCEDC, which has an in-house marketing department, will work with the city’s creative arm, NYC & Co., to develop the campaign. The city will also develop retail activations around New York, which could include pop-up retail shops and partnerships, kiosks in Grand Central Terminal, spaces within flea markets and prime retail markets. The shop would provide a fully branded “Made in NY” retail experience, which would showcase products from New York City designers.

The Production Summit would run in the fall after New York Fashion Week. The hope is that it will become an annual event. In addition to highlighting best practices and identifying innovation solutions, it looks to develop an electronic platform to allow designers to more easily connect with local production facilities, and expand worker training sessions so garment workers can stay up-to-date in their production skill set. To date, the city’s Fashion Manufacturing Initiative has granted more than $1.1 million for equipment upgrades and workforce development at 13 New York City manufacturing firms. The city’s existing Fashion Production Fund has already awarded a total of nearly $1 million to 11 designers to help fulfill purchase orders.

After a briefing about the initiatives, Steven Kolb, ceo of the CFDA, said, “I believe that Mayor de Blasio and the administration have, in their one year in office, really demonstrated a belief in the importance of fashion as an industry both in terms of its economic impact and its ability to employ people. From early on, they have backed that belief up with support.”

“Knowing that the mayor was going to make this announcement tonight, I knew it was a lot of initiatives around Made in New York and further support for fashion. I didn’t know the specifics of it, and it’s good to hear that,” Kolb said. “The execution of it and the impact of it will be based on how much everyone puts into it. As an organization, CFDA is committed to supporting the mayor on those initiatives, specifically where it relates to programs we’re involved in.”

Mazdack Rassi, cofounder of Made Fashion Week and Milk Studios, said he’s excited about the programs that de Blasio outlined. “The awards show is really great,” adding the city has similar events for tech and film, and it would be an extension into fashion.

He also praised the pop-up stores concept, especially as a way to use empty retail spaces that aren’t leased. “Perhaps the city can come in and curate those empty spaces with young designers. It can be so vibrant,” Rassi said. He also liked the idea of an ad campaign. “We are a creative content company, so when we hear ad campaigns, we are always excited. There is a value system when you look at something that says, ‘Made in Italy,’ or ‘Made in Paris.’ There was always a branding problem with ‘Made in New York,’ and we do need an ad campaign to correct that,” he said. “There should be a premium attached to a garment that says, ‘Made in New York.’”

Rassi said Wednesday night’s event marked the first time the city’s mayor had attended Made Fashion Week since it started six years ago. “It’s a big deal for Made Fashion Week and our corporate partners who have supported Made. It does help American businesses and New York City businesses. We don’t just look at them as designers, but small businesses,” Rassi said.

Last month Coach Inc. pledged $500,000 to the Fashion Manufacturing Initiative, as reported. Coach’s pledge, through Coach Foundation Inc., matched previous commitments by FMI founding partner Rosen, and it joins Ralph Lauren as copremier underwriter. FMI is a $3 million public-private program aimed at supporting local fashion manufacturing. The City of New York has pledged $1 million to the program, through the NYCEDC. The CFDA, through program chairman Rosen and other partners, has raised $1.9 million to date in both financial and in-kind support for the program. FMI’s funding assists fashion firms in manufacturing, updating outdated facilities, training new workers and finding locations to produce.

Last December, Glen unveiled a $3.5 million investment in the Manufacturing Innovation Hub for Apparel, Textiles and Wearable Tech, a fashion manufacturing and design hub in Sunset Park, Brooklyn, and said City Hall wants to take the concept into all five boroughs. The facility is expected to be operational around June 2016 and eventually involve about 30 companies and 50 designers to create or retain about 300 jobs. The Manufacturing Innovation Hub will also be the new headquarters of Manufacture New York.

“The Manufacturing Innovation Hub is part of a broader economic strategy. Fashion manufacturing already accounts for 31 percent of all manufacturing in the city, and these are quality jobs. We want to do everything we possibly can to invest in the skills necessary to continue to grow the industry. We want every fashion sector and every borough in the city to become part of this amazing story,” Glen said at the time.