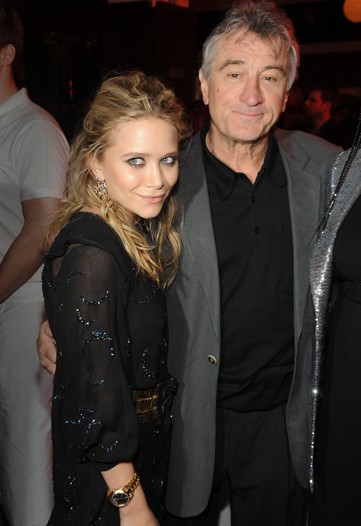 Chanel went the classic route Thursday night when it hosted its annual Tribeca Film Festival dinner at old time downtown haunt Odeon. And for some in the crowd, it was a homecoming of sorts.

“I used to come here on dates before I was married,” said Molly Shannon, in town from LA for 48 hours. Shannon was accompanied by husband Fritz Chestnut, one of ten artists being honored that evening as part of the festival’s Artist Awards Program. “I’m down with the art crowd,” she said.

Danielle Steel was on a date of her own with daughters Victoria and Vanessa
Traina.

“I don’t think I’ve been here before,” she remarked.

“Yes, you have — you took us here when we were younger,” said Victoria.

“Is it really dorky that I’m so excited to see De Niro in person?” asked Julia Restoin Roitfeld as she eyed the actor.

In keeping with the night’s theme, each guest received a hefty cocktail tome of a different artist’s work.

“Oh, that’s a really good book,” said Dree Hemingway to Olsen, who was
holding one on Francesco Clemente.

After a dinner of roast chicken and steak, guests lingered so long the Odeon staff had to turn up the lights to get them to leave. Mamie Gummer and others headed down to the Box to continue the party.