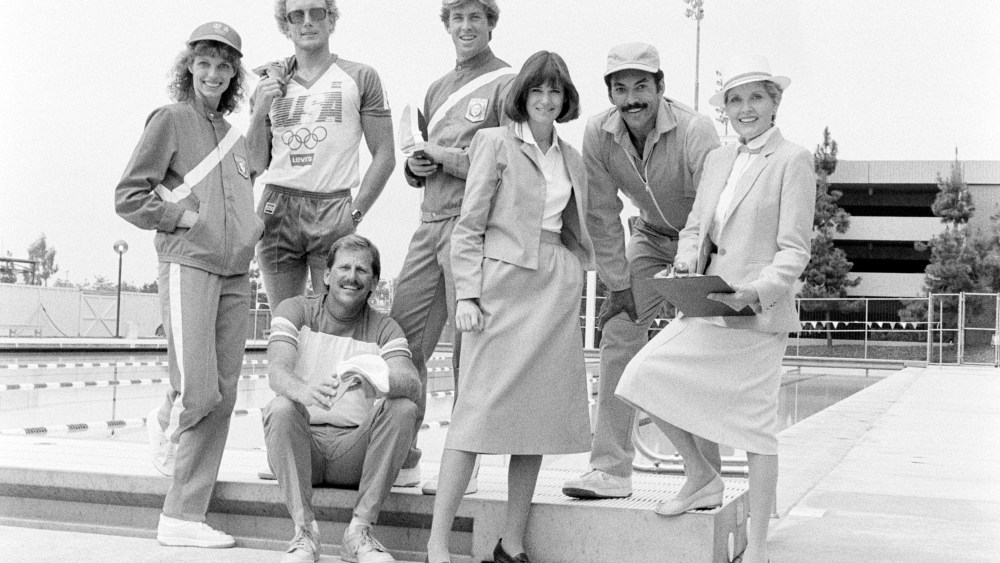 The Tokyo Olympic Games begin Friday and though they’re really about sports, they’re also a little bit about fashion.

The Games offer a big brand-building opportunity in the short span of two weeks. For fashion brands and designers, outfitting Olympic teams can be a game-changing event.

Fashion’s long history at the Games began with the first modern International Summer Olympics, which took place in Athens, Greece in 1896. Initially, the business-inspired attire — a single button blazer worn with tailored pants for men and a skirt for women — didn’t yield much commentary among the crowds in attendance.

All that would change when the American fashion industry gave the team uniform a much needed update.

A WWD article published ahead of the 1956 Winter Olympics in Melbourne, Australia, with the headline “Fashion Industry Provides Wardrobes for Olympic Teams,” highlighted the debut of a complete spectator and travel package from notable American designers and businesses, giving way to what has become one of the most watched portions of the Games, the Parade of Nations.

“The uniform gave the American team an edge in the competition,” WWD wrote at the time.

A package for a female athlete included a wool jersey coat for travel and parade from designer Bonnie Cashin for March and Mendl; a parade uniform featuring the Olympic patch by suit maker Handmacher Vogel Inc., complemented by red leather pumps from Town and Country, and an undergarments package with contributions from Berkshire Knitting Mills. A package for a male athlete consisted of a jacket and shorts from Pendleton Woolen Mills, and socks from Esquire Inc. There were also tailored pajamas by Nite-Kraft, not foregoing any aspect of the athletes’ time at the Games.

The modern uniform package not only promoted the American and European fashion industries, but also gave design firms an ideal licensing opportunity. With designer contributions vetted by the U.S. Olympic Committee, outfitting thousands of participants including commentators, fashion has become a key addition to the visual aspects of the Games on and off the field.

Here, WWD looks at some of the designers who have helped dress Olympic athletes over the years.

American designer Roy Halston, who rose to international fame after the Battle of Versailles in 1973, outfitted the U.S. Olympic participants for the Pan-American Games of 1975, then licensed his name for the 1976 Innsbruck Winter Games and the Montreal Summer Games. Halston promoted his Olympic collection via a televised fashion show. The full package included on-trend flared-legged pants, luggage and the first leisure outfit. The leisure outfit, he told WWD at the time, “would bring the members from the hamburger stand to a black-tie party.” The designer’s televised fashion show was the perfect vehicle to gain consumer participation. Ever inventive, Halston turned products for athletes only into retail sales by removing the Olympic insignia on the same collection and selling it at Montgomery Ward’s department stores. The move increased brand visibility and gave consumers an invitation to participate in the Games.

American companies continued to lead the Olympic fashion parade when casual activewear and denim took to the podium in the 1980s.

Levi Strauss & Co.’s contribution as the official outfitters of Team USA began in 1979. America’s decision to boycott the 1980 Summer Games in Moscow halted the brand’s second contribution, which was a missed opportunity for participants and the public to wear the jeans. Nevertheless, Levi’s return for the 1984 Summer and Winter Olympics helped launch an active sportswear line, and provided universal clothing options in T-shirts and denim jeans with the Levi’s logo.

In 1988, Adidas, which was then the U.S. team’s official outfitter for the Summer and Winter Olympic Games, worked with athletes to offer more than 30 items of clothing. The package included a modification to the brand’s signature sweat suit for all participants.

Public interest in the spectacle surrounding the Opening Ceremony brought ready-to-wear firms back to the Games in the 1990s.

J.C. Penney and Reebok were at the forefront of the licensing boom. Penney’s hired New York designer Henry Grethel to create the team uniform for the opening ceremony of the 1992 Barcelona Summer Games. Grethel became the first mainstream designer in the role. His choice of a fuchsia blazer, worn with a fuchsia and cornflower blue patterned skirt, stepped away from tradition and was only contracted for the Games. The upside was the insurance of name recognition, the designer told WWD months before the Olympics.

The official roster of outfitters for the 1992 Summer and Winter Games also included Reebok, which designed a 24-piece collection for the athletes with new material advancements. Their water-repellent nylon taffeta sweatshirt for the medal ceremony was gold. There were also limited-edition contributions from Cooper Sportswear of Newark, N.J.; Bausch & Lomb and Seiko Corp., among others, according to a WWD interview with the U.S. Olympic Committee at the time.

That same year, Polo Ralph Lauren debuted at Calgary’s Winter Olympics. Although the company decided to forgo a lavish advertising campaign, the wardrobe provided to the U.S. team for the opening and closing ceremonies of ranch-style blue jeans, a denim jacket and T-shirts with the American flag and Olympic rings was an unmistakable opportunity. In 2008, Ralph Lauren’s all-American style made his brand the official outfitter for the U.S. Olympic teams. His unveiling of the Team USA label continues to stand out as part of the American fashion industry’s participation in the Games.

The Atlanta Games were an anticipated moment for the 1996 Summer Olympics, where Reebok and other sportswear brands drove sponsorship. A spotlight on popular athletes like Florence “Flo Jo” Griffith Joyner and Michael Jordan, who promoted Hanesbrand, and gymnast Nadia Comaneci for Swatch abruptly ended when Atlanta’s Centennial Park suffered a pipe bomb attack that killed one person on the spot and injured more than 100 others. The Olympic Committee shifted the focus from celebration to safety.

For a moment, the importance of fashion during the Opening Ceremony took a step back, but would flourish in the next four years and beyond.

Toronto-based Roots, the Team USA outfitter for the 2002 Summer Olympics, made its mark with a blue beret that became the most coveted item of the Games that year. In 2004, the brand revised the beret to complement a selection of high-performance retro-inspired skiwear styles for the Athens Games. And for the first time, the official outfit of the U.S. Olympic team would be sold in Target stores. Nike made its appearance at the 2004 Games off the field, taking over for Adidas in outfitting teams for the medal ceremonies and providing loungewear for down time in the Olympic Village.

Fashion hardly forgoes a marketing opportunity — and international recognition for the industry’s contributions to the Games came when Giorgio Armani made his Olympics debut in 2006.

Armani gave the opening ceremonies for the Turin Winter Games a fashion edge. With the help of Turin-born model Carla Bruni, dressed in Armani Privé holding the country’s flag, striding alongside actress Sophia Loren holding the Olympic flag, the image helped solidify fashion’s role in the opening and closing ceremonies. In 2012 for the London Games, Armani, now the official outfitter for the Italian Olympic and Paralympic teams, seized the opportunity to expand into performance wear with his EA7 Emporio Armani collection, unveiled for the 2018 Winter Games in Pyeongchang.

Again the official outfitter of the Italian Olympic team at the Tokyo Games, Armani will dress athletes for the opening ceremony. They’ll parade outfitted in an EA7 Emporio Armani tracksuit, made of recycled tricot polyester and with the opening verse of the Italian National Anthem inside the jacket. The items are also on sale in Emporio Armani stores, multibrand stores and online.

“After the immense satisfaction that our athletes have recently given us, I will be following the Olympics with great interest and pride. I am delighted with this renewed collaboration, which confirms my deeply felt connection with sport”, Giorgio Armani said in a statement unveiling the looks.

International brands and designers remain important elements of outfitting teams at the Games. The list expanded when Yohji Yamamoto Y-3, in collaboration with Adidas, supplied clothing for the entire U.K. team at the 2008 Summer Games in Beijing. And again when Stella McCartney’s first Olympic collection nabbed the spotlight in 2012. The designer worked with Adidas to outfit the British Olympic and Paralympic teams, as well as a popular range inspired by runway trends for the public.

The fashion frenzy continued at the 2016 Summer Olympics in Rio de Janeiro. Christian Louboutin’s distinctive red soles inspired the color of the Cuban Olympic delegation’s uniforms. Lacoste blended French heritage with materials and technology for the team from France, and accessible H&M fashions for the Swedish team added to the Opening Ceremony.

For the Tokyo Olympic Games starting Friday, Ralph Lauren will outfit athletes with cooling jackets designed to counter the temperatures that could make this the hottest Olympics on record. Kim Kardashian’s Skims brand will make the underwear for Team USA, and on the international scene, Telfar Clemens will be sponsoring and designing the uniforms for Team Liberia while Uniqlo will supply  the uniforms for the Swedish Olympic and Paralympic teams, the first time the Japanese brand has ever outfitted a national team.

And although some years are more visually appealing than others, and this year’s opening ceremonies will be held without fan participation, much anticipation still surrounds the virtual fashion show of national pride.