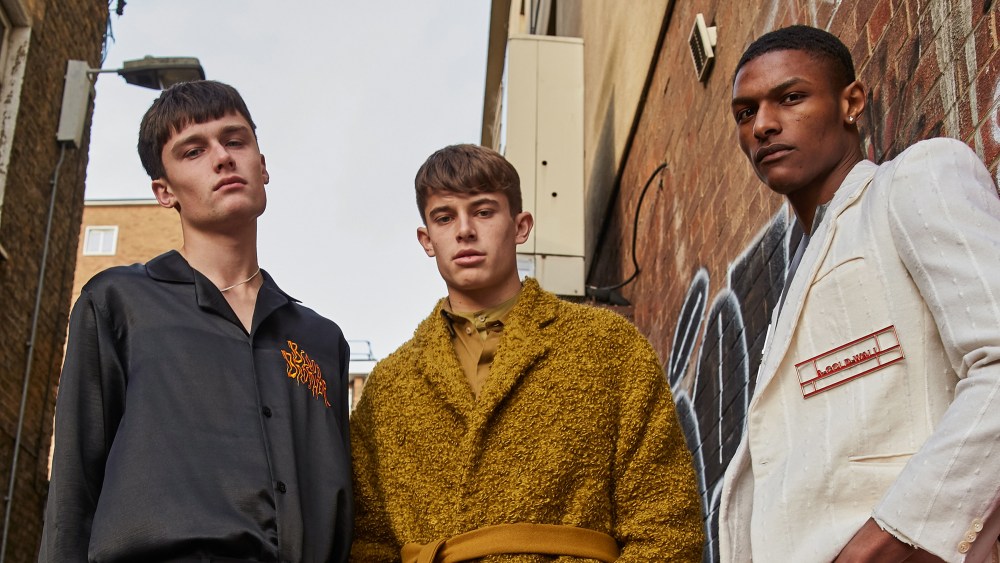 London is known for its streetwear scene, composed of a mash-up of subcultures including hip-hop, skateboarding and surfing. The popularity of the urban market has grown recently with obscure labels becoming more mainstream and newer brands launching. Here are a few designers on the rise who are getting set to present their collections during London Fashion Week Men’s.

A-Cold-Wall
Samuel Ross named his label A-Cold-Wall as a nod to Britain’s melting pot culture. “The inspiration behind the name came from the familiarity of environments,” the designer said. “Multiple class systems interact, with the people overlapping and integrating.”

Calling London a “mishmash of high/low property piled on top of each other” with its “distant relationships of working class and upper middle class areas,” these influences appear in A-Cold-Wall’s deconstructed workwear that includes oversize scarves used as a utility holster — a bestseller.

The 25-year-old Ross — who launched his label in 2015 — was born and raised in South West London and studied graphic design and contemporary Illustration at DeMontfort University in Leicester.

Before delving into fashion, he worked on graphic and product design at Imperial Design GB and Story Worldwide and dabbled in homewares, commercial buildouts and advertising campaigns. He also worked as a street artist and on obscure art films before taking the role of Virgil Abloh’s design assistant. He worked with Abloh for three-and-a-half years, taking on various projects at Off-White, Hood By Air, A.P.C. Kanye collection and Stussy before launching his label.

“Brutalist, raw and contrasted” is how Ross describes the aesthetic. Its target customer is “not necessarily a man, it’s more an individual who’s in tune with layered ideas and has an appreciation for design. They are individuals who pick up on the subtle references and color choices.”

Ross said future plans for the brand, which will showcase its range on Friday at 8 p.m., include footwear and homeware objects with a focus on sonic installations. Earlier this year, the designer unveiled a furniture and apparel installation as a part of CIFF Raven at Copenhagen Fashion Week. “The goal is to create a world people can slip into in the form of garments, but also live within through other facets and daily interactions.”

For his next collection, he’ll be introducing new pieces for women while experimenting with fabrics such as silk, nylon and lace.

Sociopolitical topics have always been important to Khalid Al Qasimi and it shows in his ath-leisure collection Qasimi. The line, which mixes Middle Eastern dressing with a pared-back military aesthetic, is influenced by everything from art and architecture to political issues.

As a result, the line that he will present at 12:30 p.m. on Monday at Somerset House will focus on current events. “I think this year more than any other, those are conversations we all need to be having,” he said. “So part of the narrative of the collection will be about the rise of protests and riots.”

Born in Sharjah in the United Arab Emirates and raised in the U.K. Qasimi, is the son of Dr. Sheikh Sultan bin Mohammed Al Qasimi. He studied Hispanic Studies and French literature at University College London then architecture at the Architectural Association and then studied women’s wear at Central Saint Martins. The Emirati designer started his women’s range in 2008 before launching his men’s offering in 2010.

Qasimi said the construction of the garment is paramount to him. “Everything has a purpose and function,” he said. “I try to steer away from decoration. Silhouettes are fluid, oversized and languid fresh.”

These looks appeal to a wide range of men, he believes, who are “looking for a beautifully designed piece of clothing that is all about cut, construction and fabric.”

The designer doesn’t think there’s such a thing as the “typical” Qasimi man “purely because customers are so a-typical. But from the research we’ve done, they are educated, well-informed on all sorts of issues,” he said.

Qasimi said he is also strategizing expansions of his women’s range, looking at possible accessories collaborations as well as homewares.

Blood Brother
To “express togetherness,” Nicholas Biela and James Waller — who launched their company in 2011 — named their label Blood Brother. “The name represents the notion of one person relying on another to be able to achieve their ambitions,” said Biela.

Born in the same hospital in Sutton, Biela grew up in Canterbury while Waller was raised in South West London. The duo met while studying at the London College of Fashion — Biela studied men’s wear while Waller studied business. Biela worked for brands in the past including Jean Pierre Braganza and Martin Anderson, while Waller worked at Diesel and J.Lindeberg.

“Blood Brother aims to engage men who enjoy fashion with some substance,” said Biela. “Our customer is knowledgeable about quality and interested in products that are independent, while wanting clothing that suits living in an increasingly hybrid lifestyle, work/play, night/day. Smart casualwear and relaxed formalwear help keep our contradictions accessible.”

Biela said that they seek to offer a modern take on men’s wear. “Key pieces from spring 2017 were our tailored looks using vintage patterns,” said Biela. “Bringing them up to date we felt really energized.”

For the fall collection, titled “Thames,” the duo will be experimenting with prints. “We used old survey maps and mixed with newer digital maps — most notably Google maps,” Biela said. “Our take on London locations relative to the river are brought to life with plentiful embroidery embellishments added to key shapes.” For example, tailored pieces in exploded corduroy and waxed cotton have straps and utilitarian pockets that blend into an aesthetic that is distinctly Blood Brother.

Future projects for the label, which will be presented at 10:30 a.m. on Monday at the BFC Presentation Space, include collaborating with Guinness on a range that will be stocked exclusively at Harrods.