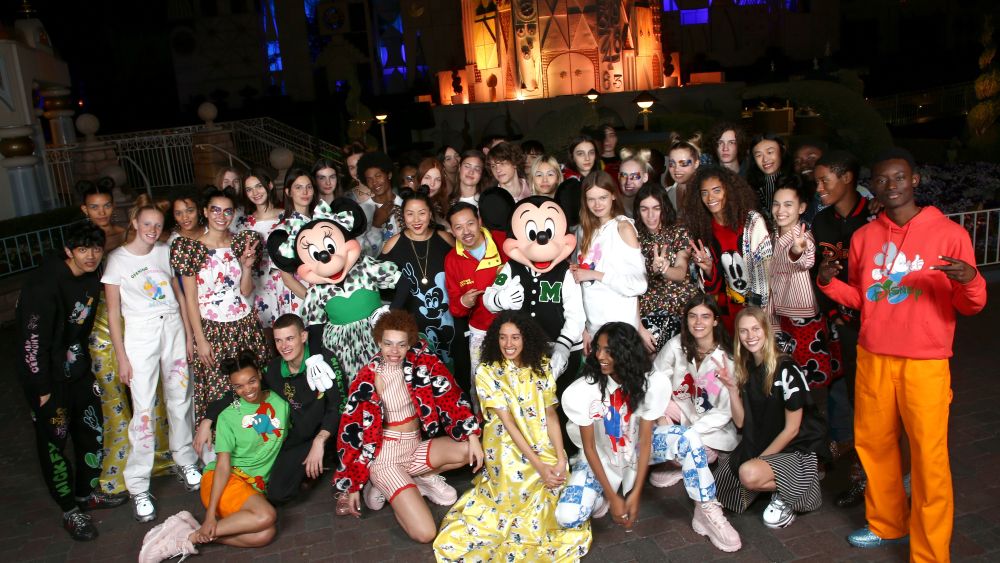 ANAHEIM, Calif. — Well, it’s going to be pretty hard to top Disney after Opening Ceremony’s Carol Lim and Humberto Leon set precedent for what it means to entertain, immerse and, oh yes, present a new collection with Wednesday night’s fashion show at Disneyland.

The label took over Mickey’s Toontown — a themed land within the main park transporting guests into a cartoon world where they could cruise the homes of Mickey and Minnie or ride on Gadget’s Go Coaster, among other attractions — for the brand’s spring 2018 presentation and unveiling of a Disney capsule collection timed with Mickey Mouse’s 90th birthday.

“The idea is we’re going to be kicking off his birthday as a worldwide celebration with this event,” Leon said.

The event also marked the first time in four decades a fashion show has taken place at the park.

To See All the Celebs in the Front Row and at the After Party, Click Here.

Guests, most of whom were coming from Los Angeles, were urged to arrive a few hours early to allow for traffic, which during rush hour clocked in at nearly two hours. Of course, they were given full run of the park starting at 6 p.m. until the show’s planned start time of 9 p.m.

Curious onlookers began to take note of the fashion crowd with their trenchcoats, faux-fur jackets, booties and motorcycle jackets gathering outside the Toontown gates as “It’s a Small World” played on a loop. Disneyland cast members milled around to ensure order, right down to the stroller parking outside one attraction. Minutes after one employee whipped the strollers into uniform rows in a move that would have made Walt Disney proud, one guest advised to a confused parent looking to claim her carriage, “They moved the strollers so…yeah.”

When attendees were finally admitted into Toontown and seated, what was presented on the cobblestone catwalk was a collection in two parts.

First up was spring, with models filtering out of Mickey’s house dressed in pieces inspired by California in the Seventies. The aim was to bridge a number of ideas ranging from Earth, space and time using waterproof fabrics and neoprene along with macramé as vehicles for those themes. Marine animal illustrations from Christian Riese Lassen appeared as prints on some of the collection’s dresses, tops and sweatshirts.

Once the spring lineup wrapped, a marching band and Mickey and Minnie — of course — came out dancing as a segue into Opening Ceremony’s Disney collaboration.

Some of the models couldn’t help but smile as they marched out wearing items from the capsule, which included faux-fur jackets and bags, patchwork sweaters, pants, letterman jackets and jersey dresses, some of which bore hand-drawn and hand-stamped prints of Mickey.

Lim, after the show, said it was about “taking [the collection] into areas that I think [Disney] hasn’t even gone before, and it was superexciting.”

“I haven’t seen a Mickey gown,” Leon added, pointing to the jersey dress Lim was wearing from the capsule.

Not only was the event historic, but the collection itself represents the first time such product is being sold within the park. It will also be available for sale through Opening Ceremony and Disney’s online store in addition to the Disney Cruise Line.

A portion of the collection went immediately on sale after the show, while the second delivery is due out in October.

“We always think how is this going to exist in the future and we want to make sure that what we did today really kind of holds its own stamp in Mickey’s history,” said Leon, who donned a Mickey tie and cummerbund to his senior prom.

“Oh, it was absolutely beautiful,” gushed singer Halle Bailey. “I loved all the colors and how flowy everything was.”

The singer, who makes up the R&B duo Chloe x Halle with sister Chloe Bailey and is a recent addition to the show “Grown-ish,” said she was hoping to go on some rides.

“Orange Is the New Black” actress Laverne Cox was another Disneyland first-timer and had nothing but praise for the presentation.

“I loved it. I loved it here. I’ve never been to Disneyland so Humberto and Carol brought me to Disneyland for the first time,” Cox said. “I loved the hoodies and the sweaters on top and dresses on the bottom. The sneakers reminded me of the early Nineties club scene, which I freaking love. I loved it. We made notes of the things that we want.”

Once the show ended, the real party revved up.

Attendees noshed on mini cheese and pepperoni pizzas from Daisy’s Diner, while Lucky Blue Smith and sister Pyper America Smith stood quietly mingling near Clarabelle’s churro outpost. Meanwhile, Tommy Dorfman posed for a picture with Goofy while Chance the Rapper — who wore his mouse ears for a good portion of the evening — posed with Lim and Humberto. Others rushed to board the rollercoaster, including singer Stéphanie Sokolinski, who goes by Soko, as one person from her crew declared, “After this we’re getting a pretzel.”

Those spotted leaving the party early to board the train to Main Street did so clutching bags of popcorn and balloons, with some still wearing their mouse ears.

Even as the party rocked on, the show’s completion was bittersweet for Lim and Humberto.

“Yesterday when we saw the trumpet players [practicing for the show] and them coming to play Mickey’s song, we started crying because it’s such an amazing moment,” Leon said.

“You don’t get sick of that,” Leon said. “So it’s sad for us because it was such a fun collection to work on. We’ve been here living and breathing Disneyland with the whole team.”

Still, they’re drawing out the fun for at least one more day, Lim said. “We’re spending the whole day here tomorrow, too, with our families. We’ll go on all the rides.”