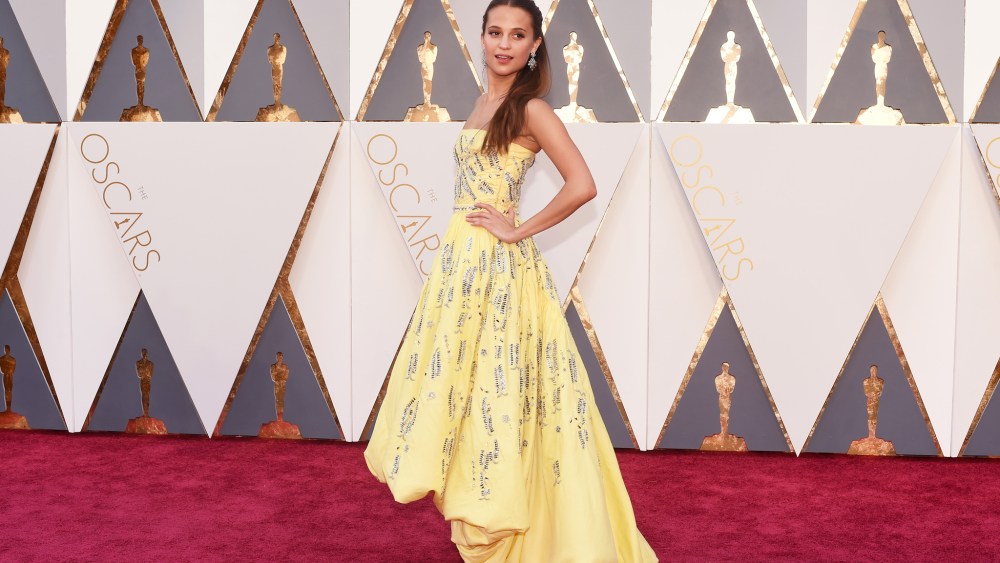 The 88th Academy Awards red carpet is the most widely broadcast – and commercially influential — runway in the world, but it’s also a treasure trove of stolen moments if one looks past the blinding flashbulbs directed at some of the world’s most glamorous and beautiful women and men. The number of deep V-neck gowns and thigh-high slits on display meant that an awful lot of movie stars were left tucking in their bosoms, tugging up their dresses, or placing hands strategically while walking.

“I feel like I’m popping out,” Charlize Theron, in a deeply cut Dior, told Emily Blunt while they were waiting in line to have their photos taken. A quick glance south and she stepped in front of the Oscar signage to pose like a pro. Ditto for Cate Blanchett in Armani Privé, who did a quick décolletage check before following suit.

The pendulum then swung toward those who had no chance of spilling out of their tight bodices. “I’d hug you, but…” Sarah Silverman told Steven Spielberg, her arms stuck midair as she mimicked suffocating in her corseted gown. Reese Witherspoon, Kate Winslet and Kerry Washington also opted for structured looks by Oscar de la Renta, Ralph Lauren and Atelier Versace, respectively.

Working the same Marilyn Monroe vibe she favored at the Golden Globes, Lady Gaga was perhaps on the cusp of overexposure (on the top, anyway) in a white off-the-shoulder pantsuit-ballskirt combo by Brandon Maxwell (she gave her neckline a good tug up before stepping in front of cameras).

A highly physical actor whose ballet training has been evident in her confident red carpet carriage all season, only Alicia Vikander seemed truly at ease and tickled to be wearing her “dusty” yellow Louis Vuitton gown — even kicking her heels up and twirling around gracefully, to the chagrin of photographers. “Stand still! Stop moving!” they shouted. “You scared them!” she scolded the lensmen as her parents quickly retreated after posing for a few seconds with their daughter.

While the gents get off easy with their tuxedos, even some of the men’s looks weren’t tailored for comfort. “I’m really sweaty,” admitted Eddie Redmayne, wearing another of his velvet tuxedos, this one by Alexander McQueen. “Last year it rained, so we weren’t hot. We’re in double velvet tonight, so it’s going to get pretty sweaty,” he said, referring to pregnant wife Hannah Bagshawe in a coordinating black velvet halter-neck gown. “Ah, well, cheers!