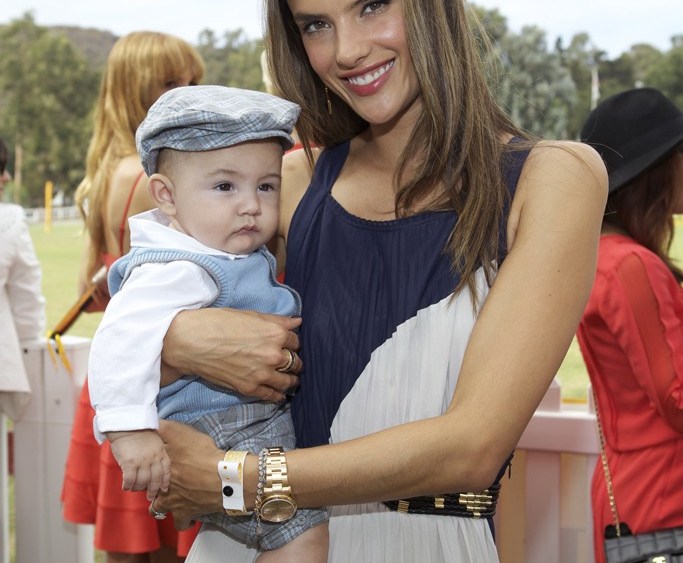 Pint-sized play-date partners abounded at the third annual Veuve Clicquot Polo Classic at Will Rogers State Historic Park in Pacific Palisades, Calif., on Saturday afternoon. Guests including Rebecca Romijn and Jerry O’Connell, Alessandra Ambrosio and Jamie Mazur, Selma Blair and Jason Bleick and cohosts Rachel Zoe and Rodger Berman arrived with their offspring in tow to the sporting event, which was inspired by the Epic Polo Match of 1922 in New Delhi.

“She’s a big fan. He has known her since she was born,” the model explained as her daughter excitedly recounted the moment in Portuguese as she clutched her gift.

Nacho Figueras, who cohosted with wife Delfina Blaquier, was named the Most Valuable Player as his Black Watch team edged rival Nespresso by a mere point. After the match, Figueras walked his horse over to Zoe and Berman’s 18-month-old son Skyler, whom he plans to take riding for the first time next summer.

“Oh look, there’s Uncle Nacho!” exclaimed Zoe, who tipped her hat — literally — to the Indian theme by pairing a vintage Dior turban with pieces from her fall collection.

Despite her British roots, Ashley Madekwe revealed that she had only attended a faux polo match thanks to a bit of small-screen magic on “Revenge.”

“He’ll probably kill me for telling you, but Josh [Bowman] was on the back of a truck, not a horse,” the actress, who donned sky-high Hervé Léger sandals, divulged.

Ali Larter performed the ceremonial bowl-in at the game, which raised funds to maintain Los Angeles’ last remaining polo field, where Clark Gable, Walt Disney and Douglas Fairbanks once played. Vintage rosé Champagne flowed for guests, including Mandy Moore, Donovan Leitch, Lauren Conrad and Rose McGowan, who nibbled on Indian-inspired fare like curried salmon and samosas, and protected themselves from the sun with parasols and fans.

“I love the horses, and when I was a teenager I loved the polo players,” she said, joking that she cured herself of that “by dating a few.”

That left more for Ashley Greene, who, in a bit of an understatement, admitted, “They’re not bad to look at” before promising to “investigate.”