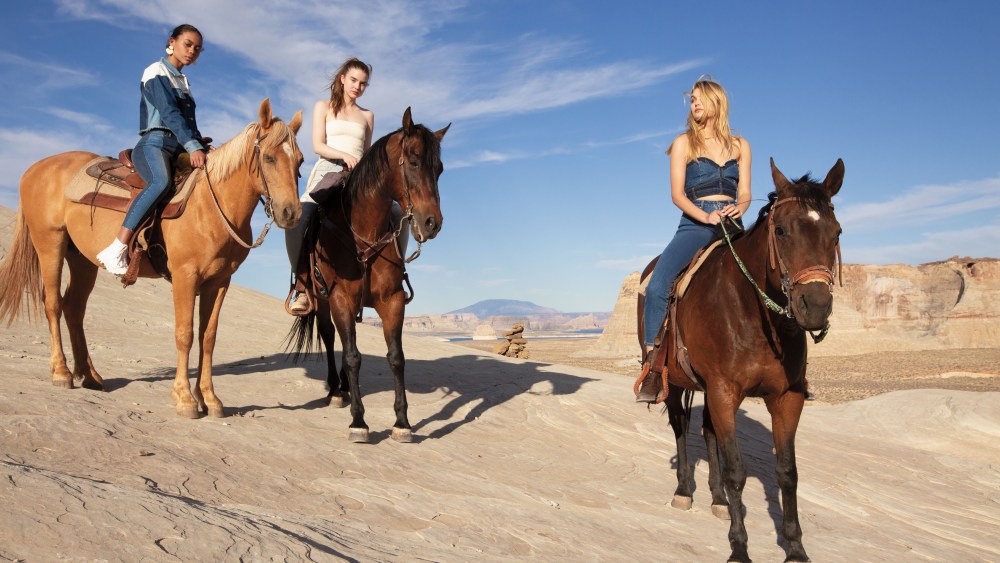 Amangiri is hard to access. The Utah luxury resort — where Kim Kardashian West spent her birthday and Emily Ratajkowski enjoyed her honeymoon — requires multiple hours in the car after flying in from either Arizona or Vegas. Thus, Amangiri, for teen retailer PacSun, was the place to be to shoot its fall campaign.

The Anaheim, Calif.-based retailer with 442 stores is moving forward with an evolving influencer marketing program in a bid to continue to keep its pulse on the ever-fickle teen consumer. In early June it brought a group of influencers to stay at the resort for horseback riding, dinners, UTV rides and, yes, content creation for its fall #FindYour campaign focused on playing up PacSun-branded denim via its digital and in-store channels. The campaign rolls out July 19.

The company for its fall denim offering experimented with patchwork and exposed zippers on the women’s side with a range retailing from $49.95 to $69.95. On the men’s side, priced from $49.95 to $64.95, there are slimmer silhouettes and elements such as embroidery and vintage washes.

“It’s [influencer marketing] not some revolutionary new idea, but it’s definitely a recognition across a handful of things,” said newly appointed president Alfred Chang, who was the company’s former chief brand officer. “Number one, as a retailer with both an e-commerce business and a store business, we need to do campaigns. We spend a lot of effort creating imagery and content for customers. At the same time, our target consumers are the highest users of digital content today. Everybody can talk about the importance of influencers, but the importance of influencers for us is such a sharp point. The use of influencers isn’t just a nice-to-have; it’s a must.”

The upcoming campaign is another signpost for the Pacific Sunwear of California LLC business, which earlier this month was joined with outdoor brand Eddie Bauer LLC under a single operating entity, the newly established PSEB Group. The two businesses are owned by private equity firm Golden Gate Capital.

The announcement at the time of the new operating company’s establishment said the combined entity is more than 700 stores with sales projected to be $1.5 billion this year. Comparable sales for PacSun were up 5 percent last year and are ahead 8 percent year-to-date.

The upcoming fall campaign represents a new level of experience, one PacSun aims to integrate more of in future marketing strategies. It’s a step up from the retailer’s partnerships with influencers to this point, which was typical of most others used throughout the industry: an outreach program in which product is seeded.

“I’m not saying that’s not still an important part of the business today, but that in comparison to the assets, content and story [generated from the Amangiri trip] and how much more dimensional that is, it’s a far comparison,” Chang said. “To us, this is the evolution. Everybody can say influencers are important, but this is a recognition of how to be more effective with consumers. This is how we want to show up as PacSun.”

While the campaign’s full rollout begins in July, during the trip a small trickle of content was released. So as someone was horseback-riding or driving around on a UTV, the product they wore was live on the site and shoppable.

“It gave that immediate gratification for the consumer that was along on that journey with us as they watched Instagram Stories or were seeing our social feed through the influencers themselves who were posting their own experiences as they were having fun and interacting and engaging with the brand,” said Brie Olson, executive vice president and chief merchandising officer.

The brand has had its fair share of working with big-name influencers, Olson pointed out. She pointed to Jerry Lorenzo of Fear of God, Kendall and Kylie Jenner and Lottie Moss as examples. However, the greatest engagement potential moving forward is with the microfluencers, Olson said.

The retailer has continued to refine how it speaks to its consumer, including the pivoting of the assortment several years ago to stay in step with shifting tastes by diversifying beyond the stable of action sports brands — albeit still important to sales, Chang said — and into more fashion-forward looks, particularly on the women’s side. The company in 2012 released a “Golden State of Mind” campaign that’s still referenced today. Though even that messaging has been refined since its inception.

“The ‘Golden State of Mind’ message was a fine initial step, but that message probably did not evolve enough to speak to our customer,” Chang said. “‘Golden State of Mind’ was still trying to sell a California lifestyle and I think today our customer and the teen consumer and the lifestyle is much more robust and dynamic than that. That’s why these experiences we’re putting together and when we talk about influencers, it’s about that energy and the customer that’s a bit more informed.”

After all, the statement largely brought to mind the idea of selling the California or Los Angeles lifestyle, when PacSun’s positioning is more about curating a product assortment through the lens of its L.A. roots, the executive went on to say. It’s a finer point and an acknowledgement of consumers’ diverse tastes rather than a single label to define a shopper.

“We used to sit — and not just at this company but other companies — would sit and say ‘OK, well who are your six consumer types? How are you going to define each one?’ And then we say ‘We’re going after these three. Johnny does this and Mary does this’ and we define them,” he said. “When you look back, that is just such an incorrect way of defining the consumer back then and especially today.”

The company plans to continue the momentum it hopes will be jump-started with the upcoming campaign.

“We’ve already got our eye on how we will evolve this moving forward,” Olson said. “It’s very exciting to be able to see the progression of how we view influencers and what we think a successful roadmap looks like.”