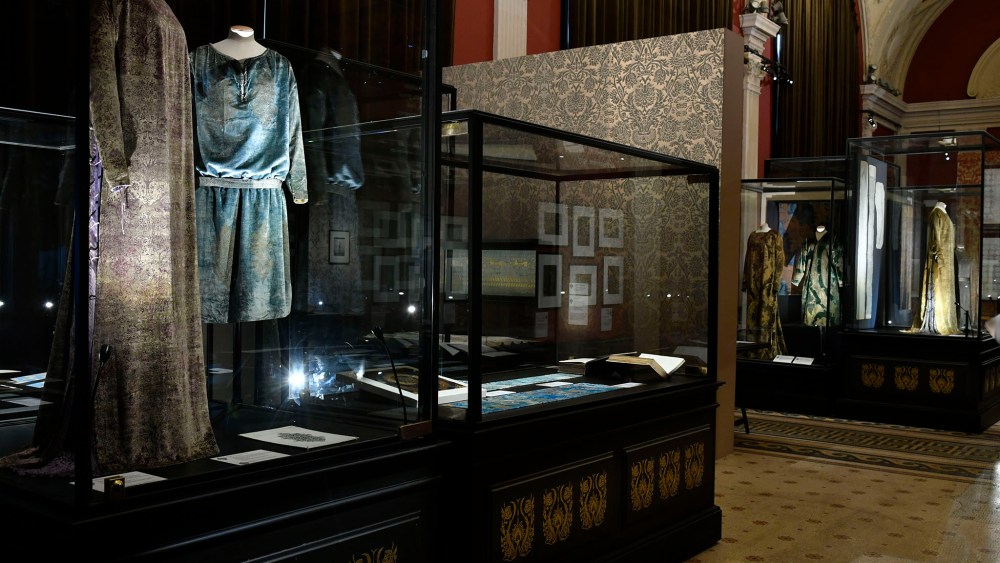 PARIS — The Palais Galliera is capping its Spanish season with an exhibition on Mariano Fortuny, the first of its kind to be staged in the French capital.

“Fortuny, a Spaniard in Venice,” which opened on Thursday, features more than 100 pieces from the French fashion museum’s collection, the Museo Fortuny in Venice, and the Museo del Traje, Madrid’s fashion museum.

Among the star exhibits are several examples of his Delphos gown, which has been worn by famous women ranging from Isadora Duncan and Lauren Bacall to Natalia Vodianova and Lauren Hutton. Designed in 1909, it is made from fine pleated silk taffeta and covered in albumin, which gives it its distinctive gloss.

“Fortuny’s biggest influence is that his pieces are still worn today,” said Sophie Grossiord, head curator at the Palais Galliera.

But the show also gives a deeper insight into Fortuny, the son of a famous Spanish artist, who started out as a painter himself and also had a prolific career in stage design and stage lighting, in addition being active in photography and engraving. Born in Granada in 1871, he moved to Venice in 1888.

Between 1903 and 1933, he filed no less than 20 patents in Paris. Among his inventions was a cyclorama dome that was used for a staging of Richard Wagner’s “Parsifal” at La Scala in 1922.

Fortuny’s fascination with light and color is reflected in his elaborate fabrics, which drew their inspiration from sources as diverse as Islamic art and the Renaissance. He printed velvet with sparkling copper oxides, bronze and aluminum, and dyed silk imported from Japan with natural pigments.

“You cannot get an understanding of Mariano Fortuny if you don’t look at light,” Grossiord said. “He produced similar designs through the 1910s, 1920s and 1930s. He was not aware of trends. He was completely outside of fashion – he was an artist, a painter.”

Fortuny’s first experiments with fabric coincided with a resurgence of interest in Greek antiquity. He made his debut in 1907 with the Knossos scarf, whose block-printed floral and marine motifs were inspired by some ancient vase fragments found in Greece by English archeologist Sir Arthur John Evans.

In 1908, Fortuny registered a drawing of the famous labyrinth at Knossos as his trademark. His scarf was rapidly adopted by leading socialites, including Denise Poiret — the wife of couturier Paul Poiret — who wore one as a tunic to the Bacchus-themed fancy dress party her husband threw in 1912.

Fortuny designed the Delphos dress with his wife Henriette Nigrin, who is credited with inventing its signature permanent pleats. Although a patent was filed in 1909, the technical details remain a mystery guarded by the Fortuny house, which exists today but now specializes in soft furnishings.

The dress, which was trimmed with glass beads, was twisted up and sold in a small cardboard box. It represented a revolution at a time when women still wore corsets, appealing to a cosmopolitan, privileged clientele.

“He wanted to liberate the body,” said Grossiord. “In the beginning, these dresses were bought by emancipated women who were very avant-garde and who wore them at home. At that time, it was not something you would wear outside, but in the Twenties, people started going out in Fortuny coats and other pieces.”

A room is dedicated to the house’s famous customers, including Marchesa Luisa Casati, Anna Pavlova and Jeanne Lanvin. Countess Greffulhe was another fan, and writer Marcel Proust — who based one of his characters on the French socialite — namechecks Fortuny in “Remembrance of Things Past.”

The main hall of the exhibition is filled with examples of delicate silk tunics, elaborate velvet dresses and coats, ornate capes and abayas. Preparatory sketches, wood blocks for printing, and stamping tools illustrate the variety of techniques Fortuny used to create his patterns.

The show also features kimonos by Babani and others whose work reflected similar inspirations. These include a raspberry silk velvet medieval-inspired gown by Maria Monaci Gallenga, and pieces by little-known designer Suzanne Bertillon.

The last room illustrates how Fortuny continues to resonate with designers today, with a Pleats Please design by Issey Miyake and the Isadorable dress designed by Maria Grazia Chiuri and Pierpaolo Piccioli for Valentino’s spring 2016 haute couture show.

Between them sits a remastered Delphos gown, created for the occasion by the house of Fortuny, which said on its web site it had resurrected the pleating process “after many years and countless hours of research and development.”

Set to run until Jan. 7, 2018, the Fortuny exhibition is the third in a trilogy which opened with “Balenciaga: Working in Black” at the Musée Bourdelle, and was followed by “Clothes in Spanish Tones” at the Maison de Victor Hugo.