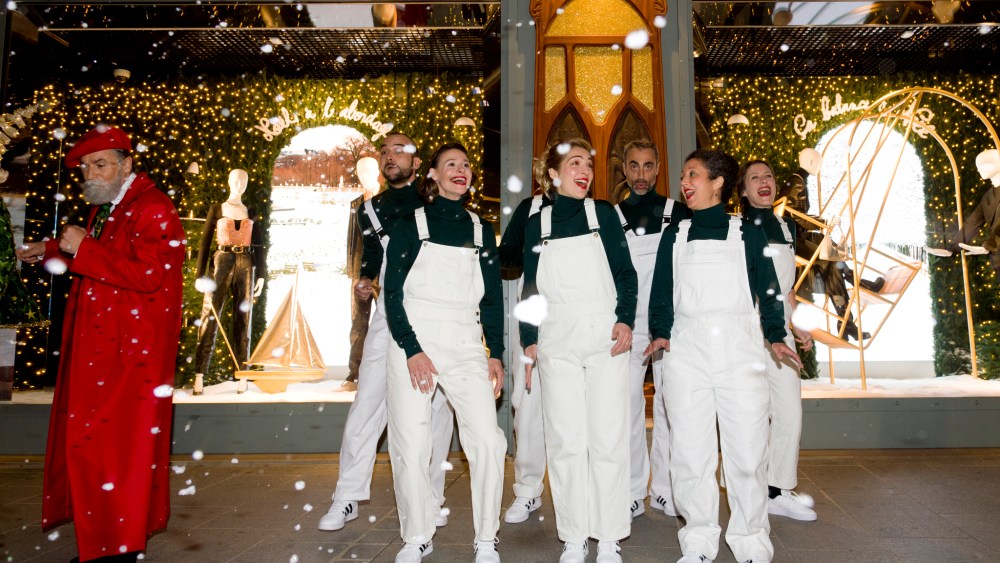 PARIS — The latest pandemic-related news may bring shivers down retailers’ spines, but for Paris’ department stores, being outdoors is a highlight of the season.

Mannequins dressed in festive outfits enjoyed a swing ride or played with the boats on the basins of the Tuileries garden. Fairy lights dressed the foliage of topiary trees and manicured hedges. Christmas trees became impeccably coiffed dancers and a choir in white overalls belted renditions of carols with witty wordplay.

Even Santa was given a “humorously elegant twist, as is the French way,” as de Boysson put it, appearing as a dandy in a red tailcoat and matching beret.

As incentive to visit regularly throughout December, the central atrium was turned into a store-sized Advent calendar. Every day until Christmas Eve, a raffle will take place, with the prize revealed at 12:24 p.m. by the store’s liveried groom.

A few blocks away, BHV is taking its visitors to the Swiss mountains for this holiday season, themed “Noël au Sommet,” (or “Peak Christmas”).

Benoît Le Mauff, director of visual identity and merchandising at Le BHV Marais, said Switzerland embodied the aspirations of its urban clientele for “ultra-preserved nature and a very white Christmas.”

“We always try to anchor our themes in daily things for our customers, who are 85 percent Parisian, and the closest destination is Switzerland, which is recognized for its efforts toward preservation of natural spaces,” he added.

Cue window displays featuring Alpine landscapes silhouetted in layers of paper, with plush-toy versions of the local wildlife livening up the pristine scenes with their antics. The Matternhorn took pride of place on the facade facing Paris City Hall.

At the inauguration, two children dressed in traditional costumes kicked off festivities that included flag-twirling and alphorn performances, in the presence of Switzerland’s ambassador to France, Roberto Balzaretti.

In keeping with the idea of protecting nature, all materials used were sustainably sourced, from the paper to the upcycled textiles used for the stuffed animals. After the holidays, they will be collected by “Chutes Libres,” an association that provides resources to young creatives free of charge.

On Boulevard Haussmann, Santa’s closest collaborators embarked on epic journeys of their own.

At the Printemps, when his North Pole workshop ground to an unexpected halt — supply chain issues, anyone? — Santa sent his elves out to find a new location to resume production. Their choice? The department store, where they soon set up shop in six of its windows thanks to 121 animated puppets and the work of French artist Aurélia Fronty.

Titled “The Amazing Elf Workshop,” the displays follow the elves as they set up shop, opening an alchemist’s lab featuring Chanel No. 5 perfume, a fashion atelier with Prada, which spills over into the atrium between the central escalators, and a festive kitchen.

While the adventure for this retail emporium stops with gifts ready to ship out, its neighbor Galeries Lafayette Haussmann imagined what happened next.

A cast of dolls, teddy bears and robots came alive in the windows after singer Loane and actors Omar Sy and Leila Bekhti pressed the button at the official unveiling.

The toys’ joy ride in Santa’s sled took them from the elves’ workshop to a concert and some fashionable destinations. One of these: outer space, thanks to Bottega Veneta’s festive space shuttle.

And after this colorful journey, they found an inflatable Santa under the department store’s renovated cupola.

On the Left Bank, Le Bon Marché — and its Grande Epicerie food halls — opted for a traditional Christmas theme with candy canes and giant puppets shaped like gingerbread people.

Leading the march is Aristide, who owes his name to the department store’s founder Aristide Boucicaut. The troupe comes alive in the four main windows on Rue de Sèvres doing a hip-hop routine, leading the cheer with pom-poms in hands or performing a cabaret number.

In other windows and in-store, the icing white, chocolate brown and peppermint red color scheme continues, as a backdrop for gift selections, with fairy lights to add an extra dose of festive sparkle.