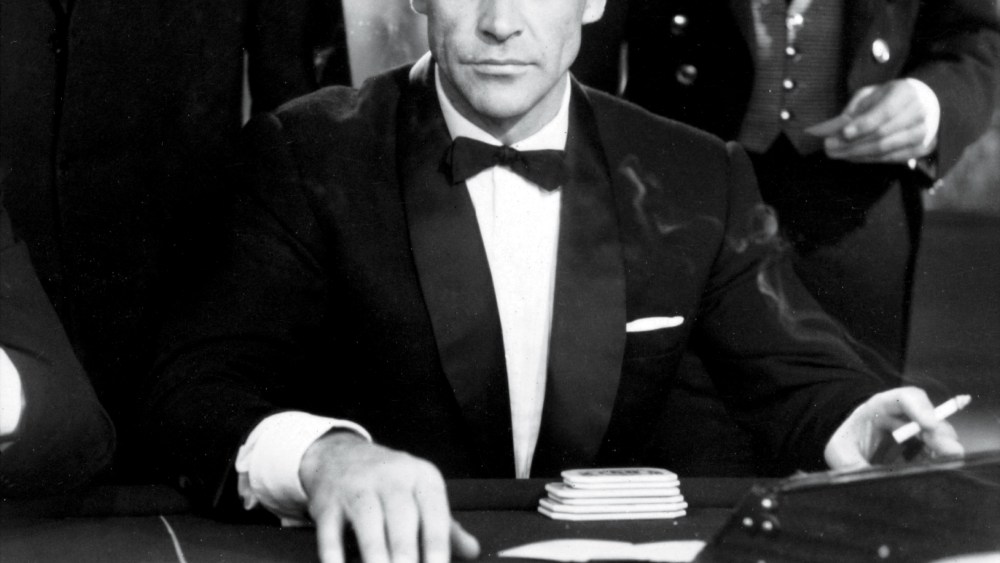 At La Villette in Paris, that is, where “Designing 007: Fifty Years of Bond Style” opens on April 16, with more than 400 costumes, cars, sketches and famous gadgets tracing what has become known as “the Bond look.”

It’s not a coincidence that the first glimpse of the character in the opening scene of 1962’s “Dr. No,” the first movie of the Bond series, is the turned-back silk cuff of Sean Connery’s impeccably cut tuxedo jacket, as he smokes and deals cards at the casino table.

But when Connery, a former bodybuilder, was cast, producer Albert Broccoli and writer Ian Fleming didn’t think he was the right man for the job, according to fashion historian Bronwyn Cosgrave, who co-curated the show with Academy Award-winning costume designer Lindy Hemming. “They groomed Connery to play Bond,” Cosgrave said, suggesting that it was part of the spy’s job description all along to be incredulously good-looking and have an irreproachable sense of style.

Fleming sent the actor to his Savile Row tailor, Anthony Sinclair, who already cut suits for Terence Young, the series’ director, while Broccoli encouraged Connery to sleep in the piece, which he did.

To say it worked would be an understatement. More than 50 years into the game, the Scotsman still outplays his fellow 007s in terms of allure and popularity.

And, “the evening jacket remains the touch-stone of the Bond look,” said Cosgrave.

By the mid-Nineties, when Pierce Brosnan entered the scene in “Golden Eye,” the movies got more action-packed and the costume budgets bigger. In a video clip, Hemming explains the dilemma: “One suit translates into 10 suits and sometimes 25, and honestly there was no Savile Row body that could undertake that in the time that you get to produce the costumes.” So she turned to Brioni, which was up for the task.

Hemming said she wanted Brosnan “to look like he could go to Europe and spy industrially” instead of “an English gentleman or a military person.”

By the time Daniel Craig took over the franchise, the tone had changed again. “I think that Daniel Craig is sort of a mean Bond, and so the tailoring is pulling him in.” A task that proved right for designer Tom Ford.

The exhibition also features Roger Moore’s suave, ivory dinner jacket from “Octopussy”; Craig’s tight blue swim trunks from “Casino Royale,” Omega watches and the Aston Martin that 007 likes to drive, crash, eject adversaries from and use as a lethal weapon. Both models — the DB5 (driven by Connery in “Goldfinger”) and the DB10 — made the cut.

Cosgrave said part of the success of the Bond series is that it’s “very fashion-forward.”

“The franchise has always been one step ahead of contemporary. It was not about the now, but about the next,” she said, adding, “this starts with the production design of Ken Adam.”

Adam, who died in March, is shown in a video telling how he pimped Bond’s ride with special effects expert John Stears, who created Luke Skywalker’s landspeeder and light saber.

Paul McCartney and Mick Jagger are just two who caught the fever and snapped up the cars. But Cosgrave notes it’s not just what Bond drives, but what he wears on screen that has also a profound impact offscreen. When the franchise approached Sunspel to re-create the pale blue shorts worn by Sean Connery in “Thunderball” in 1965, they became “such a success that later that year we launched our first line of swimwear,” the brand notes on its Web site.

“I think for one it’s the actor — it’s always a very charismatic, handsome man,” said Cosgrave. “Then there’s the element of secrecy surrounding every Bond film: no details are let out until the premiere, which is very old school.”

Divided into rooms that include Q’s lab and M’s office at MI-6, and “the casino,” the exhibition also sheds light on the eclectic cast of 007’s women co-stars, whose seductive evening gowns and beachwear are among the items on display.

The show features a black satin jumpsuit Givenchy created for Lois Chiles as Dr. Holly Goodhead in “Moonraker,” alongside a hooded dress made by Azzedine Alaïa for his friend Grace Jones, aka Mayday, in “A View to a Kill.”

While more than 90 percent of the costumes are originals made by Prada, Versace and Roberto Cavalli, among others, some were specifically re-created for the exhibition. These include the bikini worn by Honey Ryder (Ursula Andress) in “Dr. No” and Pussy Galore’s (Honor Blackman) gold waistcoat in “Goldfinger.”

The Paris show — slated to run through Sept. 4 — also sports items never seen before in public including the couture corset that helped Monica Bellucci get under Craig’s skin in “Spectre,” cut for her by Parisian corsetry house Cadolle.