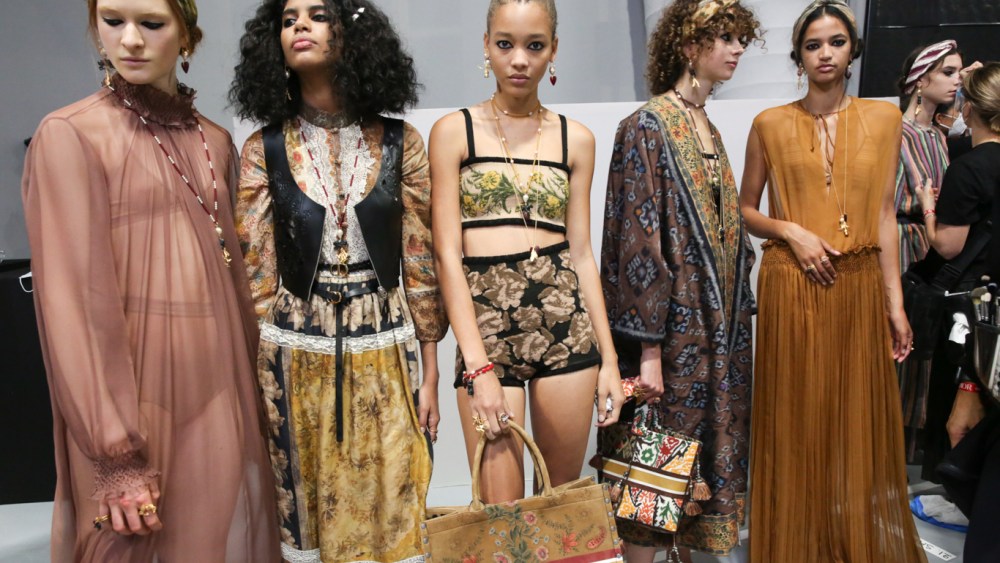 PARIS — The runway show is not going anywhere, judging from the feedback on the most recent Paris Fashion Week.

“While social media interest in Paris Fashion Week significantly decreased this year compared to last, the designers who did have the most success on social media were those who scaled back their presentation the least,” noted Tracy David, chief marketing officer at data and analytics firm ListenFirst.

“With the pandemic with us for the foreseeable future, designers that are able to find safe and creative ways to return spectacle to the runway will generate the most social media interest around upcoming fashion events,” she added.

Along with growing experience of trying new formats came some insights into best practices. Among the key takeaways: videos should last at least five minutes, and influencers can participate without being present.

Paris Fashion Week generated the highest earned media value of the four spring 2021 fashion weeks, according to media monitoring and analysis firm DMR Group. It had the most visibility on the web, and also dominated on social media.

The digital hub for PFW drew a total of 230,000 visitors, up from 202,000 for the combined haute couture and men’s fashion weeks in July, and tallied 606,000 page views, up from 490,000 in July, according to preliminary figures provided by the Fédération de la Haute Couture et de la Mode.

The federation, French fashion’s governing body, worked with its partner Launchmetrics, the data research and insights company, to improve the navigability of the site, clarify the calendar page, and make the magazine section more fluid.

Pascal Morand, executive president of the federation, said the platform had created a level playing field for participating brands, noting the effectiveness of the system of amplification and partnerships that was put in place.

“What we saw is that even if some big brands overperformed, all brands were satisfied with the result,” he said. “This hybrid system amplified the resonance for every participant, including less visible brands. There is a principle of fairness in the Paris calendar.”

Dior was once again the top-ranking brand in terms of Media Impact Value, as tracked by Launchmetrics. Next in the ranking were Louis Vuitton and Chanel. The three brands were among the 18 houses that held runway shows, albeit with drastically reduced guest lists.

“Paris and Milan are really the most protected when it comes to what a fashion week should look like, and the sacredness of these kind of historic events in our industry,” said Alison Bringé, chief marketing officer of Launchmetrics.

“And what was so incredible was that, when our industry was pushed into this kind of corner on how we would manage in the wake of this pandemic, the creativity of the industry really showed,” she added, noting there was an acceleration in digital transformation in the space of just a few months.

“Some of our biggest challenges were answered through a pandemic, and this is just the beginning of what brands can start to create,” Bringé said.

She noted that luxury houses have become better at leveraging their own social media platforms, with the most successful opting for a selective approach, rather than flooding Instagram with posts and show images.

Dior’s most highly rated post featured Jisoo, a member of the South Korean girl group Blackpink, and generated $614,000 in MIV, more than twice the amount of the brand’s most successful post from the fall 2020 show. Overall, average MIV for Dior’s posts was up 33 percent.

ListenFirst found that Chanel and Louis Vuitton topped the chart for social engagement, while Balenciaga rounded out the top three with its fashion film. The others, in descending order, were Balmain, Givenchy, Loewe, Hermès, Kenzo, Chloé and Miu Miu.

Chanel was one of several brands that partnered with social media stars to create videos on YouTube that showed them getting glammed up to take in the show remotely. Its video with Dixie D’Amelio, featuring a special appearance by Camila Coelho, has garnered almost 3.5 million views.

Derek Blasberg, head of fashion and beauty at YouTube, which is also a partner of the French fashion federation, said it doesn’t release viewing figures immediately after the shows because they have a long shelf life.

“A lot of other platforms focus on immediate viewership, and YouTube has a much longer tail. We see more than half of viewership for fashion shows happening at least a month after the shows are uploaded. So we don’t really look even at our numbers, we do our audits later in the season,” he said.

He noted, for example, that Gucci garnered a few hundred thousand views for its fall 2020 shows in the first week after it aired in February. In the six months since, it has racked up 3.6 million views.

Between New York, London, Milan and Paris, YouTube hosted 209 shows this season, and 108 of those brands were posting for the first time on the platform. As a result, it has compiled some tips for success.

Brands can boost engagement by flagging their shows using the YouTube Premieres feature, and interacting with their audience in comments and live chat. Titles should be optimized for search engines, and videos should be at least five minutes long.

The most-viewed brands created three to five pieces of additional content, such as behind-the-scenes footage, around their shows. However, Blasberg acknowledged it was harder for brands to amplify their shows with most of the usual social media stars and influencers grounded.

“But I was happy to see that some brands and some creators were managing to do that from home,” he said, noting that brands relinquished more control than they would have in the past. “It’s definitely easier now. I think brands have more trust in what creators are doing. Like, ‘You know your audience better than we do.’”

Globally, he believes the subdued season has opened the playing field not just for new influencers, but also models and designers who would not otherwise have enjoyed the same spotlight. Blasberg noted that the YouTube fashion vertical listed everyone on the Paris calendar in running order.

“So suddenly, Dior was next to a new brand that probably would not have had the same eye share as Dior, but as we consume all these shows digitally and with limited resources around models and creators, I definitely think that we all saw some things that maybe we wouldn’t have noticed in previous seasons, including influencers, including models, and including the designers themselves,” he said.