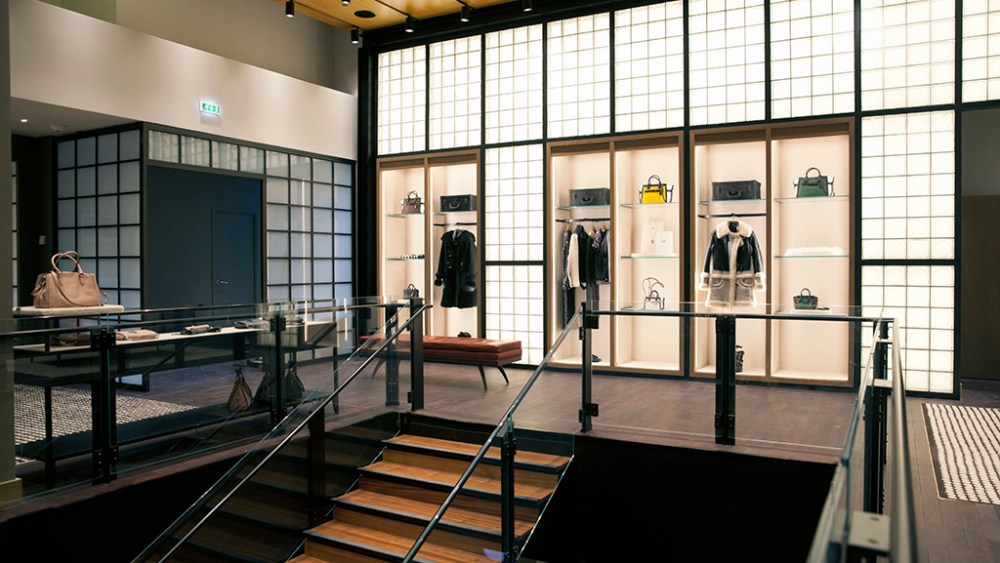 Replacing a former Hugo Boss boutique, the new venue is the American label’s third European retail outpost, following London and Madrid, and the first to feature an updated luxury concept as Coach looks to expand its reach beyond its core markets at home and in Asia, as well as to become a lifestyle brand.

“I think this is a pivotal moment for our company,” Nigel Darwin, president of Coach Europe, told WWD ahead of the store’s soft opening on Saturday. “Paris defines the next chapter of development across the region. The city is important on a number of levels, not only in terms of brand positioning in France but worldwide,” he noted, highlighting the French capital’s strong tourist traffic as a key driver.

Darwin said he was eyeing Milan and Munich next, hoping to find good retail spots there “sooner rather than later.”

“Europe is trading extremely well. We see double-digit growth in the region, as the company is heading towards a 0.5-billion-dollar business, which we said was our short- to medium-term objective here,” the executive explained, citing a combination of direct business through flagships, wholesale growth as well as online as the strategy going forward.

The Paris unit was conceived by the label’s creative director Stuart Vevers, who joined the house from LVMH Moët Hennessy Louis Vuitton’s Loewe brand in 2013, in partnership with interior designer William Sofield, putting the focus on the firm’s heritage and leather expertise. A craftsmanship bar and craftsmanship vitrine are slated to arrive later this month and then spread out to future venues across Europe.

“The bar will provide various leather services such as leather care, repair, monogramming and personalization,” said Darwin, while the vitrine will display vintage styles showcasing the company’s heritage from the time it was founded in 1941 as a family-run workshop in New York City through today.

“What is American luxury?” asked Vevers, who has been busy developing Coach’s product range beyond accessories. “That is what we wanted to celebrate with this store.”

The designer singled out the firm’s handcrafted nature and its New York cool attitude as elements unique in the affordable luxury segment, where Coach’s price point ranges between 350 euros, or $392 at current exchange, for a small bag to 3,000 euros, or $3,362, for a sheepskin biker coat.

The shop’s interior sports a downtown loft atmosphere, decorated with bespoke furniture, including a pair of shearling chairs — a wink to the house’s fetish fabric.

Four limited-edition styles have been designed exclusively for the Paris unit: a cross-body bag and patchwork tote for women next to a camouflage-printed backpack and also a tote for men, which complement the store’s full range of ready-to-wear for men and women, along with shoes, eyewear, jewelry and watches.

New versions of the Duffle and Saddle bags inspired by the baseball glove and made of genuine glove-tanned leather, are slated to debut at the Paris store in November in tandem with Coach’s 75th birthday.

Vevers said he is eager to push the Coach story further. “The idea is to create unique, one-off objects, outside of the world of bags and leather goods,” he said.

Darwin acknowledged that the Parisian customer is “used to an extremely rich environment of traditional brands with a great deal of history, and [she] has an understating of both luxury and fashion.” Consequently, the goal would be “to show Coach’s ability to deliver on quality, and raise awareness, while bringing in something new.”

“In the U.S., the brand is extremely well established. In Europe, we are at a different stage of our journey, which started only four years ago,” Darwin noted.

Coach currently has more than 450 points of sale in North America, about 500 directly operated locations in Asia, and more than 30 in Europe. The brand also operates e-commerce in the U.S., in Canada, Japan, China and the U.K., which launched last week.

Coach has scheduled an event to officially inaugurate the new Paris unit on Nov. 19.