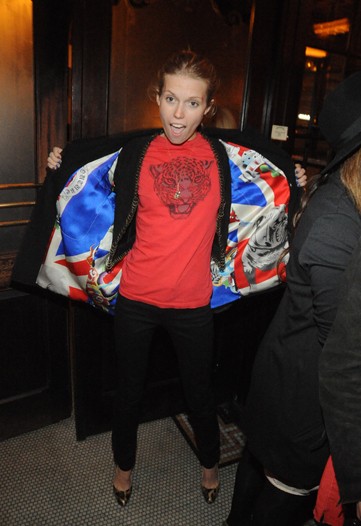 The arrival of Topshop/Topman this week has sent New Yorkers into something of a frenzy. Fashion followers are desperate to get their hands on the British label’s cheap and cheeky product while partygoers are anxiety ridden over which of the three opening parties they’re invited to. (Yes, there are three. Apparently just one — or none — seemed too 2009.)

So it was surprising to approach the new Broadway store Tuesday night for the first affair and see none of the usual store opening mayhem surrounding the entrance. And inside, there weren’t more than a dozen shoppers on each of the four floors. Where was the frenzy?

Sir Philip Green, Topshop’s top man, said the calm was all carefully calculated. “With a small group it’s easier to talk to people and understand what they like,” he said. “It would be wrong if we had 1000 people here and didn’t know 900.”

Fortunately the after-dinner at Balthazar was much more happening, as editors and celebrities gushed about their obsession over Champagne and French martinis.

“Every trip to London revolves around a trip to Topshop,” said Michelle Monaghan.

“I was shooting a movie in London for three months, and I would go to Topshop once a week,” said Emma Roberts. “When I came back to LA, everyone was really jealous.”

Indeed, some of the Brits in attendance were a bit deflated over the idea that their beloved brand is no longer exclusively theirs. “It’s usually my first port of call when I go home,” said London transplant Emily Mortimer.

Things started heating up when Mark Ronson and the Dap Kings took the stage, accompanying acts including Daniel Merriweather, Santigold and Amazing Baby.

But it was Jimmy Fallon, who arrived to the party straight from taping his talk show, who really took the house down with his melodic version of Sting’s “Englishman in New York.”

During the song’s musical interlude, he started in on the chorus of Beyonce’s “Single Ladies,” probably not knowing Jay-Z had just arrived. The rapper was there, without his wife, as a favor to Ronson. “Mark told me it would be super cool, so I had to check it out,” he said.