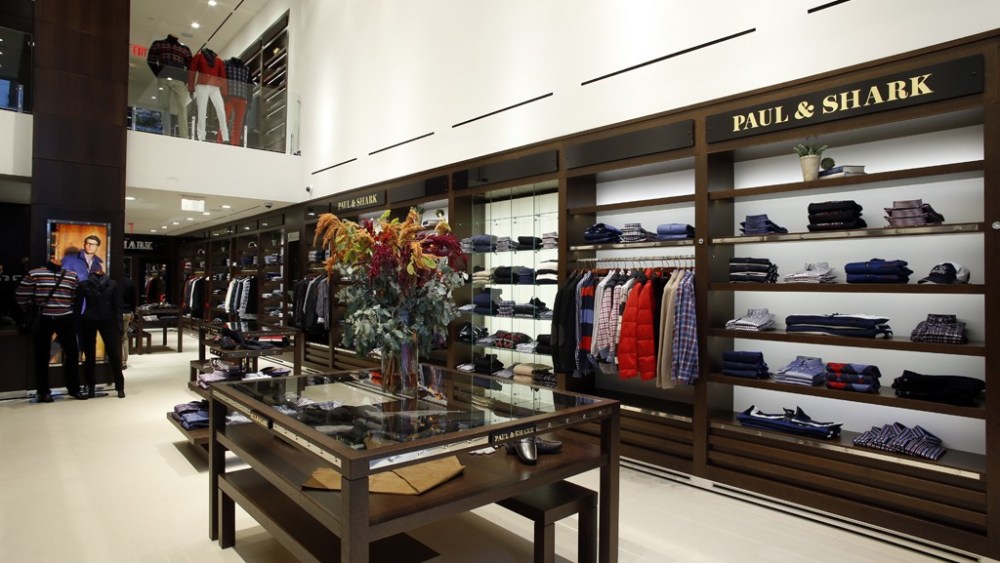 Paul & Shark has big plans for the U.S. market and has opened a new flagship in New York City to jump-start the initiative.

The privately held Italian brand has expanded its presence by taking a 2,200-square-foot two-level spot across the street from Barneys New York on Madison Avenue and 61st Street. For the past 12 years, the brand had operated out of a 1,600-square-foot space five blocks north.

“It wasn’t easy to find good space on Madison Avenue,” said Rachelle Giroux, president of Paul & Shark USA. “But this is a higher traffic area and we anticipate being more visible here.” The store is located next to Michael Kors, which creates strong “synergies and adjacencies,” she added.

The store not only allows the brand to expand its men’s sportswear offering, but the company’s women’s collection now has its own home on the second floor, accessible from a glass-topped staircase. “We now have a designated women’s area,” she said, noting that women’s merchandise was housed in the rear of the former store. “This is much more open and the ladies have their own private area upstairs.”

Women’s wear, which was launched in 2000, accounts for only 10 percent of the brand’s U.S. business, but Giroux is hoping to significantly increase that number with the new emphasis in New York. “Women’s was started just to complement the men’s wear, but now it’s a full collection,” she said.

The store also sells footwear and accessories. The rich wood furnishings throughout the store are the first of a new store design that Giroux said will be rolled out to other units around the world. Paul & Shark operates four stores in the States but more than 200 units internationally. The New York store is its largest in the U.S. The other units are in Short Hills, N.J., Aventura Mall in Florida and on Rodeo Drive in Los Angeles.

“Most of our customers are international,” Giroux said. In fact, 40 percent of the shoppers in New York are non-American, a number that jumps to 60 percent at the company’s Florida store. As a result, Paul & Shark’s planned retail expansion in the U.S. will be centered around locations that attract tourists.

“We’re currently negotiating in Las Vegas and Houston and we’re looking for more Florida stores,” she said. “San Francisco is also on the horizon when the right real estate presents itself.”

Giroux said that even during the downturn in the U.S., Paul & Shark has managed to perform well. “We’ve had strong and steady growth over the past three to five years,” she said, “because of the international customer.”

In addition to its own stores, Paul & Shark is carried at high-end specialty stores around the country, and starting next spring, it will also be carried at Nordstrom.

“Our strategy is steady growth,” Giroux said. She said sales are up 15 percent this year, on top of a 20 percent growth rate in 2011. The U.S. business is about $25 million — retail and wholesale — while the brand worldwide has a volume of 250 million euros, or $328 million at current exchange. “We have 62 stores in China and have been there since 1995,” she said.

Paul & Shark, which is a third-generation family-owned business, got its start as a yachting brand in Varese, Italy, in 1921. The brand has since expanded to a full lifestyle collection with a focus on fine knitwear and outerwear. Key pieces include the iconic sweater in a tin that retails for $325, a Typhoon technical jacket for $1,365, a leather-nylon-knit jacket for $1,235, and a cashmere gentleman’s coat for $2,125.