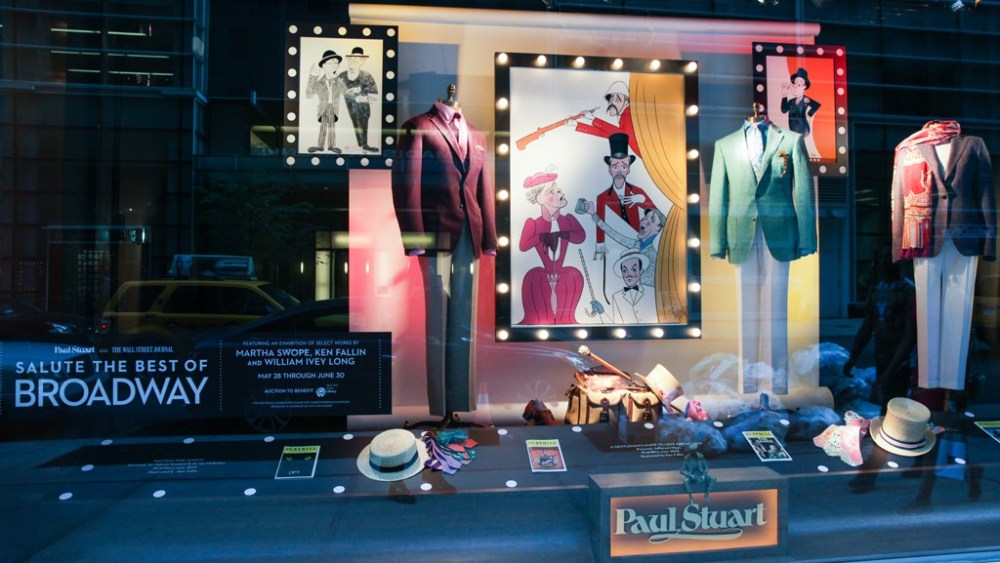 The Great White Way made its way to Paul Stuart Monday night for a retail celebration of Sunday’s upcoming Tony Awards.

The fete — cohosted by Scott Wittman, one half of the songwriting duo behind “Hairspray” and NBC’s “Smash,” and Patti LuPone — drew more than 600 guests that packed the flagship for a photo exhibition and auction to benefit the New York Public Library for the Performing Arts.

The windows were transformed into a tribute to iconic Broadway images taken from the archives of Martha Swope, the only photographer to have been awarded a Tony. Design sketches from six-time Tony Award-winner William Ivey Long also served as a focal point in many of the store’s windows and in installations throughout the store.

Items that were auctioned off included an autographed caricature of “Hairspray” by Ken Fallin, a signed photograph by two-time Tony and Grammy-winner LuPone in her role as Evita, an original drawing of Marissa Jaret Winokur and Harvey Fierstein in their roles in “Hairspray” and a guided tour of Long’s TriBeCa studio, among others.

The party, cohosted by The Wall Street Journal, concluded with an impromptu performance that was quintessentially Broadway, with LuPone lighting up the room with the classic, “I Wanna Be Around.”