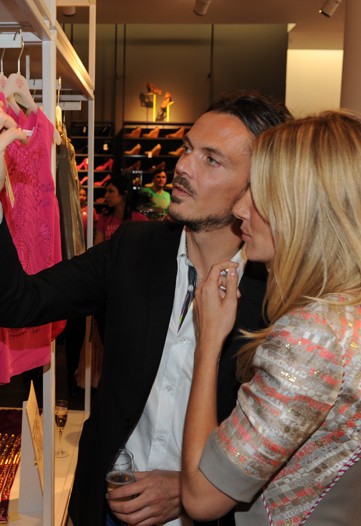 Thursday’s launch of Matthew Williamson for H&M had the hallmarks of the retailer’s previous designer collaborations, albeit toned down a notch. Yet if lines outside stores were slightly shorter and crowds a bit smaller and calmer, the demand exceeded supply in many cases.

This is the first time the retailer has introduced a designer collection in the spring, being launched in 200 stores. It’s also the first time H&M has done a two-part launch. As an encore, the chain on May 14 will introduce in all of its 1,700 stores a more populist line by Williamson, with 25 pieces for men and 30 for women. Besides apparel, the collection will include bikinis, sunglasses, flip-flops, beach bags, sarongs and towels.

“Within the first 11 minutes, half the garments were sold,” said Jennifer Uglialoro, an H&M spokeswoman, standing in the store at 640 Fifth Avenue at 51st Street. By 10 a.m., only a small area sparsely stocked with Williamson items remained. Half of the main floor, which had been devoted to Williamson’s designs, had been replaced with spring merchandise from the regular H&M collection, leaving no hint of the peacock feathers, sequins, ruffles and leather that had been on display.

“It was supposed to have a longer shelf life,” said Uglialoro. “It’s very hard to tell.”

She speculated the collection sold out so quickly because of its size, only 20 garments and a few accessories. The last collaboration, with Comme des Garçons, had 25 to 30 pieces of apparel plus accessories for women and the same amount for men.

Williamson’s collection was offered in eight H&M stores in the U.S., including three units in Manhattan and one store each in Los Angeles, San Francisco, Chicago, Boston and Atlanta.

“It wasn’t as ‘Wow,’ ” said an H&M employee at the Fifth Avenue and 51st Street store. “It wasn’t as intense. It definitely wasn’t as ‘wow’ as the fall designer launches. They’re usually more well-known. There weren’t the usual brawls.”

Thursday’s collection, which features cashmere, leather, sequins and embroidery, is priced from $49.90 for shorts to $349 for a ruffle gown. The long scarf and the outfit featured in the ad campaign — a long ruffle dress and short biker jacket — were the first items to sell out. The launch had been bolstered by print, billboard and online advertising campaigns.

The British designer, who shows his collections during New York Fashion Week, is not a household name and is less identifiable than other H&M collaborators such as Karl Lagerfeld, Stella McCartney and Roberto Cavalli. “Matthew Williamson is highly influential in the fashion industry, but to the consumer, he is less well-known,” said Uglialoro. “He’s on the same level of Victor & Rolf [whose designs for H&M launched in November 2006].”

Efforts to dress the Hollywood contingent may have raised awareness of Williamson’s style. Earlier this month, Katy Perry wore the peacock dress to an H&M party in New York, and Nicky Hilton wore the same number in Las Vegas, while Ginnifer Goodwin was spotted wearing the sequin painterly dress in L.A.

The campaign seemed to have helped on the West Coast, with about 80 people waiting in line to get into the Beverly Center H&M store before its 10 a.m. opening. Melinda Mendez drove to Los Angeles from Orange County with her boyfriend Sean and slept outside the center on Wednesday night. When the gates came up, the crowd rushed in, clearing the racks of the collection in minutes before beginning to barter and exchange the goods on the sales floor. “Our plan was just to grab everything we could and then trade it with other people until we got what we wanted,” said Mendez, a dental student, who spent $1,200 on two dresses, two necklaces, a clutch handbag, a leather jacket and two pink belts.

A new rule, instituted for the Comme des Garçons line, allows customers to buy only two of the same item. “We were finding that people were buying multiples either [to resell on] eBay or because they were unsure about a product,” said Uglialoro. “They would take half the rolling rack into the dressing room or cash register and didn’t give others a chance.” Uglialoro said the rule was adopted in the U.S. and a few other countries. However, on Thursday afternoon, there already were 80 Williamson pieces for sale on eBay, some at double the retail price.

The reaction to the collection was not similar worldwide, however. Outside H&M’s Boulevard Haussmann flagship in Paris, a small and orderly line had formed. The first customer arrived only an hour before the doors opened. Sabah Nassim, 28, who works at Gerard Darel, was surprised by the low turnout. “I walked straight in,” said Nassim, who spent more than 1,000 euros, or $1,296 at current exchange, on several pieces. “There was no line. People don’t have money anymore.”

The preopening crowd also was thin at the San Babila H&M unit in Milan. By 9:30 a.m., a group of about 10 Williamson fans had gathered in front of the store’s giant glass doors, waiting patiently. At 10 a.m., when the doors opened, some 40 people rushed into the store, nearly half the number for last fall’s Comme des Garçons introduction.

Half an hour before the 10 a.m. opening of the H&M branches on Ku’damm and the Alexa center near Alexanderplatz in Berlin, there were only about two dozen eager shoppers lined up. That was apparently enough to clear the racks and display tables of Williamson products by 10:15 a.m. — give or take a few pink belts and short printed silk jersey dresses. “It’s almost a record,” a Ku’damm salesman said of the pace.

A well-managed line outside London’s Regent Street H&M unit kept shoving to a minimum. Inside, the atmosphere was more buzzy than chaotic. “It’s so exciting, and the collection is very ‘this season,’ ” said a spokeswoman for Matthew Williamson, who was watching from the sidelines. A launch party on Wednesday evening that drew the likes of Sienna Miller and Mischa Barton may have heightened awareness and excitement. “I’ve bought four cardigans for my sister and me,” said Mary Carson, a fashion lecturer from Brighton, on England’s south coast. “I’m old enough to remember Kate Moss wearing [Williamson],” she said, referring to the designer’s first runway shows more than a decade ago.

In the Far East, no one was waiting outside H&M’s Harajuku store an hour before it was due to open. Clearly, Williamson doesn’t enjoy the name recognition in Japan as Rei Kawakubo of Comme des Garçons, whose collection drew hordes of consumers, many waiting overnight for a chance to buy her designs.

Fumio Sakano came away with a long chiffon dress and an olive-colored leather motorcycle jacket, which seemed to be one of the morning’s most popular styles. All three customers in line behind Fumio at the cash registers were holding one.

The launch of the collection also coincided with the opening of the first H&M store in Beijing, on Qianmen Street, a newly opened pedestrian shopping area located just south of Tiananmen Square. Susan Li and Yuna Song, both students, were first in line and had started queuing at 6 a.m. A gaggle of expats said they were more excited about having H&M in Beijing than Williamson’s collection. “We think it’s more exciting to see the opening,” said Bianca Dawidowsky.

After a 10-second countdown and ceremonial ribbon-cutting at 11 a.m., shoppers swooped into the three-story unit. One young man descended on a row of sequined dresses in the main display window and swept the entire lot into his arms. Nearby staff and outside onlookers cheered him on and gave a round of applause as the man explained the dresses were for his wife.

Women quickly grabbed dresses and peacock-print shirts, snatching them off the front racks as fast as staff could refill them. The wide-studded belts and clutch purses sold out in 10 minutes.