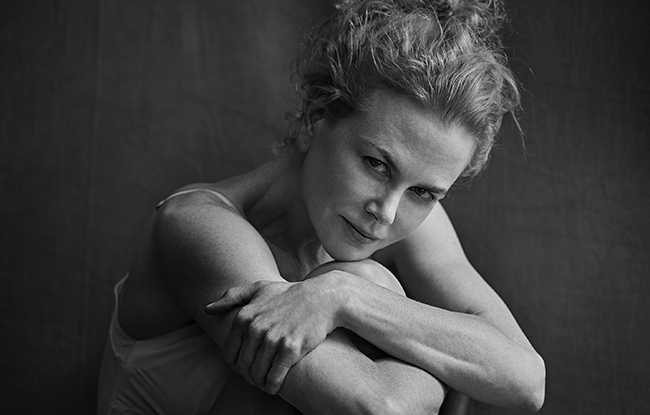 Unveiled at a press conference at the Hôtel Salomon de Rothschild here on Tuesday, the work, titled “Emotional,” captures 14 cross-generational A-list actresses including Charlotte Rampling, Alicia Vikander and Lupita Nyong’o, in their most natural light, sans airbrushing. Marking his third calendar for the Italian tire giant, Lindbergh, who described his approach as “stripping down to the very soul of the sitters,” presents a more honest take on beauty miles away from the clichéd image of the mechanic’s calendar of yore.

A gala dinner celebrating the launch will be held tonight at the Cité du Cinéma film studio in Saint-Denis in northern Paris.

The audience at the conference was also shown a behind-the-scenes film of the calendar, which was shot between May and June in a range of studios and real-life locations — from rooftops to fast-food joints — in Berlin, Los Angeles, New York, London and Le Touquet, France. The limited-edition work, which also features Rooney Mara, Lea Seydoux and Robin Wright, has 40 images in all, mixing portraits and environments.

Helen Mirren, one of its other faces, joined Lindbergh on stage along with fellow sitters Nicole Kidman and Uma Thurman. She hailed the Pirelli calendar’s recent change in direction — carrying on from Lindbergh’s previous efforts as well as the 2016 edition shot by Annie Leibovitz — as marking a major cultural shift.

“Things have been changing over the past five or 10 years and this calendar is a very clear manifesto of that change. We are used to these spectacular images, with such amazing locations and lighting and airbrushing, and here we’re going away from that and saying: ‘No, let’s find the amazing in something that’s simple and human and real,’” said the actress, confessing that, as a lifelong Pirelli fan, she had been expecting something different. “I expected it to be a bit more ‘Pirelli,’ you know, a leotard or bikini, let’s do something nice on this leopard skin rug…that I was going to have black eye makeup and red lips and rock this decadent European kind of style. It was all going to be so cool. But it wasn’t that at all, Peter was like, ‘Take all that makeup off,’ and gave me this big hairy blanket to wear.”

“I said to Peter, was that it? We’ve just shot it? I thought he was doing a test shot….It was very pure,” laughed Kidman, who was photographed in a run-down hotel in Los Angeles. “To be given the calendar at this stage, culturally, is saying there’s choice. As a woman, I know that in my personal life my husband totally prefers me with no makeup. And then there’s the flip side of, OK now I’m going to become a new character and look completely different. But that’s that choice; we’re allowed to have choice. It’s a very important message….It’s also about taking away judgment, the freedom of the individual to be who are we are.”

Thurman, who referred to Lindbergh as a close friend, echoed the sentiment. “Peter’s mission, with everyone involved, of wanting to free women from false standards is extremely admirable. And also Pirelli in making this move towards natural, empowered, free women. It’s fantastic.”

“I think we’re in a good place, I’m not so fond of high heels and bikinis, that’s not really sexy to me,” said Lindbergh, who also cast an unknown in the calendar: Anastasia Ignatova, a professor of political theory at Moscow State University of International Relations. “We’ll leave that a mystery,” he said of why he chose Ignatova.

“When you look back at the Renaissance period, the painters painted the women [of the time] and so today, we know what they looked like, but just imagine the case, in 200 years’ time, when people look back to the year 2000 and say, ‘What happened on this planet? All of a sudden, people’s faces lost all signs of life, what went wrong?’ We have to say something about that. This idea of [erasing] all signs of experience and imperfection, leaving just empty faces. And that this is accepted as the normal portrayal of women today. I think that’s unacceptable.”

Mirren also discussed the sense of naked vulnerability of being photographed. “Peter makes it so organic and loose. It’s incredibly difficult to do what he does because everyone freezes up when they’re being photographed, especially actresses because we’ve all got our red carpet face down. Feeling easy and natural in front of a camera is very difficult. It takes a great master like Peter to allow you to do that,” she said, sharing color on Lindbergh’s technique for reassuring his sitters. “He showed us the photos of the last woman he shot: ‘Look at Kate [Winslet], she’s wearing no makeup, she’s so beautiful….’ it opened us up to not only what a brilliant photographer he is but to the trust of the actress who went before. That was a very [clever] maneuver on your part, Peter….

“Obviously it is part of our job to be photographed, we don’t necessarily enjoy it but it’s part of our job, and to be revealed in a photo is quite frightening in a way,” added Mirren. “It takes a very brilliant, not just photographer, but person to be able to bring that out in anyone. It’s not the moment he clicks the camera, it’s everything he does before he takes the shot that allows the moment to happen.”