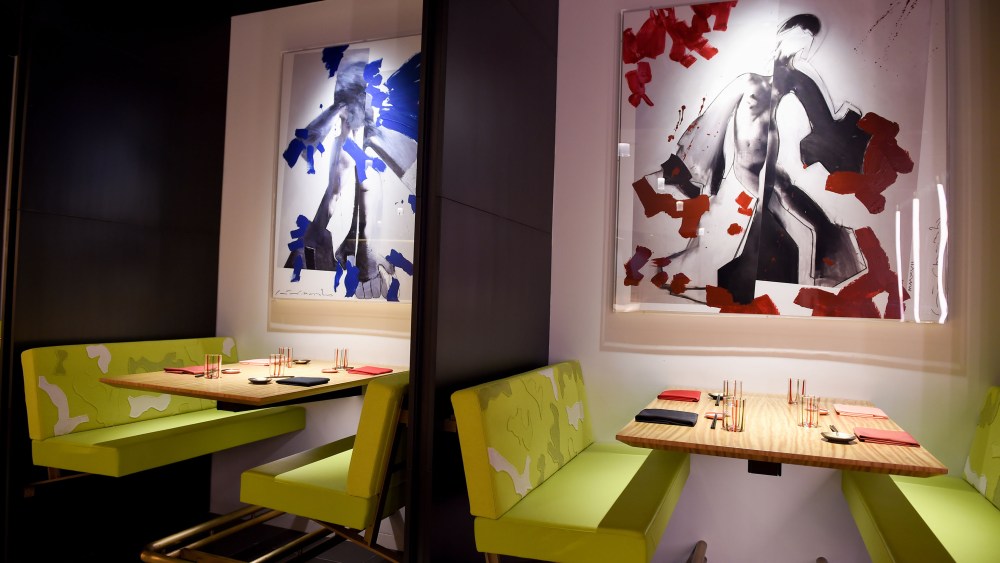 “Completely out of the ordinary for me — I don’t do restaurants, but this was a funny deal,” begins Peter Marino, speaking from his sunny art-filled office on 58th Street in Manhattan. The architect has lent his hand to the soon-to-open restaurant The Lobster Club, located down the street in the Seagram Building.

“Aby Rosen had called me up wanting to do the [former] Four Seasons and The Grill Room, and I said, ‘It’s landmarked, what’s there to do?’ And it turns out, well, you can replace the carpet and the fabric on the chairs. I went, ‘Are you nuts? I’d love to help you, but that’s really — I think you should do that yourselves,'” Marino continues. “Then he said, ‘Well, how about Brasserie downstairs?'”

Brasserie closed at the end of last year following a long run. Opened in 1959, the 24-hour restaurant was a late-night favorite before a devastating kitchen fire in 1995. “Now, that for me as a child of the Seventies, was where all of us went after [Studio] 54 and had breakfast at 4 a.m., 5 a.m., 6 a.m. Everybody was there,” Marino recalls.

The fire resulted in the space losing its landmark status, opening up opportunity for architectural rejiggering. In the late Nineties, the architect team of Elizabeth Diller and Ricardo Scofidio transformed the subterranean space, originally designed by Philip Johnson, into a sort of futuristic resin furniture-festooned ship cabin. Very Y2K, but it didn’t age well.

While it’s not technically his first restaurant — Marino also lent a hand to Beige Alain Ducasse Tokyo in 2005, and Le 68 Guy Martin in Paris — it’s his first restaurant project in his hometown of New York. Given The Lobster’s location, it will mark a homecoming for the business regulars in the area, and also signifies a sort of homecoming for Marino. “My father’s house was on East 55th Street on 1st and 2nd Avenues. I’m fifth-generation Marino in the East 50s — I live on 57th Street. I can’t be more East 50s.”

“It’s my favorite building in New York, Seagram. It makes everything else look bad. It’s still the most elegant office building,” he continues, adding that the space will fill a much-needed entertaining venue to the neighborhood. “Aby very successfully did Casa Lever [across Park Avenue] and that’s where we go. He wanted that same kind of thing here, to bring a little bit back to the East Fifties.” The Lobster Club will offer a tweaked menu created by Michelin-starred chef Tasuku Murakami, serving up modern Japanese brasserie-style cuisine, a lighter foil to the heavier fare served upstairs at The Grill. Sushi will be an emphasis alongside larger plates and lobster (of course.)

Diners will enter on East 53rd Street to a balcony overlooking the bronze-hued bar and open front dining room. Closer inspection reveals a canon of bespoke material detailing — the bar has white ebony bar stools facing a glacial onyx bartop. Lounge seating incorporates blush and chartreuse tones, with banquettes upholstered in a camo print. Flooring features tiles hand-painted by a friend, the artist (and a former classmate) Laura Bergman, who referenced Jackson Pollock’s iconic paint splatter technique. “There’s something just about it that’s not commercial,” Marino adds of the detail. “That was really the Fifties for me — that whole spirit of flicking the paint on the canvas.”

There’s also a heavy emphasis on Picasso, with plates lining the bar and a side dining room featuring a lineup of Picasso-inspired sculptures created by Marino’s studio.

While the days of 24-hour operations are long gone — too expensive — Major Food Group, which will run the F&B operations, will open the space with operating hours from breakfast through a relatively late 2 a.m. A curtain, cut from German black leather, will help the space shift through different dining environments. “The black leather curtains all go back in the wall, so it’s all white for breakfast, half the leather curtains for lunch, and then at night all the leather curtains close,” says Marino, who in addition to his talents as an architect is equally known for his all-black leather outfits.

The side dining room evokes a slightly more swanky, moody aesthetic, with a cherry-red terrazzo floor of hand-cut venetian glass, and snaking red banquette that references a lobster tail, a subtle tie-in to the restaurant’s name. At the back of the house, a collection of fun and cheeky lobster photographs hang in a service hall, which also connect to the upstairs dining spaces. In the back, an intimate private dining area seats 10, and features artwork from owner Rosen’s collection.

The Lobster Club is only one stop on what is shaping up to be a very busy fall for Marino. He designed the recently opened new Louis Vuitton flagship on Place Vendôme in Paris, the Bulgari flagship in New York, and a Chanel boutique opening November 15 in Namiki-dori, Japan. He also has been made an Officier des l’Ordre des Arts et des Lettres and will be awarded 3 AIA New York State Design Awards in November. “Either I’m getting really old, or I’m getting really good,” Marino chides.

Marino’s most anticipated debut, however, may just be his outfit for The Lobster opening party. “I got something very silly that I made up…I will show you just how referential I can be,” he says, fishing around in a drawer before pulling out a bespoke pair of lobster claw mittens, made from the same black leather as the restaurant’s curtain. “And I have a hat with antennas, kids.”