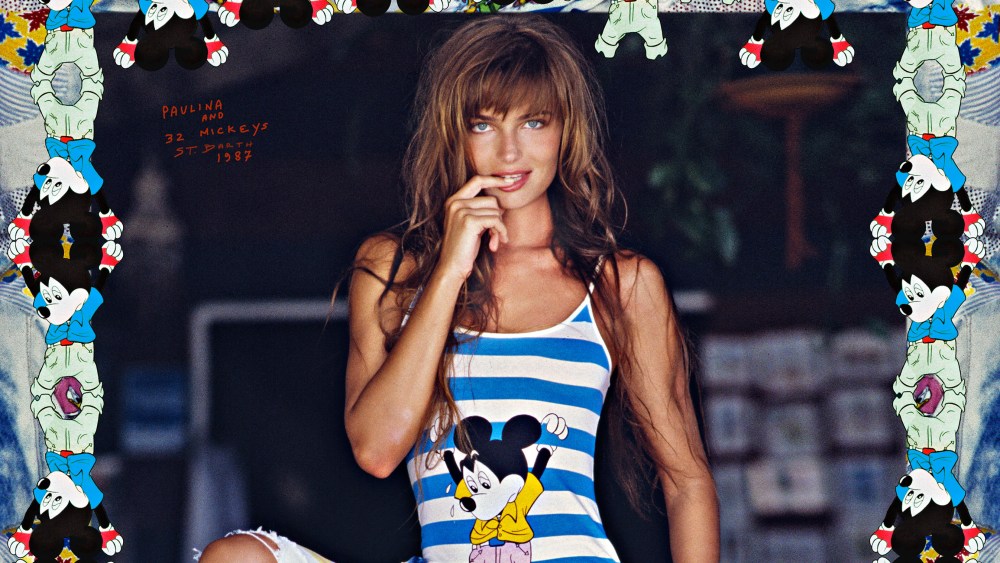 Photographer and architect Marco Glaviano has dipped into his past to create his first NFTs.

In an interview from St. Barths, where he resides for part of the year, Glaviano discussed how technology is fueling creativity, the not-so-interesting state of fashion photography and upcoming projects.

Last week the lensman dropped his five unique and single-edition NFTs featuring Cindy Crawford, Paulina Porizkova and Iman, as well as Instagrammer Alexis Ren (who has over 15 million followers.) There is also a depiction of a glitzy Donald Trump portrait he shot for Vanity Fair in 2014.

Dubbed “Beauty and the Beast,” the NFTs were unveiled on the new digital art platform Pinhole. Glaviano also has a new exhibition opening in St. Barths.

Glaviano’s lengthy career included contracts with Vogue and Harper’s Bazaar, and shooting runway shows and advertising for Valentino, Giorgio Armani, Robert Cavalli and others. In 1995, he designed and founded Pier 59 Studio. He sold it 10 years later after it became too much of a distraction from his artistic work. From his viewpoint, the background noise is drowning out major media.

“Everybody is publishing magazines. The housewives in Idaho, who wear clogs, tell you what to wear. How can you control that? It’s impossible,” he said.

The downturn in advertising isn’t only impacting publishers’ financial security but compensation for photographers and other talent. In addition, influencers are getting paid a lot even though “they don’t always know what is right or elegant. There’s no filter,” Glaviano said. “When Diana Vreeland was editor in chief at Harper’s Bazaar, nothing went in those pages that wasn’t super elegant. There was strong control. Now there is absolutely no control. Anybody can put anything on the internet. And everybody’s looking at it, too. In that sense, it’s a disaster.”

At 79, he said he has always been interested in technology and first shot scans of a film shoot to relay a large pixel effect for American Vogue in a 10-page spread in 1982. He went on to work with Fuji, Kodak, Phase One and other companies, testing new digital cameras and equipment that they were investing in.

Part of the appeal of NFTs was that artists, not just photographers, can have control of their images. “The galleries have always been very greedy preponderantly. Some of them became more famous than the artists they represent. With NFTs, there is this encryption where the artist will always own the images and know who has it and what they are doing with it,” Glaviano said.

Speaking of the importance of NFTs being traceable, he said that can’t be done with digital art or classic art. “You never know where it ends up,” he said. “NFTs are the future. We have to go forward, right? I don’t like people who don’t like progress. Progress is good. It causes some casualties, of course. Every time you improve something you hurt somebody else. But overall, it’s a good thing.”

Believers in the good ole days are kidding themselves, he said, “It’s not true. The good ole days were not so good [laughs]. Either way it gets us motivated…look what’s happening with women. Finally — it’s been thousands of years. Now they’re getting on their own. It’s still difficult but we have to embrace the future,” Glaviano said.

Ten years ago he stopped shooting film due to digital’s superior quality. “There’s a debate about it, but only because most people don’t really know how to use it. There is no need to shoot film anymore for any reason. I still shoot film even now sometimes. It’s a romantic thing. It’s like going by horse instead of car. Horses are beautiful and so is film. But for practical reasons it’s not necessary anymore,” Glaviano said.

Glaviano opted to represent the work that he has been known for — supermodels in the ’80s and ’90s, which is “what people really like and they are popular with collectors.” Acknowledging the renewed interest in several models from that era including Porizkova and Crawford, he said, “After them, there was nobody like them. The taste changed. The fashion changed. They were [among ]the last supermodels. They were household names. They were famous like rock stars.”

During the ’80s, the photographer shot four calendars with Crawford and sold more than one million each year in bookstores. “It was a big thing at one time, especially as decor in university dorms.” Glaviano said. “We did two with Paulina…that was the golden time of the models when John Casablancas had all the best models. Then everything changed. People are very interested in this now.  I know because there are a lot of people interested in this now and a lot of people buying the prints.”

He has always been interested in technology, because photography is a craft, not just art. As for how influencers are now eclipsing models “totally, totally,” he said, “It’s a different business model. Let’s face it — the great magazines are gone and they have been replaced by social media. They used to put a lot of effort into doing those pictures…I really miss it and the people do, too. They are not finding influencers at the same level even though some of them are.”

While “it’s a shame” that the amount of artistic experimentation has waned in fashion photography as many conglomerate-owned designer houses and brands are increasingly focused on quarterly results, that isn’t about to change, Glaviano said. With 10-day Caribbean shoots for Vogue being long gone, he said, “It was a big investment in time, money and art.”

With millions of photographs “all over the place,” it is a little difficult to single out outstanding talent. His daughter Alessia, who created and oversees the Vogue Photo Festival, has shown him some interesting work. “But there’s a lot, a lot. It’s hard to tell,” he said, speaking more digitally.

As for what interests him now about fashion, Glaviano said “nothing,” before lauding the “democratization of fashion and making good design available to everybody.” Companies like Uniqlo that “can create all of this incredible, affordable clothing of very good quality all over the place so that everybody can buy it. It’s very democratic. I have jeans that designers gave me that cost $1,000. I buy Uniqlo ones in white for $28.”

Recalling fashion photography standouts Hiro, Richard Avedon and Irving Penn, Glaviano recalled going to see an exhibition of Penn’s images of crushed cigarettes at the Marlborough Gallery in 1975 or 1976. “It was so incredible and I got so depressed that this guy could do art out of cigarette butts. [I thought], I give up,” he said, laughing. “That was photography. Now is a little bit different.”

Looking ahead, Glaviano emphasized that the possibilities for photographers, artists and other visual specialists are “incredible,” due to the technological tools they have access to. He said, “If somebody like Michelangelo had a computer like we have now, who knows what he would have done. It’s not true that all this [technology] is bad. It’s just that some people do bad art with technology. They always did. They did it with paintbrushes, too.”

But NFTs and digital tools can unleash creativity, Glaviano said, “It frees your imagination to go places before you could not go.”