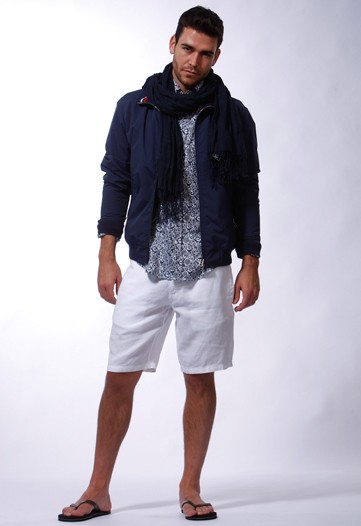 Here’s a look at newcomers to Pitti Uomo:

Vilebrequin is branching out of swimwear with its first sportswear collection, as well as two new licenses, one for underwear and one for children’s wear, all of which will be on display at Pitti Uomo when the brand exhibits there for the first time in many years.

“It’s all going to have the Vilebrequin DNA, a beach-environment lifestyle and a little bit transitioning from the beach,” said North American chief executive Thierry Prissert. “You won’t see suits or ties.”

The sportswear collection will include T-shirts, polos, lots of linen shirts, cotton knits, light sweats, and shorts and trousers in cotton or linen. Shirts, trousers, knits and swim trunks will all retail in the $200 range. The brand will also have bags for the first time and new hat styles.

As always, the swimwear — beloved by bon vivants since the brand was founded in Saint-Tropez in the Seventies — will be offered in a lot of novel prints. The brand has also developed its first reversible swimsuit, patterned on one side and solid on the other, which can pass for a versatile pair of shorts.

Also on exhibit will be Vilebrequin underwear and loungewear made under a new license with Madamar. Briefs and boxers will start around $45. The partners are aiming for initial sales of 3 million euros, or $4.22 million at current exchange, going up to 10 million euros, or $13.6 million, in four years.

Children’s wear has been licensed to Altana SpA. That collection will reflect the same categories as the new adult sportswear range, and will launch at Pitti Bimbo, a week after Pitti Uomo ends. The line will retail for $65 to $110.

Vilebrequin will control U.S. distribution for both new licenses through its New York showroom.

“Naturally we’re going to carry some in our own stores, and we are going to do selective distribution through department stores,” said Prissert.

Meanwhile, during Pitti Uomo, Vilebrequin will celebrate the redesign of its Florence boutique, the first one to reflect a new concept being rolled out. The interior used to be very white; now it’s light blue. And the space is configured to accommodate all the new product categories.

“But it still represents the beach and escape,” stressed Prissert.

Etiqueta Negra
This Argentine brand, Spanish for “black label,” reflects the privileged lifestyles of the polo world in its sleek and modern styles. Etiqueta Negra is coowned by Federico Alvarez Castillo, who is one of the world’s largest collectors of antique cars and motorcycles; Argentina’s champion La Ellerstina Polo Club, and a Colombian private investment fund managed by TribeCapital Partners SA.

Pitti Uomo marks the brand’s first effort to open a wholesale business. Etiqueta Negra has nine retail stores in Argentina and one in New York. It is planning to open a unit in Miami by the end of the year, and four in Europe next year. The stores display vintage race cars and motorcycles and equestrian paraphernalia. They carry shoes and boots handmade for Etiqueta Negra by Casa Fagliano, the company that makes the polo boots for Prince Charles and his family.

But apart from the handmade footwear, the chain’s prices are relatively accessible. Sport shirts, jeans, cotton sweaters, leather belts and swim trunks all retail for less than $100; dress shirts and blazers, for less than $300.

Brooks Brothers
This iconic American retailer is ready to expand its overseas wholesale business. And although Pitti Uomo is not the epicenter of luxury tailoring brands that it used to be, Brooks Brothers decided it would be the best place to hold an exhibit to educate the international market about the brand and its history.

“We’re going to highlight a few of the spring looks, emphasizing color and pattern, and we will have one or two forms rigged with Black Fleece,” the Thom Browne collaboration, said Lou Amendola, chief merchandising officer. “But it’s really going to be 80 percent an overview of the Brooks Brothers brand.” The company’s presence will be purely a marketing effort, and interested buyers will be directed to a showroom in Milan, where they’ll find an emphasis for the season on very bright colors, he said.

“In our men’s sportswear area, there is a lot of knitwear, cardigans and vests, and a big emphasis on pique polos. We have a series of fun polos where our logo is done in a multitude of contrasting colors and multicolor. There are also embroidered pants and madras and seersuckers. One overall word to describe the collection is ‘happy.’ It’s about bright colors and feeling good. It’s not one of those somber responses to the economy. We believe when people do dress up, they want to be bright and cheerful,” said Amendola.

And in the core category of tailored clothing, the movement to slimmer suits with shorter, two-button jackets continues unabated, he said.