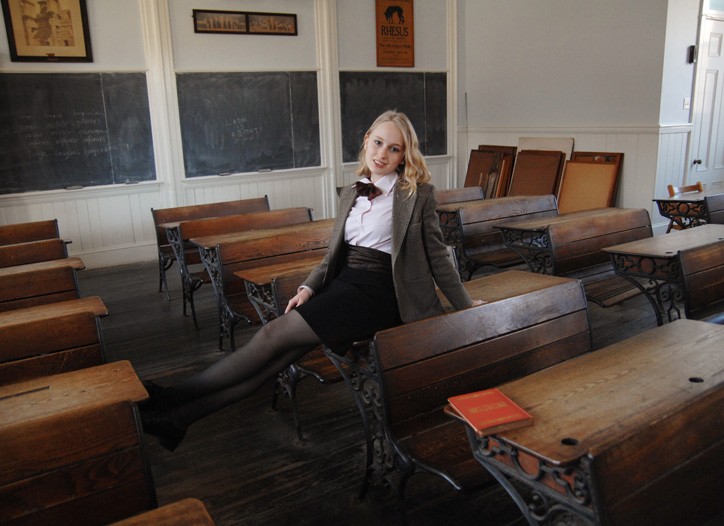 They don’t call it “preppy” for nothing.

After all, three elite boarding schools — Concord Academy, Milton Academy and Phillips Andover — WWD visited recently have reputations of being “college for teenagers,” with intense academic demands that can make wardrobe secondary.

So whether hoofing to class across campus in late-winter snow or cramming in the library, most students’ go-to items are Ugg boots, jeans, North Face jackets, Patagonia fleece, American Apparel leggings and book-stuffed L.L. Bean backpacks.

That’s not everyone’s look, though, since preppy is more than one-dimensional. These are, after all, elite private schools and they don’t come cheap — meaning the students are a sophisticated crowd. Thus those who care about fashion demonstrate plenty of savvy — whether they shop Target or have a mother who thinks “Chanel.” Then there are those like Concord Academy senior Daphne Kim, who will stick to her 4-inch heels whether the quad is icy or not.

Given an opportunity to wear anything at all to a photo shoot, these young women chose — universally — skirts and dresses. Regardless of budget, they also showed a huge fondness for thrift, consignment and vintage stores.

Perhaps Amelia Fitch, a Concord Academy junior, captured the prevailing mood of exploration and delight in dressing best: “I think of myself as a character in things a lot of days,” she says. A Gossip Girl perhaps?

Here, a random selection of the prep school set and what they wear, buy and listen to.

Phillips Academy
Located in Andover, Mass., Phillips — or PA to students — is the quintessential New England liberal arts high school. Paul Revere forged the school’s original motto 232 years ago, and everyone from both Bush presidents to Humphrey Bogart to Dr. Spock to novelist Julia Alvarez have attended. One thing hasn’t changed: It’s still a major feeder for Ivy League schools (69 to Harvard and 54 to Yale in the last four years, but who’s counting?). With 300 courses on offer, PA throws in a few for the sartorially minded — costume design and a study of fabrics. But a review of student newspaper The Phillipian’s “Look of the Week” feature is a far better measure of the student fashion zeitgeist.

Milton Academy
Perhaps the preppiest of the three, the school serves grades K-12, and educated not only successive generations of Brahmins (witness Forbes and Saltonstall named buildings) but also Robert and Ted Kennedy. Today, it’s a sports powerhouse known for sailing, tennis and hockey. Seniors design and work on a monthlong independent project at the end of their final year.

Name: Marilyn Petrowski, 2010
Age: 17
Hometown: Wilton, Conn.
Style m.o.: In her clean, modern classics — pencil skirts, asymmetric tops, tall boots — Petrowski is dressier than the average Miltonite and has a keen understanding of how investment works, in fashion terms. For Christmas, she prepped her mother on the one gift she wanted to receive and so scored a black Chanel chain-strap purse. “It was pretty much my whole Christmas. My dad doesn’t understand how a bag could cost this much,” she laughs. “I have to be able to give it to my grandkids.”
Closet faves: The Chanel purse, J. Crew beige boots, a Nom de Plume floral dress and a blue plaid Millau shirt.
Shops: LF in Harvard Square, Anthropologie and Marc Jacobs.
Spends: $100 to $200 a month.
Blogs: Jak & Jil, Fashion Copious and Sea of Shoes.
Music: Kings of Leon and Rolling Stones.


Concord Academy
Founded in 1922 as a girls’ school and the alma mater of Caroline Kennedy Schlossberg, Concord Academy has slate blue or white antique clapboard “houses” that present a quaint facade along the town’s main street. Behind the historic exterior, however, CA is known for small classes, a progressive spirit and strong arts programs, including courses in fiber arts. Each year, the school hosts “Project Runway” CA, a competition where students create three garments (one has to be of recycled materials) and use friends to model in a finale.