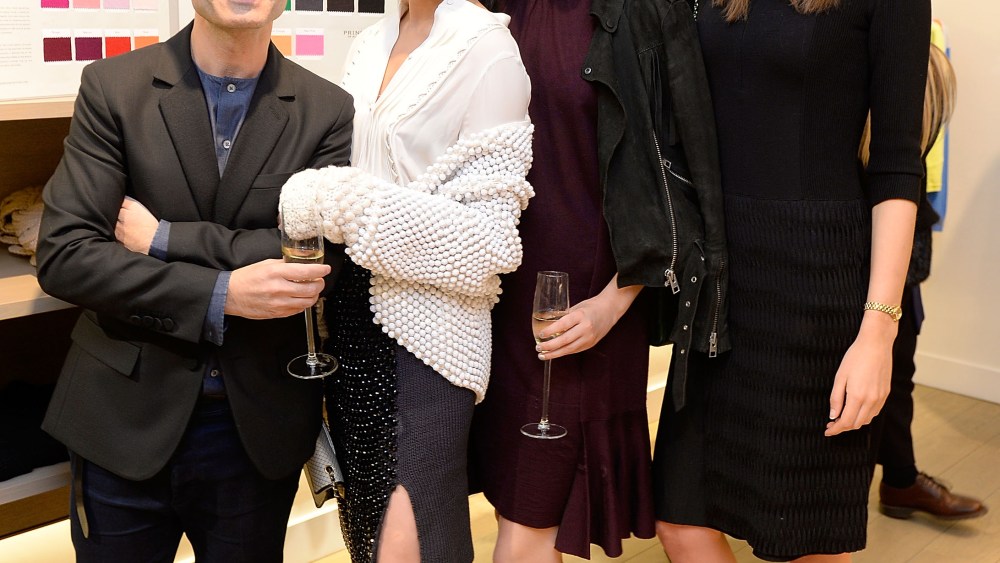 LEARNING CURVE: Pringle of Scotland and Swarovski embraced Frieze week in London in two different ways, with one brand focusing on art and the other, science.

Nicosia, the brand’s head designer, was talking about Pringle Deconstructed, where customers can whip up their own bespoke cashmere sweaters online.

Pringle marked the launch of the project with a dinner across the street from the store, at Scott’s in Mayfair, with guests including Bryan Ferry, David Shrigley, Isaac Julien, Mat Collishaw, Polly Morgan, Elaine Reichek, and Leah and Jo Wood.

“We were super excited to see the loom,” said Julien, who had brought his friend Reichek, the visual artist whose work involves hand and machine embroidery. Julien was referring to the handloom from Scotland that Pringle had temporarily installed in the store window, complete with a knitter who was busy making one of the bespoke designs.

Frieze marks the start of a busy period for Julien, the British filmmaker and installation artist who will be showing his new work, “Stones Against Diamonds,” at Art Basel Miami in December.

“It’s a 10-screen work shot in an ice cave in Iceland, and a meditation on the work of Lina Bo Bardi,” said the artist, referring to the Brazilian modernist architect.

Shrigley, meanwhile, is preparing for his first show in Latin America — in Guadalajara, Mexico — and for the unveiling of his new design for one of the plinths in London’s Trafalgar Square.

“It’s a thumbs-up — an elongated one — made from brass and we’ll unveil it in 2016,” said the Scottish cartoonist and artist known for poking fun at bits of everyday life.

Earlier in the evening, at the Victoria & Albert Museum, Nadja Swarovski gave a talk about the importance of research to the brand. “We always look forward to working with educational institutions — and in particular their science labs,” she said.

“We thought it was going to take us 20 years to be able to take the lead off the crystal and keep the quality — and it only took us two years,” the executive continued, referring to Swarovski’s recently patented formula for lead-free crystals. “That’s why our team of chemical engineers is so important, because that is where the solutions lay.”