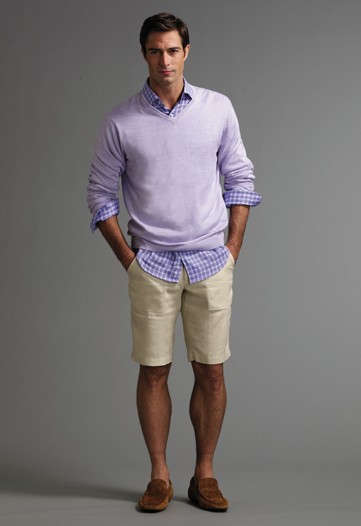 In a few short months, Saks Fifth Avenue’s newly launched Men’s Collection has grown to around 15 percent of its men’s sales. Black Brown 1826, the Joseph Abboud-designed brand exclusive to Lord & Taylor, already accounts for 20 percent of the business after only three seasons. Bloomingdale’s revamped private brand — The Men’s Store at Bloomingdale’s — is expected to double its sales over the next few years. Nordstrom is testing the waters with a new men’s collection named Napoli di Nordstrom that made its debut in stores and online for fall, and Macy’s, long a leader in this category, has made no secret of the fact that its private brands have been a bright spot this fall.

The reason for the newfound success is that private brands, long viewed by retailers as an opening price point classification business, have undergone a transformation. Instead of just slapping a house brand on a lower-priced dress shirt or sweater, retailers are creating full collections and devoting considerable resources internally to ensure their success. They have hired marquee designers and managers to oversee these brands, and the result is stores can offer merchandise that differentiates them from their retail competition and is clearly defined to appeal to their customers. They’re also able to control pricing and promotions more effectively, bolstering profits at a time when their bottom lines need a little TLC.

“Strategically, retailers are going in a mandatory direction,” said Robert Grayson of Grayson/Hughes, a retail consultancy. “The wholesale to retail, retail to consumer model is just not a go-forward model anymore. A vertical structure is faster, more flexible and more specifically addresses consumer preferences. And the price advantages are overwhelming. If I were a department store, I would be developing vertical product as fast as I could.”

Joseph Abboud agrees. “There’s been a sea change in retail,” he said. “Labels alone are not going to carry the day anymore.”

Saks realized that when it started looking into creating a men’s collection in 2007. The retailer hired men’s veteran Peter Rizzo, whose career includes stints at Barneys New York, Bergdorf Goodman Men and Polo Ralph Lauren, as a consultant to oversee the line. The first product was tested for Father’s Day last year, but the real push came this fall when the Saks Fifth Avenue Men’s Collection rolled out to all its stores that carry men’s wear.

Arguably the most important launch at the store for the fall season, SFAMC encompasses all product categories — everything from ties, shoes and socks to suits, cashmere sweaters and outerwear.

“We’ve always done men’s private label, but we’ve never done it like we’re doing it,” said Ron Frasch, president and chief merchant of the luxury retailer. “It used to just be a commodity business, not necessarily a concept for a store. Our approach now is a concept for a store, one with a fashion filter that is centrally managed. From hosiery through tailored clothing, it has a point of view that is consistent.”

The collection is 20 percent more expensive than the store’s opening price point, but has a “very distinct fashion vision,” said Frasch. Noting pricing integrity is important, he said what’s even more vital is being able “to create a distinctive men’s department in a day when a lot of the same brands are in the same doors.”

Frasch added: “We’re treating it like it’s its own brand, and it’s been performing above expectations. We actually underestimated the appreciation for it.” Already, the label accounts for a percentage of men’s sales in the “mid-teens,” Frasch revealed, “and we’re just scratching the surface. It blew out of the store when nothing else was selling. We’re now chasing merchandise and resetting plan.”

Describing SFAMC as a “classic fashion vibe with a European flair,” he said Saks plans to add “more elements and develop more levels of product” going forward. “Our idea is to expand and develop it further. It’s got a lot of legs,” Frasch said.

To further facilitate the growth of the brand, he said Sunny Diego, formerly buyer of men’s accessories, has been promoted to senior director of the Saks Fifth Avenue Men’s Collection and private brands, and will coordinate all initiatives for SFAMC going forward.

Lord & Taylor has also had success with its Black Brown label. Jonathan Greller, senior vice president and general merchandise manager of men’s for the store, said: “We don’t describe Black Brown as a private label; it’s a collection. And it’s doing very well. It now accounts for 20 percent of our [men’s] business across all categories. As we have more ‘like’ brands with Macy’s, Bloomingdale’s or Nordstrom, this is a way to differentiate.”

Abboud, the designer of the collection, agrees. “This is not a private brand. This is a designer collection exclusive to Lord & Taylor and The Bay [L&T’s sister company in Canada]. I consider myself a guardian of the brand — it is designed and created and has its own DNA.”

Greller called Black Brown “our number-one growth business. We need to entice customers with great product at great value. If we do that, we’ll have a good season.”

Greller said that, like SFAMC, Black Brown is not opening price point but offers a strong price-value relationship. “Our cashmere sweater for $130 feels like a $350 sweater, and our merinos for $50 feel like they should be $100.” The offering is 90 percent key items and 10 percent fashion pieces, he said, and has a traditional sensibility. “We’re unapologetically classic.”

The top-selling items are sweaters, he said, which have grown to encompass 60 percent of the store’s men’s sportswear business. Dress shirts are also popular, accounting for 35 percent of sales.

“We will challenge Black Brown against any vendor product,” he said. “The quality is amazing.”

Greller said that right now, men’s at Lord & Taylor represents 10 to 12 percent of the store’s $1.1 billion in sales, a number he hopes to increase significantly in the future. But helped by Black Brown, men’s, with a rise of 9 percent in sales in the third quarter, outperformed the overall store, which was up 6 percent. “We’re having a good men’s season,” he said.

At Bloomingdale’s, this fall marked the departure of two longtime private labels, the classic Joseph & Lyman and the more-contemporary Metropolitan View. “We just consolidated them into one: The Men’s Store at Bloomingdale’s,” said David Fisher, executive vice president and general merchandise manager of men’s.

“Eight or 10 years ago, private brands were what was on everybody’s minds,” he said. “It was a way to offer cheaper prices and better value.”

Times have changed. When Bloomingdale’s set out to reposition itself as the destination for bridge resources and exited a lot of brands that didn’t fit its new image, the retailer stepped back from private brands in favor of more desirable labels such as Armani or Hugo Boss, Fisher said. “Private label took the second shelf.”

The Men’s Store at Bloomingdale’s now accounts for 10 percent of the company’s men’s business, Fisher said, “and it could be 20 percent if it’s done correctly.”

He acknowledged Saks “spent a lot of money and did a better job marketing their private brand this fall,” but Bloomingdale’s is ready to step up to the plate. The company has charged Dan Leppo, vice president of men’s furnishings and accessories, to head a private brand development team. Some time next year, the store will begin offering tailored clothing, “most likely sourced in Italy,” as well as some new bottoms under the Bloomingdale’s label. And within 18 months, Fisher said, “we will begin developing younger product.”

He explained: “We believe the world has changed permanently when it comes to value consciousness. People aren’t going to go from Neiman Marcus to H&M, but they may now spend some money at Neiman’s, some at Bloomingdale’s and some at H&M.”

He said department stores, which are devoted to branded merchandise, will never be able to “devote the same resources to creating product that a J. Crew or Abercrombie do, because they’re vertical retailers. But we can devote resources to it in a very focused way. Somebody may not want to spend $200 for a John Varvatos shirt, but they’ll spend $98” on a Men’s Store at Bloomingdale’s one.

Fisher said Bloomingdale’s has also begun showcasing its private brand as a collection within stores as well. At the 59th Street flagship, for instance, a shop on the main floor features cashmere and merino sweaters, wovens and other items. “We’re merchandising it as a collection with depth in items,” he said.

Bloomingdale’s sister, Macy’s, has always been a leader in the private brand category. This fall, the department store signed a one-year deal with singer-songwriter Ne-Yo to be the face of Alfani Red, the contemporary component of the company’s long-standing Alfani brand. Alfani, which was launched in 1985, is Macy’s top-selling men’s brand, bigger than any national brand in the chain.

The company also offers six other private brands: American Rag, Club Room, I.N.C., Via Europa, John Ashford and Tasso Elba. On the company’s third-quarter earnings call in mid-November, chief financial officer Karen Hoguet said private and exclusive brands were “very strong in the quarter, as they have been all year. Our ability to offer great fashion at good value in our own brands is really paying off.”

Quietly this fall, Nordstrom has introduced Napoli di Nordstrom, a new private brand that offers luxurious fabrics and classic styling at a more-affordable price point. For example, three-button cashmere-silk sport coats were being offered on the retailer’s Web site for $695 and silk-cashmere ties were $89.50.

Last year, the Seattle-based retailer hired Arnold Brant Silverstone, creator of the Arnold Brant label now owned by Oxford Industries, to serve as design director of men’s dresswear for the Nordstrom Product Group. It is believed he is overseeing the Napoli collection, although neither Nordstrom officials nor Silverstone would comment on the line.