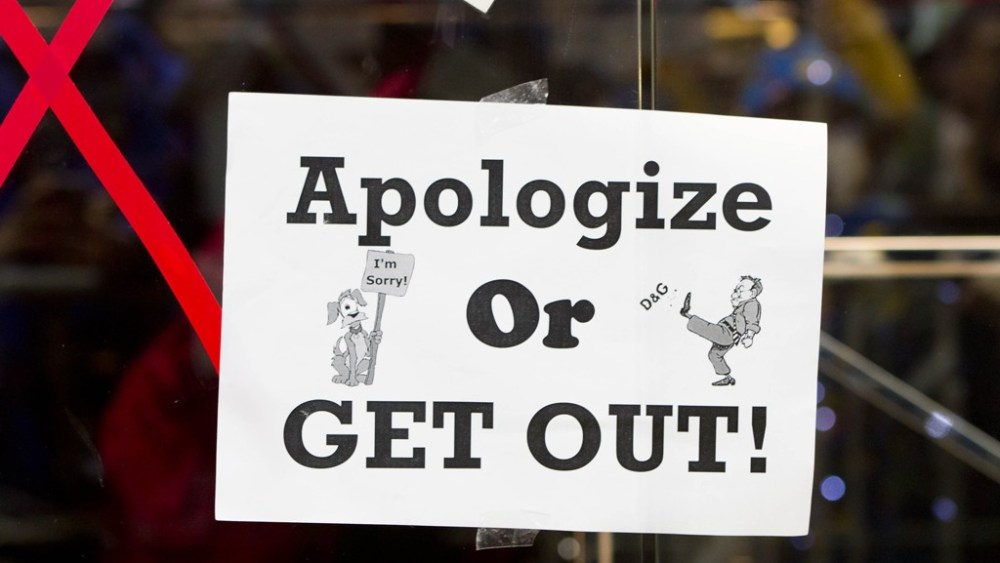 HONG KONG — Protesters gathered for the third time in a week in front of Dolce & Gabbana’s Canton Road store on Sunday, accusing the Italian brand of racism and demanding an apology over an incident in which a Hong Kong resident was allegedly barred from taking a photo of the store.

About 100 protesters braved the rain Sunday afternoon to stand in front of the Canton Road store, which was closed at the time. Other stores nearby also shuttered their doors, including a Hugo Boss. About 60 protesters assembled Friday evening, according to local media reports. These gatherings were considerably smaller than the original protest last week, which reportedly drew more than 1,000 people. The protests have been organized through a Facebook campaign.

On Sunday, the protesters were yelling “Apologize! Apologize!” in Cantonese over and over. A few passing cars on the busy street honked in solidarity with the protesters.

Similarly, the group on Friday took photographs of the store and shouted slogans against the brand, Oriental Daily News reported on its web site. Footage on the site showed police putting up fences and one protestor shouting and hitting the windows of the store.

The protests stem from an incident in late December in which a Hong Kong resident was allegedly barred from taking a photograph of the Dolce & Gabbana storefront. Later, local media reported that Dolce & Gabbana bans Hong Kong Chinese from taking pictures but allows Mainland Chinese and foreign tourists to do so.

Dolce & Gabbana has declined to discuss the specifics of the incident or its policy on photos but it issued a statement last week, stating that “controversial statements reported in the Hong Kong press have not been made by Dolce & Gabbana nor its staff, and we strongly reject any racist or derogatory comments.”

Bell Poon, a 17-year-old student who came out to join the Sunday protest with his friends, voiced a similar view. “We have to protest for our freedom. If they haven’t apologized we will still come here. [This] is Hong Kong. We are Hong Kong people. This is our responsibility.”

Many of the protesters carried signs. On Sunday, each time someone taped a sign to the store windows, a great cheer would erupt from the crowd.

Protesters present on Sunday were adamant that more protests would follow until the Italian brand has apologized.

On Friday, an EOC spokeswoman said the organization did not have any further updates on the situation.

“The letter that we issued to D&G on 11 Jan was a reminder to the company about the importance of treating all individuals with respect and dignity, and that differential treatment between locals and mainlanders as reported in the media would affect the company’s image. It was not specified that they must give a reply and we have not yet received a formal reply,” she said.