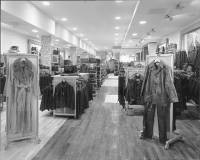 Unfortunately for them, in the words of Mark Twain, everybody talks about the weather, but nobody does anything about it. With unseasonably warm weather having put a damper on sales at the end of 2002, the recent arctic blast over much of the country has many outerwear companies and observers feeling fairly sanguine about the next few months.

However, an unexpected warm spell could lay waste to the best-laid plans of the $3.5 billion U.S. retail outerwear market, not to mention the stock price of the sector’s publically traded firms.

As Doug Prentice, vice president of outerwear at Columbia Sportswear Co., said: “Weather is the single-most-important factor that we can’t control.”

After all, weather forecasts from planning services are only so reliable. And weather insurance, that hot new insurance product so beloved by the energy industry, doesn’t necessarily make a good fit for the apparel business.

“Our chief financial officer looked at the numbers and at first it looked like a pretty good deal,” Milstein said. “But when we questioned them, they didn’t seem to know what they were selling us, so we didn’t go for it. That company turned out to be Enron, so that worked out pretty good for us.”

Enron-bashing aside, the outerwear industry’s fortunes are very much attuned to the vagaries of Mother Nature. As Milstein put it: “With weather, you go with the flow. You have no choice. We believe in coats, and when it gets cold, people need coats.”

That said, Burlington got off to a slow start last fall, when markdown pressures transformed a healthy sales gain into only slight profit growth in the second quarter. As reported, for the most recent quarter ended Nov. 30, the Burlington, N.J.-based retailer reported that net income nicked up 0.7 percent to $41.6 million or 93 cents a diluted share. That compares with earnings of $41.3 million, also 93 cents, in the year-ago quarter. Moreover, Burlington’s earnings per share fell short of the Wall Street estimate by a nickel.

Sales for the period rose 5.2 percent to $782.8 million from $744.2 million a year ago, as same-store sales dipped 1.3 percent. Markdown pressure caused cost of sales to increase 40 basis points to 60.8 percent of sales from 60.4 percent last year.

“There are vicissitudes in all of retail,” said Milstein. “With the unseasonably warm weather, it was a little choppy there for a bit, but now there’s continued cold and the customers are back in the stores. We feel bullish.”

Bentley Offutt, an analyst with Baltimore-based Offutt Securities Inc., said Burlington’s disappointing performance had less to do with weather than with more basic customer service issues.

“Weather is incredibly important, but I don’t think seasonality for outerwear companies is necessarily more of a burden than it is for other businesses,” Offutt said. “At Burlington, the results were a little puzzling. I suspect the markdowns were a result of misplanning and that they also need to be more friendly to the customer. Their shopping environment could be more pleasant and they could have a more friendly policy regarding returns and credit.”

More solidly, Columbia Sportswear had an impressive most recent quarter, and with the ongoing cold, Wall Street analysts are more confident.

All of this led Lehman Bros. analyst Robert Drbul to raise his full-year consensus estimate to $2.45. Like Drbul, Wells Fargo Securities analyst Jennifer Black also raised her full-year forecast, to $2.47 from $2.44 and sees a well-positioned company capable of withstanding above-normal temperatures.

“Historically, Columbia’s business has been more correlated with weather patterns versus economic trends,” wrote Black in a research note to investors. “We believe that the company’s fourth-quarter plan is conservative and that expectations can be met should the winter yield warmer-than-usual conditions and that they can be exceeded should winter follow a normalized pattern.”

A big part of Columbia’s success, said Prentice, is planning carefully and conservatively, and “playing a sort of cat-and-mouse game” with the market and the elements.

“We look at historical data, plan conservatively and encourage our buyers not to buy too much,” said Prentice. “If it looks like we may have problems with the weather, we will work very diligently in September and October to manage our inventories.”

One outerwear firm whose misfortunes have gone well beyond the weather-related is Wilsons The Leather Experts Inc., as the Brooklyn Park, Minn.-based retailer has suffered a number of blows over the past year-and-a-half.

First was the company’s ill-timed foray into the travel business with its September 2000 acquisition of El Portal and the April 2001 purchase of Bentley’s travel stores, which were soon hammered by the events of Sept. 11, 2001. The troubles did not end there.

“Clearly, the last 18 months have been very difficult, compounded by a number of things,” said ceo Joel Waller. “Sept. 11 and the sluggish economy have been tough. An extremely warm winter in 2001 and warm weather in November and December of 2002 hurt. The third thing that hurt us was the West Coast dock strike. Eighty percent of the leather apparel we sell comes from the West Coast. It was a very promotional year.”

The firm’s loss widened in the quarter ended Nov. 2 to $17 million or 84 cents a diluted share on a 5.9 percent drop in sales to $132.6 million from a year ago. Same-store sales for the period dropped 7.2 percent, due mostly to reduced revenue from decreased mall traffic.

At this point, since Wilson’s near-term outlook isn’t too rosy, Waller said the company’s plan is to focus on inventory reductions in preparation for spring and to focus on its accessories business, which accounts for 30 percent of sales. After that, said Waller, “we’re getting ready for fall.”

Waller added that while Wilsons considers weather to be a significant variable in the way the company plans, it is a comparatively minor one.

“Weather is a factor,” he said, “but we really plan for fashion. It’s more important for us to get trends. Our customers are mainstream and middle American. When basics come back, for example, bomber jackets, our business is good.”

As for weather forecast-based planning, Waller said he finds it to be less than helpful.

“Everybody reads those reports, but I don’t know how useful they are,” said Waller. “They’ll say something like, ‘It’s going to be 4 degrees colder during some period of time.’ Well, what does that mean? How does that correlate to sales?”

Weintraub said that since the weather turned frigid, business has been strong.

“I’ve heard from some quite large private companies that their inventories are clean and business is wonderful,” he said. “To me, the outerwear story is the weather. If companies don’t do well when it’s cold, then you have to blame management.”

Time will tell. Outerwear retailers and vendors are slated to begin releasing their latest operating results in the next few weeks.