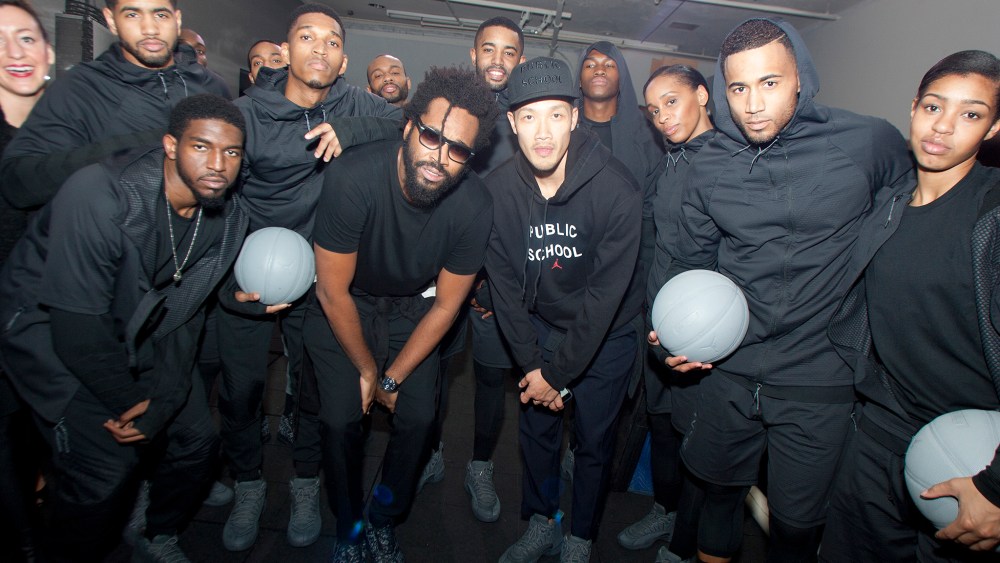 The Public School boys are busy. When designers Dao-Yi Chow and Maxwell Osborne aren’t working on their own line, they’re collaborating with Tumi on luggage, curating art for Sotheby’s, or pushing things forward at DKNY, where they were appointed creative directors earlier this year.

Chow, who still considers Public School an emerging brand, thinks this type of schedule is par for the course.

“Being a smaller, up-and-coming brand, there are opportunities that are presented to us that we feel are right and enable us to do certain things,” said Chow. “Hopefully, we are making the right choices and picking the right partners.”

On Thursday night, they were celebrating yet another partnership — this one with Jordan Brand — in New York City at Terminal 23, formerly Café Rogue, before the athletic brand turned it into an indoor basketball court and event space last year.

Guests including Chanel Iman, Jenna Lyons and rapper Fabolous huddled together to see the thematic presentation of Public School’s second collaboration with the Jordan Brand. A cadre of sporty models filed onto the court and created a rhythmic beat by dribbling glow basketballs in the dimly lit space. The presentation ended with two limb-twisting performers intertwining their bodies while holding a basketball.

The models wore the design duo’s take on the Air Jordan XII sneaker along with cobranded Jordan and Public School apparel, a new addition to the partnership. According to Chow, the Jordan team wanted to tap into the designers’ street-meets-ath-leisure aesthetic and build out the offering. Chow and Osborne also put their stamp on a new Air Jordan silhouette called the Jordan Horizon.

“The concept of doing something old and new is a great thing,” said Osborne. “We wanted to really update the 12s in a way that would make the sneaker feel a lot more modern for us now.”

The sneakers and seven-piece apparel collection, which retails from $100 to $400, will be at select Jordan stores and on jordan.com starting Saturday, but party attendees were able to shop early.

If the long line of shoppers waiting to purchase the pieces is an indicator, the collection could already be hit. But the busy designers, who were headed to the official after party at The Gilded Lily, were mum when asked about any future plans with the Jordan Brand.

“The answer to that question is dot, dot, dot,” said Osborne.