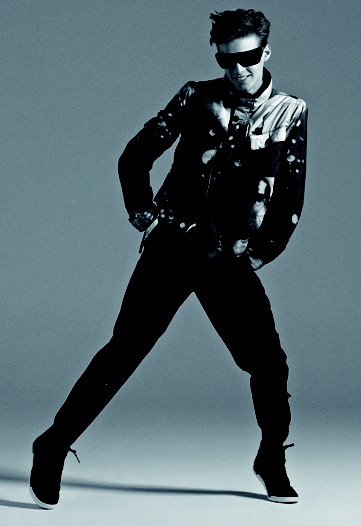 PARIS — Puma AG has given WWD a preview of the first looks from its new creative director Hussein Chalayan, the British-based designer known for his innovative use of materials and technology.

Called Urban Mobility, the collection for spring-summer is billed as “fashion sportswear” and accessories for the “modern urban traveler.”

“Urban Mobility is a considered balance between Puma’s technical excellence and my narrative approach to design,” Chalayan stated.

At the heart of the collaboration is Chalayan’s exploration of new technology, which has produced spellbinding runway moments: skirts that opened and folded by remote control, furniture that morphed into clothing and outfits orbited by electric lights.

While not as extreme, the pieces designed for Puma continue Chalayan’s penchant for cutting-edge style combined with function.

A jacket designed with internal compartments in different sizes, which organize travel documents, eliminates the need for a bag. Pants with a removable pouch-shaped pocket ease the stress of emptying pockets in a hurry during security control at the airport.

A long outerwear piece in parachute silk can be worn either as a glamorous dress or a jacket, while utility pants feature a zipper on the lower leg, allowing a switch from skinny to fuller legs in a matter of seconds. Footwear with elevated wedge heels adds a feminine edge to the comfort and flexibility of sneakers.

Luxurious shapes and fabrics are predominant throughout the collection, with a palette of black on black spiked with bright colors, plus a contrast of matte and glossy textures.

Retail prices will start at 35 euros, or $50 at current exchange rates, for a T-shirt, rising to 120 euros, or $169, for knitwear and reaching 250 euros, or $353, for the most expensive outerwear item. The Urban Mobility collection will be manufactured in Europe and in the Far East.

The collection is slated to reach stores in February with a related advertising campaign.

Chalayan joined Puma in February 2008, when the German company also acquired a majority stake in his signature fashion brand.

Puma, which is majority-owned by French luxury-to-retail group PPR, has a successful track record of previous collaborations with designers, including Jil Sander for footwear in 1998, yogawear with former model Christy Turlington’s Nuala range in 2000 and a collaboration with the interior and product designer Philippe Starck in 2004. Alexander McQueen, another designer in the PPR stable, also worked with Puma in 2005.

Nonetheless, the arrival of Chalayan marked a new direction at Puma, since he is the first fashion designer to be appointed as creative director of a major sports label in what is envisaged as a long-term collaboration rather than a one-off effort.

Click to see full-sized images of the Urban Mobility line>>