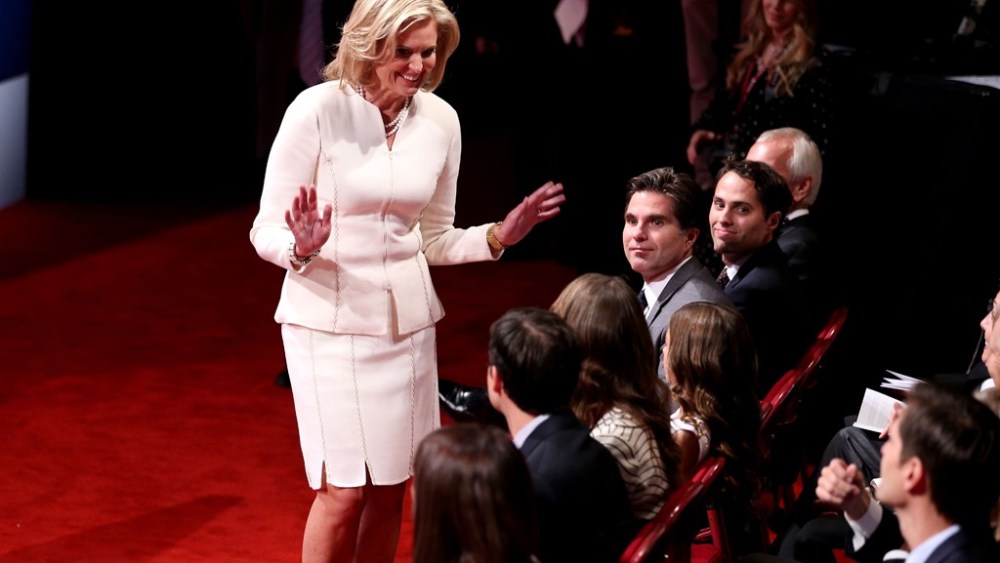 Take it from Jason Wu. A presidential push can make all the difference.

This fact seems to be a little lost on Alfred Fiandaca, the designer behind virtually all of Ann Romney’s wares since she took to the public stage. It’s been months since Mitt Romney cinched the Republican nomination and she joined her husband on the campaign trail, yet to the innumerable number of fashion-centric blogs that chronicle her every public appearance, the woman’s clothing choices have been quite a mystery; fashion credits, impossible. After all, it wasn’t until recently that Fiandaca took credit for his designs.

In an age when inboxes are inundated from p.r. reps every time Michelle Obama steps out, crediting their clients down to even the most minor components of her ensembles (socks anyone?), this is quite an anomaly.

Fiandaca has been flying under the radar for quite some time, over half a century actually. The designer founded his line in 1960 after studying at Fashion Institute of Technology and the former Traphagen School of Design. Fashion is in Fiandaca’s lineage as he’s the third generation in his family to pursue design. After school, Fiandaca set up shop on Maverick Street in East Boston, later relocating to Boston’s more chi-chi digs on Newbury Street and then opening a store in Palm Beach, Fla. His ready-to-wear prices range from $495 for tops to $1,200 for gowns. The designer has also quietly been sold at Bergdorf Goodman, Henri Bendel and Saks Fifth Avenue.

“I’m just not very good with the limelight,” Fiandaca admitted over the phone in his first interview since the campaign began. Ironically, it is that reticence that makes Fiandaca a perfect match for Ann Romney.

While one would assume at this political zenith that every fashion choice would be a highly orchestrated affair, the particular shade of blue of each candidates’ tie mulled over at length, that does not seem to be the case for Ann Romney. A far cry from Sarah Palin’s infamous $150,000 spending sprees of yore, Romney prefers to procure Fiandaca’s pieces off the rack, often choosing his ensembles that are several years old from her own wardrobe and that, gasp, she has worn before. She has never asked Fiandaca for a custom design.

Though the designer couldn’t elaborate on his sources, Fiandaca said Romney may repeat an outfit yet again for her turn cohosting “Good Morning America” this morning. “I think she’s going to wear the zipper-front dress,” Fiandaca said of his cherry red faille frock. “She’s worn it before and she looks ravishing in it.”

WWD: Tell us a little bit about your relationship with Mrs. Romney.
Alfred Fiandaca: She had been a customer for a long time, even before I knew her. She’s been purchasing so many of my clothes off the rack for years from my Boston store. It wasn’t until the campaign began that I found out she had been shopping there for many, many years.

WWD: But you knew her well before the campaign.
A.F.: Yes, we knew one another but I never realized how many clothes of mine she owned. We quickly hit it off when we met. She’s very endearing. What you see is what you get with her. It’s totally authentic. There’s no pretense.

WWD: When did you two meet for the first time?
A.F.: Oh gosh, years ago, at something for the Museum of Fine Arts in Boston.

WWD: You know the Romneys pretty well. I heard that you even helped them move a couple years ago, when they moved into their Belmont, Mass., home.
A.F.: Sort of, I was already at their new home while they were moving in just to say “hi.” Mitt was in jeans and a T-shirt and the furniture movers had left some of their furniture on the front lawn. Mitt just said “Could you come down here and give me a hand with this?” The two of us moved the kitchen furniture into the house. If the furniture movers only knew who they were delivering to!

WWD: Mrs. Romney has essentially been wearing only your designs since the campaign began. Of all the looks she’s worn of yours, which has stood out to you the most?
A.F.: The laser-cut leather look she wore on Jay Leno has stood out the most so far. It’s the least conservative one. She likes to wear edgier things than people realize.

WWD: Did you know ahead of time she would wear that?
A.F.: No, I find out just like the rest of America. I just normally watch “The Tonight Show” and there she was, in my design.

WWD: With the debate, did you know ahead of time she would be wearing your design?
A.F.: No, I mean on the day of I knew it was a consideration. But you never want to get your hopes up. The night of the Republican National Convention, when Ann was going to speak, I knew that Mitt had picked a red dress of mine for her to wear. In fact, he bought it for her. He told her, “I’d like you to introduce me in that” so I assumed that’s what she was going to wear. And she ended up wearing Oscar de la Renta, so you never know.

WWD: How did you feel when you saw her at the debate, in your cream ensemble?
A.F.: I was pleased, first of all, because it was not a brand-new outfit. It’s from my 2006 fall collection. She’s secure enough to wear something she likes, no matter how old it is. That’s always been my fashion philosophy: if a man can wear a suit for seven to 10 years, why can’t a woman? I also loved it because I had no idea it was part of her wardrobe.

WWD: Did you think she wore it well?
A.F.: She did. She’s a beautiful woman. It’s amazing because that woman I see on TV really is the woman I know. She’s completely authentic. A lot of times you meet [famous] people and they’re entirely different than you thought they would be. Like Mitt, he’s hysterically funny in real life. He has a phenomenal sense of humor and I see him on television and he’s like a stick. I guess he’s more amusing when he’s relaxed.

WWD: I know you said she primarily shops off the rack. Are you tempted to create any custom pieces for Ann?
A.F.: I haven’t made anything custom for her and, honestly, I think she prefers that. If she did ask me, I would willingly and gladly, though! I mean she could get any American designer to. She’s very big about her stuff being made in America.

WWD: What else does she look for in a garment, besides the origin of manufacture?
A.F.: She’s always thinking about what Mitt would like her to look like. She definitely dresses for him. Mitt likes her to wear red and pink, to have a defined waist and to show her figure because he’s very proud of her. They’re like kids together, like they got married two months ago.

WWD: Every fashion choice Ann makes is evaluated and critiqued by a multitude of fashion publications and blogs. Is that strange for you?
A.F.: No, no. I mean people have their opinion and they’re welcome to it. That’s what fashion is about!