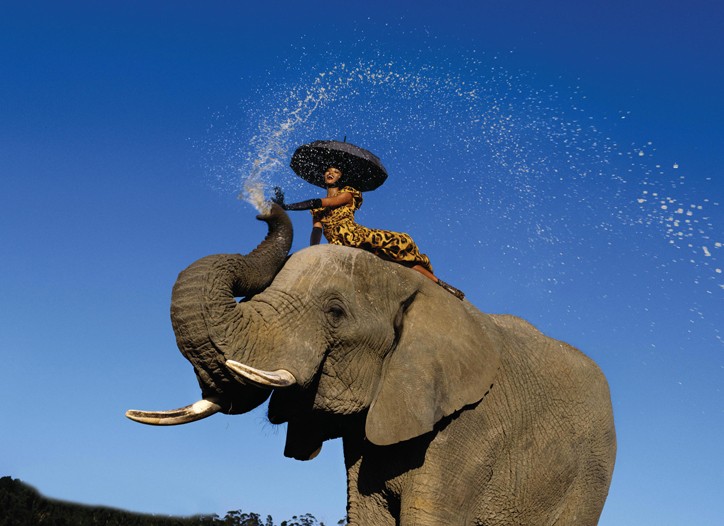 For a man who rarely speaks with the media, photographer Jean-Paul Goude is surprisingly candid when such an occasion arises. Or maybe that’s precisely why he doesn’t often talk to reporters. For more than 30 years, Goude’s private life and work have been inextricably linked, and as a result, his work has become a running biography of the childish reveries of early years, his complicated relationships and his exotic fantasies.

On Monday, Harper’s Bazaar editor in chief Glenda Bailey presented Goude, who works exclusively with Bazaar and V in the U.S., with an Achievement in Fashion award at the seventh annual Lucie Awards at Lincoln Center in New York. Later in the week, Goude, full of energy and at times nostalgic, sat down with WWD high above the city in his suite on the 50th floor of the Mandarin Oriental to talk about his early career as an illustrator-cum-photographer, his roller-coaster years with Grace Jones and the only celebrity he wants to shoot next.

WWD: You are obviously well known for your relationship with Grace Jones, whom you have described as “beautiful and grotesque at the same time.” It’s also been reported that you both sort of used each other to advance your respective careers. How did it all begin?
Jean-Paul Goude: In 1977 or ’78, I met Grace and it was a period of decadence. People were still doing lots of drugs and I had been working so hard for so long and she made me part of her lifestyle, made me go out dancing at Studio 54. She became an obsession and we did everything together. We both had our moments of weakness and when she announced she was pregnant, I had no intention of staying with her; I wasn’t happy with it. But she had the baby and then I became very soft and tender. I did [the book] “Jungle Fever” to keep sane. And things became so bad, I had to leave [Grace]. But I did my best work with her and we’re still very friendly. She is great.

WWD: If one of your assistants were in the room right now, how would they describe the atmosphere on a typical day at one of your photo shoots?
J.P.G.: I’m not a diva — so many are. I’m not a real photographer and if I could work without models, I would prefer it. But I’m a very nice person to work with, very gentle I think, because I’m an illustrator. I do hundreds of sketches, so I know what I want.

WWD: Starting around the age of 25, you began working as the art director at Esquire. How did this job come about?
J.P.G.: Harold Hayes [former editor of Esquire] was doing the [75th] anniversary issue for Esquire and called me. After several months had passed, he called and asked if I knew anyone that would be good for the job of art director; I proposed myself. A few days later, he offered me the job. I took everything I owned and moved to New York. I stayed for seven years and it was great, but I was not prepared for the literary world. I wish I had known more about it. I would see Gore Vidal in the hallways of Esquire; it was exciting.

WWD: Who do you want to photograph next? Is there anyone you haven’t had a chance to shoot?
J.P.G.: I don’t really think in terms like that, but I would love to shoot Janet Jackson. She is gentle, sweet, well behaved, not pretentious and very charming. We’ve really hit it off. I had heard she was trying to see me, to get in touch with me recently and I thought she may ask me to do something, but she just wanted to have tea. It was fun.