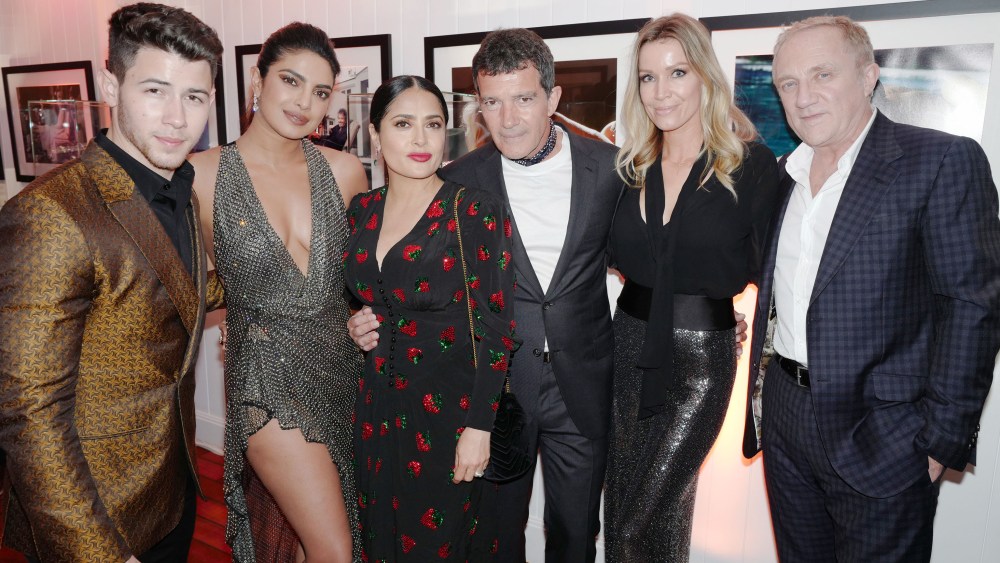 CANNES, France — Rambo is in fighting form. That was the message from Avi Lerner, executive producer of the “Rambo” franchise, who joined industry movers and shakers at a dinner and party held by Vanity Fair at the Hôtel du Cap-Eden-Roc on Saturday night, hosted by Vanity Fair editor in chief Radhika Jones and sponsored by Chopard. Sylvester Stallone is due to arrive in Cannes in the coming days for the premiere of “Rambo V: Last Blood” on May 24.

“He’s getting old, we have to accept it, but he’s doing good. He’s still Rambo,” said Lerner, standing on the edge of the venue’s rain-lashed terrace, raindrops bouncing off his suit. Lerner said the plan is to do another “Rambo” film.

“He’s in very good shape, Sly is the king. He’s training, he’s exercising, he eats well, he looks good. What more do you want?” he said, heading off to see Antonio Banderas, who was feeling a little weary after the emotional premiere for Pedro Almodóvar’s “Pain and Glory” the night before. Banderas’ character in the film is loosely based on the Spanish director, with the film a popular contender for the Palme d’Or.

“It was so emotional — it was almost embarrassing, actually, we didn’t know what to do,” shrugged Banderas, pounding his heart with his fist.

Adding an extra note of glamour to the event — the golden-ticket party of the Cannes Film Festival with guests including Charlotte Gainsbourg, Shailene Woodley, Adrien Brody, Liev Schreiber and Charlotte Casiraghi — was porcelain-skinned Dita Von Teese, who had poured herself into a glittery Jenny Packham bustier gown for the night. The burlesque star said she’s been vacationing in Europe, describing the break as “the calm before the storm” before her new show, “Glamonatrix,” will kick off in Australia this year before touring in Europe in 2020.

“The whole concept is strength in women, it’s very womanly, a departure from the typical pin-up things I do,” she said. “It’s a reinvention of the Champagne and martini glass acts, with lots of new things.”

Having a cigarette on the edge of the terrace, with views over the illuminated pool, meanwhile, Chloë Sevigny, dressed in Miu Miu, said the highlight of Cannes so far since her film’s premiere at the opening ceremony was escaping to the Colombe d’Or hotel in Saint-Paul de Vence for one night.

“André [Saraiva] managed to get me a room. There’s the art museum right there. I’ve been to Cannes 10 times but I’ve never been there, not even for dinner for one night,” she said. “It was nice to take a breather as I’m here for 12 nights!”

Greeting guests inside, Chris Tucker said his festival highlight was the after-party for “Rocketman,” where Elton John performed. “To hear his voice live, it was great,” he said.

Sporting a deep South of France tan, Pamela Anderson was accompanied by her son, Brandon Thomas Lee, who stars in the soon-to-be-released “The Hills: New Beginnings.” Dressed in a Ermenegildo Zegna suit, the actor chatted about the values his mother instilled in him as a kid.

“Growing up, no matter what it was, it could have been something small, she always wanted me and my brother to stick up for what we believe in. She has always been strong in her approach to activism. When she really focuses in on something like Julian Assange, the whales or anything that has to do with PETA, she’s all about it,” he said.

“She really doesn’t work that much anymore, she’s all about helping the wounded, anything that’s wounded, whether it’s people or animals. I commend her for that. It doesn’t pay her any money — most people want to do things for money, but she doesn’t care. She’s a great mum.”

With the party ambience cranking up a notch, on came “Stuck in the Middle With You” as live-wire Quentin Tarantino — in town for the world premiere of his latest movie, “Once Upon a Time in Hollywood,” starring Leonardo DiCaprio, Brad Pitt and Margot Robbie — entered the room, making a beeline for Robert Pattinson, who was hanging in the corner drinking a beer.

Standing nearby, full of Woody Allen-style tics, “The Social Network” star Jesse Eisenberg looked a little awkward. With his play, “Happy Talk,” under way in New York, starring Susan Sarandon, he’s in town to present the Kafkaesque Lorcan Finnegan-directed “Vivarium” in which he stars opposite Imogen Poots.

“I’m happy they selected it, it’s unusual for me. It’s about this couple who are trying to find the perfect home and end up getting stuck in a kind of fever dream of suburban life,” he said, suddenly crisping up. “This feels like doing a commercial for myself,” stammered the actor, turning the attention on Félix Moati, his costar in the just-wrapped movie “Resistance,” about a group of Jewish Boy Scouts who worked with the French Resistance to save the lives of 10,000 orphans during World War II. “We play French brothers,” said Eisenberg, disappearing into the crowd.