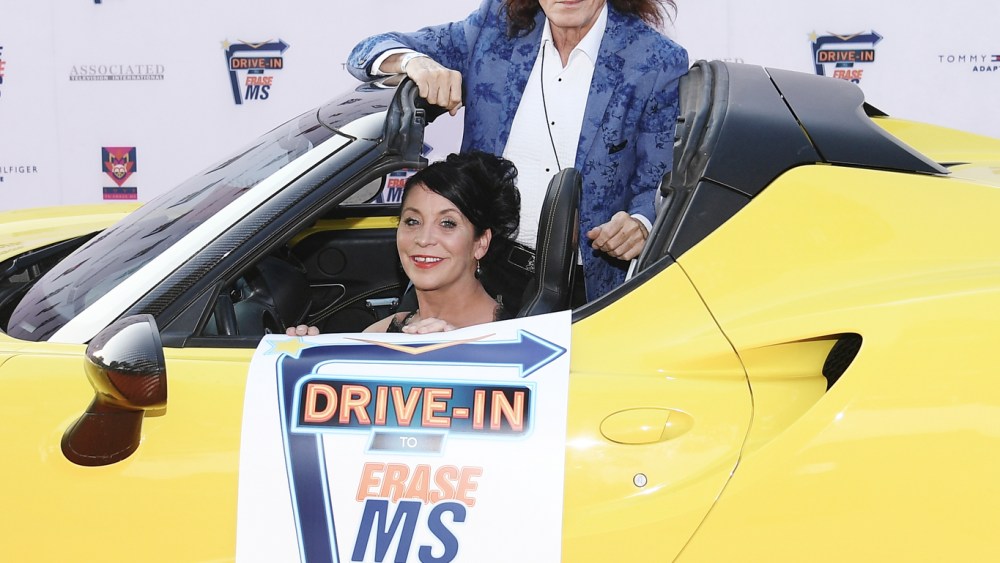 It was in 1993 that Nancy Davis founded Race to Erase MS — an organization dedicated to the treatment and cure of multiple sclerosis — after being diagnosed with the illness herself 29 years ago. To date, the charity has raised more than $50 million.

“When I was diagnosed, there was no known cause, no drugs in the market and basically no hope,” said Davis.

While seeking medical advice, she noticed that the country’s top physicians were conducting identical research.

“I thought, ‘Wow, if I could put the best and the brightest to work as a team, we could find a cure a lot quicker,’” she continued. “And we’ve actually done that.…There’s now 22 drugs on the market with FDA approval.”

These drugs are changing people’s lives, she explained: “There’s a 90 percent chance that if they start taking these medicines right off the bat, they can have a really good quality of life.”

All funds raised by the charity back the Center Without Walls, a collaborative program that unites MS research scientists representing Harvard, Yale, Cedars Sinai, University of Southern California, Oregon Health Science University, UC San Francisco, Johns Hopkins and UCLA. Davis hosts a gala with an auction every year to support the cause (the very first was in Aspen, Colo., featuring a ski race). And even amid COVID-19, she kept it going; while most events in Los Angeles last year were getting canceled, postponed or going virtual due to the health crisis, she pivoted to offer a drive-through concept at the Rose Bowl in Pasadena, Calif. For years, the fundraiser had been at the Beverly Hilton in Beverly Hills.

“We were never so shocked as last year, having to go back to square one and figure out what to do,” Davis said. “I mean, there was nothing. We always had [it] in a ballroom, where you had a facility that had a roof and electricity and bathrooms and waiters and tables, and all of a sudden we’re like, ‘OK, we don’t even have that. OK, your table is your car.’”

L.A. hot spot Craig’s was on hand last year to serve fried chicken sandwiches, spaghetti squash primavera and vegan ice cream in individual containers. Goodie bags — filled with snacks, as well as Peter Thomas Roth hand sanitizers and orange face masks (created by Davis’ jewelry brand Peace and Love) — were put in trunks upon entrance. Cars were then led to park in rows on a grassy field in front of a stage, where a live auction took place, before singer-songwriter Andy Grammer and others performed. The night raised $1.4 million.

This year, in a similar setup with safety measures in place, guests can expect an Alice + Olivia fashion show, and legendary band Earth, Wind & Fire as headliner.

“Everybody knows their songs, no matter what age group you’re in,” said Davis. “If you’re really young, if you’re really old, it just makes you happy.”

There are about 350 items up for auction, some accessible online now at charitybuzz.com, from a yacht trip to a psychic reading with celebrity clairvoyant Tyler Henry.

“We’ve also come up with really different auction items that work in this environment,” said Davis. They include a Zoom chat with Tommy Hilfiger (a longtime supporter of the organization) and a celebrity “follow” on Instagram from the likes of Nicole Richie, Nicky Hilton and Kyle Richards, among others.

“If we didn’t do events like we’re doing, we would go way back years of research,” said Davis. “It’s so critical that it doesn’t stop, even in a crazy year with COVID-19…The whole reason I do this is because we are changing lives. We’re saving lives.”