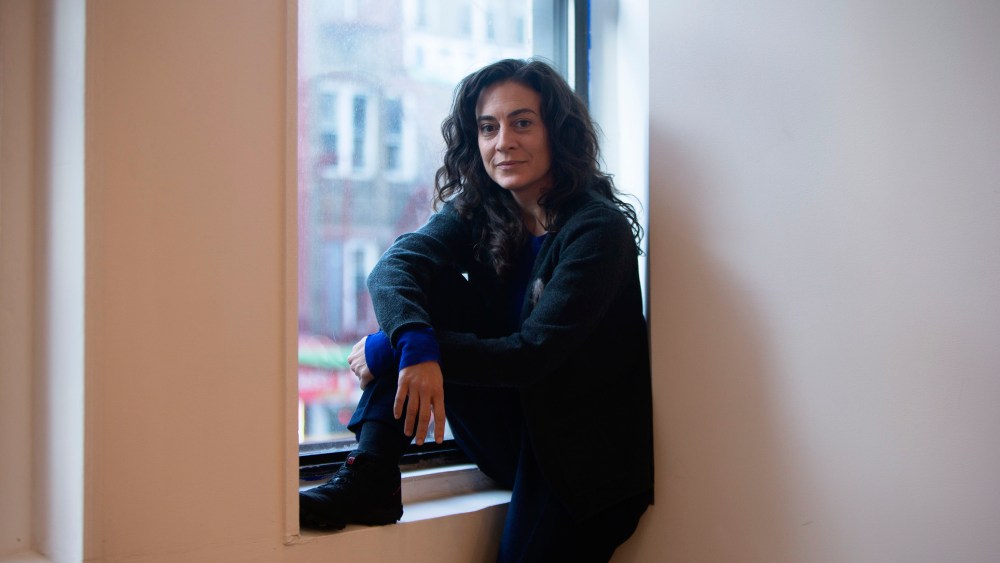 Ragen Moss wants you to take a really good look at her sculptures; like most art, there are many layers to consider.

But she particularly wants you to consider the literal inner layers. “One of the arguments that I would like to be presenting about sculpture’s capacity is that it can make specific arguments, it doesn’t have to always be about gestalt,” she says. The petite artist, who is based in Los Angeles, was in New York to install her newest work since several of her pieces were exhibited in the Whitney Biennial earlier this year. “Sculpture’s gift is to teach us about the space we are not, and to learn about what it means to be a human being through all of that.”

That argument is on display at Bridget Donahue Gallery in Manhattan’s Lower East Side, where her exhibition of new hanging works, “8 Animals,” is hard to sum up without the use of physical presence. Installed so that viewers can circumvent the sculptures and observe them at different angles, the works morph depending on where you are observing them, and what level of opacity is in view.

“It’s completely contour-driven, and yet it becomes completely not about the contour,” says Moss of her work. “By overloading the contour, there’s almost a collapse of it. It’s so overloaded it crumbles or disintegrates.”

The sculptures are all modeled loosely on the idea of a human torso, the core — and a core implies an interior. Her addition of an interior sculpture, often in the shape of a heart, also cues the viewer into the human quality of the work.

The sculptures resemble partially deflated helium balloons, and her labor-intensive process of creating them is proprietary. But Moss maintains that she’s not a process artist, and the work isn’t about her use of material; there are no symbolic meanings to untangle from her choice of acrylic, polyethylene, aluminum and steel. “It’s about space and it’s about creating these characters,” she says.

Her characters are unexpected — a girl sprinting, a leader reclining, a senior borrower and senior lender, puritan and hellcat — and often paired to highlight polarity. Moss collects words and phrases which make their way into her work, including legal text which she encounters in her career as a lawyer (like her sculptures, there’s a polarity to her own life.)

While the idea of space is explored within each sculpture and their physical relation with the viewer, Moss also sees a dialogue created between the sculptures, and installed the works with a focus on the interplay between their proximity in the room. To be sure, a different configuration would have highlighted different ideas proposed by each of the works; Moss sees her current layout as an outline of the present cultural landscape, inclusive of economics, religious and moral based judgment issues, and politics.

Space has influenced Moss’ artistic career, too, with the scale of her work increasing as her personal environment has expanded. “When I lived in New York, I lived in a 350-square-foot place and I made these tiny weird things,” she says. “And then I moved to Los Angeles and I had more physical freedom.”

Her work speaks to big ideas, which viewers may or may not take away from peering inside the sculptures.

“I’m more interested in really thinking a lot about an idea or a set of ideas and then putting them there, and then my job is kind of done and what people do with it, they do with it,” she says. “On some level, a viewer gets to see what they want to see.”