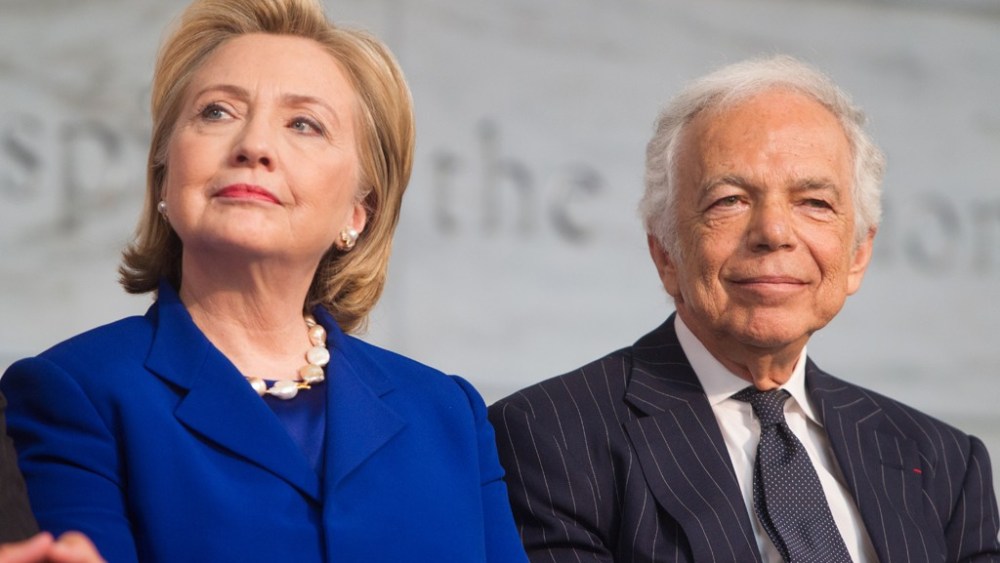 WASHINGTON — It was the Ralph and Hillary show here Tuesday.

Ralph Lauren came to the nation’s capital to be presented with the James Smithson Bicentennial Medal by Hillary Rodham Clinton. The designer was given the medal by the Smithsonian Institution for, as the museum noted, “his embodiment of the American experience through fashion, design and philanthropy; for supporting artistry, creativity, innovation and entrepreneurship for more than five decades, and for redefining for national and international audiences a style that embodies the American spirit.”

The event was held at the Smithsonian’s National Museum of American History, which displays

the American flag that stirred Francis Scott Key to write the poem that later became the national anthem, “The Star-Spangled Banner.” Lauren donated $13 million to the Smithsonian in 1998 to help preserve the flag — a donation made when Clinton was living in the White House during her husband’s second term as president.

The event Tuesday also featured a naturalization ceremony for 15 candidates from 15 countries. The number was historically significant since it honored each of the 15 stars and 15 stripes on the original banner, which marks its 200th anniversary this year. Lauren arrived in Washington on Monday and immediately made his way to some of the sights, which reminded him of the city’s historic impact.

“I woke up this morning, and was looking out of my window and saw the White House,” he said before the awards ceremony, citing a perfect frame replete with a Stars-and-Stripes flag. “We don’t get a chance to do this very often — to sit back and say, ‘Oh my God, now this is interesting.’ We take it for granted but it reawakens your sense of country.”

This being Washington, politics naturally were a topic of conversation during his visit: The designer suggested he would endorse Clinton should she decide to run for president in 2016.

“If ever there was a woman who should be president, I believe it’s Hillary,” he said. “She is capable and has the experience. And so, whatever she decides, I am happy for her, as a woman and a person who has done so much for our country.”

As for sartorial matters, Lauren stressed that those in the public eye should embrace a style that best expresses their personalities.

As Clinton took to the stage in her custom cobalt blue Ralph Lauren Collection silk suit with a matching blouse, she received thunderous applause from the audience.

“As we celebrate new citizens, we celebrate someone who is from an immigrant family,” she said of Lauren. “When his parents made the choice to leave Belarus and come to America, they were fleeing very real dangers. But they were also heading toward new opportunities that they thought would benefit their families and particularly give their children the chance at developing their own God-given potential.”

Lauren was joined by his family: wife Ricky, daughter Dylan with husband Paul Arrouet, and sons Andrew and David, who was joined by his wife Lauren Bush Lauren, as well as the designer’s siblings, Leonard, Thelma and Jerry.

“Surely Ralph and his family — and he has brothers and a sister here today — could not have imagined, or maybe they could have when they lived in the Bronx, that their lives would be the embodiment of the American dream,” Clinton said. “In particular, Ralph, the youngest, would become synonymous with American aspiration and style. And in so doing, he would come forth with a vision and an optimism and an energy that marks our country and those who call it home. He would exemplify the American dream and also make it possible for so many others to have their dreams.”

When it came to Lauren collecting his award, he was visibly moved and choked up. He recalled his first night in the capital.

“My family got together and went to dinner, where do you think we went after dinner?” he told the audience. “We went to see the Lincoln Memorial, and as I looked at it and got close to Lincoln — and I looked at the boots that were hanging over because I wanted to know if they had the Ralph Lauren label.”

Joking aside, he recounted his story from the Bronx to Seventh Avenue and beyond. Lauren also recalled his parents preparing to become U.S. citizens.

“Watching my mother study for the test was scary. I didn’t know what she was reading there that was so important,” he recalled. “But she did it, and my father, too. They inspired me to go to school and do all the right things that would help me in life.”

After the presentation, which started and concluded with a performance by all-girl group Della Mae, the Smithsonian hosted a lunch for Lauren in the presidential suite of the museum.

With such a busy schedule, Lauren wasn’t able to study D.C. style.

“I didn’t get a chance to look,” he said. “I was looking at Lincoln’s shoes.”