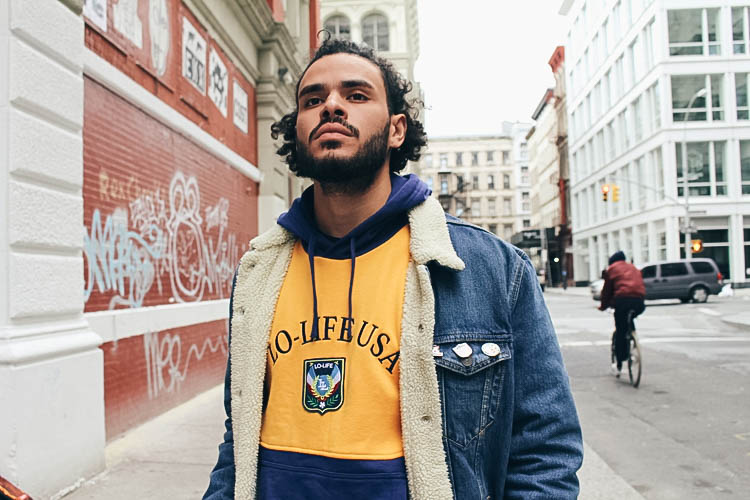 During the late Eighties and early Nineties, department stores in the New York Tristate area faced a theft problem they couldn’t avoid. If a store sold Ralph Lauren, it was susceptible to a visit from the Lo-Lifes, a gang from the Crown Heights and Brownsville neighborhoods in Brooklyn. The crew made it their daily mission to ransack shops for the most ostentatious or easy-to-grab Polo merchandise, which they then resold or wore like ceremonial garb.

“It was a full-time job,” said Bonz Malone, an original Lo-Life member and graffiti artist who went on to become a music and culture journalist. “We blew out Macy’s, Lord & Taylor, Saks Fifth Avenue. We were coming in 20 and 40 people deep. There was no way you could stop all of that.”

The Lo-Lifes helped make the Waspy brand desirable within urban communities. Their brotherhood and fixation with Polo spawned a subculture that was initially confined to Manhattan and Brooklyn but spread across the globe thanks to the group’s founder, Thirstin Howl 3rd, a rapper who calls himself a Polorican, and eventually the Internet, which made more people aware of the movement. Last year, Tom Gould, a photographer from New Zealand, released a book with Howl documenting the group’s impact titled “Bury Me With the Lo On.”

“We created the vintage market for Ralph Lauren,” Howl boasted. “And because of the culture we created, I’ve been able to sell an old Polo teddy bear sweater that’s not in the best condition for $6,700.”

Pieces from Howl’s personal collection automatically command a high resale value, but the demand right now for vintage Polo Ralph Lauren is at a high. According to eBay, sales of vintage Polo Sport apparel and accessories over the past 90 days have increased by 27 percent and vintage dealers with brick-and-mortar stores across the country are having a hard time keeping the pieces in stock.

“It’s definitely at a peak because now skaters are wearing Polo, which I haven’t seen before,” said Will Wagner, the owner of DeepCover, a vintage shop in New York’s Lower East Side that sells sportswear from brands including Polo Ralph Lauren, Nike, Nautica and Tommy Hilfiger. “They don’t even know about it, they just want it. I have kids who come in here wearing all Supreme and they are, like, ‘Oh, do you have any Polo?’ And I’m, like, ‘What are you looking for?’ And they say ‘Anything.’ And I’m, like, ‘Anything? Do you know how much room that leaves?’”

Wagner would know: He is also a Millennial and a Polo enthusiast himself with enough items to operate a mini archive out of his house in Long Island, N.Y. When WWD stopped by his shop he proudly displayed his extensive collection of Ralph Lauren, which consisted of T-shirts, denim jackets and hoodies, along with more obscure items such as Polo Sport frisbees, mugs and footballs. Wagner said due to the logomania trend, Millennials in search of relics from the Nineties have taken to Ralph Lauren, specifically Polo Sport, because of its bold type and primary colors. As WWD left the store, a young girl wearing a cobalt blue Polo Sport puffer jacket with a white tennis skirt breezily made her way in.

She probably wasn’t alive when Polo Sport launched in 1992, a seminal time period in terms of design for Ralph Lauren, who also introduced the Stadium line that year. Polo Sport was meant to be worn, per its stately advertisements with Tyson Beckford, while boating, hiking, riding a bike or playing basketball. The collection was discontinued in 2005 so the company could focus on the RLX activewear line.

“To me, Polo Sport has some of the most important pieces Ralph Lauren has ever done,” said Daymon Green, co-owner of Community 54, a vintage boutique with locations in New York and Toronto. “It inspired why people collect Ralph Lauren. It was comfortable and the colors matched your sneakers. It was perfect for the street.”

While many Polo Sport pieces are reselling at price points ranging from $50 to $150, more rarefied items that have been made popular by the Lo-Lifes or significant moments in hip-hop are commanding hefty price tags. Stadium jackets, which were originally priced around $300, are selling for $2,000 and $3,000. The Snow Beach jacket, which was memorialized by rapper Raekwon in Wu-Tang Clan’s “Can It Be All So Simple” video, is selling from $3,500 to $5,000. Raekwon told Complex he purchased it for $200 in 1994.

Initially, the NASA jacket wasn’t well received by collectors because it sat under the Polo Jeans Company division, which was a lower tier for the masses, but it received an uptick in resale value once customers realized Mel B, aka Scary Spice, wore the jacket in the “Spice World” movie. Justin Esposito, the creative brand director from secondhand store Round Two, said they sold one for $8,000 and its original price tag read $189.

“Social media helped change the perception of the NASA jacket,” said Brian Procell, who started selling Polo Sport out of his Lower East Side store, Procell, 10 years ago when it wasn’t technically vintage. “Seeing Scary Spice wear it made a serious impression with Millennials who were nostalgic for that era and that reference.”

The brand’s popularity within the resale market has trickled down to streetwear designers, who have consistently looked to Ralph Lauren for inspiration, but as of late, the influence is more palpable. The spring 2017 collections from brands including Dope Sport, Pink Dolphin, Reason and Vctry, a sportswear line under 10.Deep, feature very close interpretations of Ralph Lauren designs from the Nineties. Round Two’s storefront in Los Angeles and its line of T-shirts are based on the Polo Sport type and logo. In 2015, Howl, who has produced Lo-Life merchandise for the past 30 years, partnered with designer Willie Esco on a Lo-Life apparel collection. The first capsule was modeled after Lauren’s Stadium line.

“Initially it was hard to find investors who were like-minded or who understood that they wouldn’t be sued by Ralph,” said Esco, who noted that the collection is selling well. “But we wanted to stand for an interpretation of Americana inspired by Ralph. We wanted to take what the youth were doing during the Eighties and Nineties and try to make that relate to today’s Millennial.”

Many brands — Tommy Hilfiger, Nautica, Fila and Guess, for example — have attempted to do the same and attract a new customer via its archives, but Ralph Lauren has operated differently. The company has avoided collaborations or anointing new brand ambassadors. It’s also concentrated less on releasing small one-off collections, a method the brand followed in the past that’s currently the primary way designers are creating excitement at retail.

The brand, which turns 50 this year, is currently focused on its Way Forward plan, a blueprint put in place by Stefan Larsson, the former Old Navy and H&M executive who joined the fashion firm in 2015 as president and chief executive officer — a role that was previously only held by Lauren — but will leave the company in May after clashes over strategy with the founder. The Way Forward blueprint is a turnaround plan for the business, which, like many large fashion companies, has struggled over the past few years to find its footing. Larsson had tasked the company with speeding up the supply chain, focusing on the core collections of Ralph Lauren, Polo and Lauren; eliminating management layers, and shuttering stores.

During its third quarter, net income fell 37.4 percent to $82 million, or 98 cents a diluted share, from $131 million, or $1.54, a year ago. Net revenues were down 11.9 percent to $1.71 billion from $1.95 billion. The company also recently revealed it was closing the Polo Fifth Avenue flagship in New York, which opened in 2014, and will instead invest in its digital platform and explore new retail concepts. (The Polo Bar will remain open.)

The Fifth Avenue flagship is an ode to the Americana lifestyle the designer has meticulously crafted, although there are no signs of the Ralph Lauren aesthetic from the Nineties that’s currently trending on Instagram. A few pieces of Polo Sport hang on the store’s racks, but the line has reemerged as a true performance assortment with a slicker logo and mostly neutral color palette. There’s some vintage, but it’s a small collection of turquoise jewelry.

“There’s such a massive influence with social media that the younger generation sees Ralph through a different lens, and then they walk into the flagship and there’s a disconnect. That’s a problem they are going to have to figure out,” Procell said.

But analyst Andrew Jassin, cofounder and managing director of the Jassin Consulting Group, believes the brand’s ability to appeal to multiple generations is one of its best assets and the Millennials’ affinity for the older items shows that it still holds cachet. But Jassin said getting this customer to buy current merchandise or walk into a Ralph Lauren shop is going to require some newness.

“The one thing that I can say about Ralph’s business is that it’s been consistent, which has contributed to its success, but customers are looking for new heroes or brand ambassadors,” Jassin said. “One can only speculate that this isn’t something that he’s wanted to do or the company is just being careful and wants to make sure the new ambassadors don’t hurt the brand.”

Although his days of stealing Ralph Lauren are over, Howl remains an unofficial ambassador for the brand and he still profits from the culture he helped start — Howl says he regularly sells pieces off his back. But while teens and twentysomethings are introduced to the vintage pieces Howl used to risk his life for, he, funnily enough, is less enchanted with that product.

“I like a lot of the new stuff,” Howl said. “I never cared for the older stuff because I was there for it.”