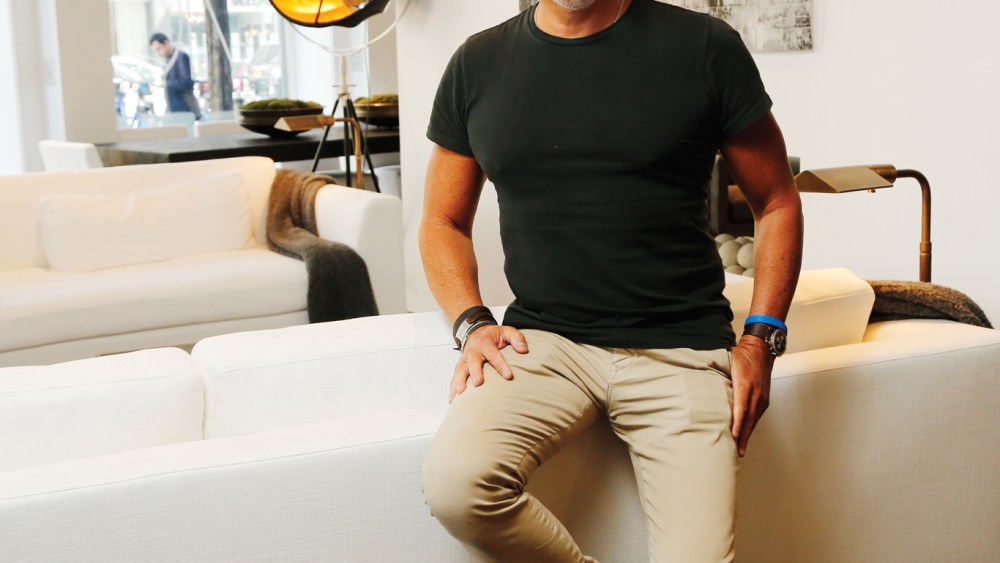 Gary Friedman wants to give consumers a full RH experience. There’s reproductions of 17th and 18th century English, French and Italian antiques for traditionalists, and for Millennials — who often draw design inspiration from
Apple — there’s modern furniture influenced by minimalism, the Bauhaus movement and Art Deco. There’s an RH restaurant — the first of many — and a guest house is in the works. Apparel, the last piece of the lifestyle puzzle, is close at hand.

Friedman, chairman and chief executive officer of RH, has a distinct aesthetic that he noted will carry over to fashion: Clean and minimalist with an emphasis on materials, quality and craft. RH’s small existing assortment offers a hint in terms of its emphasis on luxury fibers such as long strands of cashmere for infinity scarves and stonewashed Belgian linen for pajamas. Jewelry, a category RH plans to address, exists for kids with pavé diamond, charm and dog tag necklaces.

Friedman’s plans to sell apparel at RH could send a small tremor through the industry, although a formal launch date hasn’t been set. Friedman noted that he freed consumers from the interior design industry’s practice of taking markups and he’ll similarly expose what he feels are luxury fashion’s bloated profit margins.

“There’s a disruptive opportunity that exists in apparel, especially in the luxury market that we’ll exploit,” he said. “Every luxury apparel brand started as a wholesale brand, so by its very nature there’s this extra markup. Whether you’re Brunello Cucinelli, who I love, or Prada or Gucci, you’ve got this extra markup. Even when they have their own stores, they have to have the same prices as the department stores.”

Apparel is an inevitable part of Friedman’s strategy to create a complete RH lifestyle, inspired by Ralph Lauren, whom Friedman studied closely and admires for “presenting his image and brand in such a complete way.”

The vehicle for launching apparel will be RH Atelier, which will use the infrastructure of the former apparel brand Hierarchy that RH acquired in 2013. Friedman promptly renamed Hierarchy RH Atelier. The focus will be on luxury apparel, accessories, footwear and jewelry. Already, RH manufactures cashmere bathrobes and knitwear, heathered cotton cashmere pajamas, quilted ballet slippers and Italian leather bags that could reside in one of RH’s $4,400 reclaimed Russian oak armoires.

“We’re building these amazing [stores],” Friedman said. “You could go into a bedroom and the armoire would have clothes in it — and you can buy them. It would be done in a voyeuristic way, almost like you’re in someone’s beautiful home.

“I’m not under pressure to make that much money on apparel. The operating margin of many luxury brands is 25 to 30 percent, but I only have to make 15 percent,” Friedman added. RH’s long-term operating margin target is in the midteens.
RH is the biggest seller of Italian luxury linens in the U.S. “Ours is made in the same factories as brands like Pratesi,” Friedman said. “We can have the same quality of cashmere and leather and be half the price. I want to create a vehicle to allow people to have beautiful clothes at cost.”

Friedman joined Restoration Hardware as ceo in 2001 after being passed over for that job at Williams-Sonoma after 12 years. He transformed Restoration, then a $375 million retailer of furniture and household products such as vacuums and shoe polish, into RH, a luxury home furnishings force with a market value of $4 billion.

“I’m the least likely guy to be doing what I’m doing,” he said. “We grew up so poor, we had no furniture. I lived in 21 different places before I was 18.” After being kicked out of junior college — Friedman noted that he’s dyslexic — he landed a job as a stock boy at The Gap and worked his way up the ranks to become the company’s youngest store manager at 21. When Millard “Mickey” Drexler in 1983 joined the Gap, he became a mentor. “Mickey was talking about things I believed in, like selling clothes that people actually want to wear,” Friedman said. “I’d never be doing what I’m doing if I didn’t have the opportunity of being at the Gap when Mickey was there. I had some style and he took an interest in me and involved me in meetings I never would have been” invited to.

“What Gary has done with RH is extraordinary,” Drexler said. “He has reinvented, remerchandised and re-branded an already great business to make it even greater.”

During a recent interview at the redesigned RH gallery in the Flatiron District, Friedman pulled out a dog-eared copy of a Restoration Hardware catalogue that he keeps in his briefcase to “show my team what is possible.” Sitting on an Italia taper arm sofa from RH Modern, Friedman called the collection the company’s biggest launch. Entire floors are dedicated to RH Modern at recently opened next-generation design galleries in Chicago, Denver and Tampa, Fla. In November, a freestanding RH Modern gallery opened on Beverly Boulevard in Los Angeles with the statue of an angel on the roof and an outdoor sculpture garden. A source book heavier than Vogue’s September issue and photographed by Fabien Baron heralded Modern’s arrival.

Wearing a T-shirt, brown pants, work boots and leather wristbands with inspirational messages such as, “Live and let live,” Friedman is relaxed about his wardrobe, but, not surprisingly, serious about design. As far as he’s concerned, it’s Design with a capital D. “We’re obsessed with architecture. We either find it and adapt it or we build it,” said Friedman, who can sound lofty when referencing Marcus Vitruvius Pollio, the Roman architect who lived in the first century, or the golden mean, an ancient ratio for assuring a building’s harmony.

Friedman’s investment in huge RH galleries has unsettled some investors. “The public markets want to define a business and put a box around it,” he said. “They want you to say, ‘We’re opening 5,000 of these.’ It’s not inspiring to do the same thing over and over again. Investors and analysts are seduced by a capital-light business strategy. Companies tout their online growth rate, believing it to be the more profitable channel. It’s obvious that a big percentage of a small number is still a small number. Why would anyone conclude that online is more profitable?”

Friedman said inspiring three-dimensional environments will always trump one-dimensional online stores and almost mocks the current preoccupation with digital. “We have multiple new concepts in our product development pipeline. With less than 10 percent of our assortment displayed at retail, we have to open next-generation design galleries. It’s not about the Internet. Only 10 percent of sales are online. It’s about lack of imagination.”

“We made no demarcation between the store and the restaurant,” Friedman said. “If they’re not eating, they’re drinking — customers walk around the store with a glass of wine.”

RH will take hospitality even further with a 12-room guesthouse with an apartment for Friedman on the top floor in the Meatpacking District near the future site of a six-floor, 80,000-square-foot RH Gallery on Ninth Avenue.
While RH galleries can be found in malls, Friedman prefers open air centers, calling traditional malls “airless environments where nothing can thrive. There’s no real creativity in retailing today. [Stores] are designed for products and not people.”

One of Friedman’s favorite projects is a one-off, RH Yountville in Napa Valley, where the company bought Maisonry, a wine, art and antiques business housed in an old stone building and the adjacent property. A path dotted with olive trees will connect Maisonry with three new buildings. In the backyard garden, Friedman envisions a table for large dinners. “This one for sure will be huge,” he said of the concept.

Friedman gets annoyed when people tell him he works too much. “I love what I do. It’s as much a hobby as it is a job. People say, ‘You should have a work-life balance.’ I work 18 hours a day. Don’t worry about me. My work is my life. This kid who never lived in a house, never had any furniture….I never dreamed that I’d ever be leading one of the biggest home furnishings companies in the world. It never should have happened.”