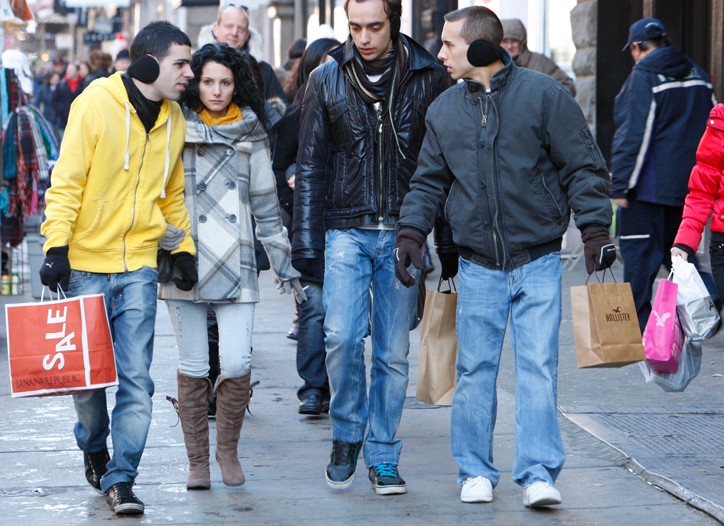 The gifts haven’t been opened yet, but retailers who kept a lid on inventories to try to squeeze out profits are looking to holiday’s second season — the week between Christmas and New Year’s.

True to form, Wal-Mart Stores Inc. plans even deeper discounts and department store and fashion chains across the U.S. will elevate markdowns to more than 50 percent to make room for resort and spring goods.

The world’s largest retailer said Wednesday that from Dec. 26 through New Year’s Day it will offer new deals such as a $50 gift card with an Xbox 360 purchase, an eMachine netbook for $228 and as much as 50 percent off clearance on hundreds of home holiday items such as candles, ribbons, bows and toys. Wal-Mart alsowill extend other holiday deals such as Blu-ray movies for less than $20.

Wal-Mart sees gift cards figuring in big in the post-holiday week, particularly among mothers getting them as gifts. Two out of five Wal-Mart-shopping mothers plan to use their gift cards immediately after Christmas, believing they will find the best prices at that time, the retailer said.

Season-long strategies to cut costs, keep inventories low and markdowns contained appear to be paying off — even as research indicated more consumers than ever were delaying purchases in the hope of discounts — with several retailers saying fourth-quarter margins are healthy and ahead of last year’s, which don’t take much to beat.

Merchandise stocks were cut about 25 percent at soft goods stores and 10 percent in electronics stores, along with reductions in personnel and administrative expenses. The downsizings came amid reduced demand, double-digit unemployment, the soft housing market and overall economic turmoil.

Some merchants acknowledged going too far with the inventory reductions in certain categories and missing potential sales in areas such as shoes, handbags and contemporary sportswear, though overall, they don’t regret the paradigm shift.

“Looking back on all that’s happened, we can say this really helped us all become better retailers and more realistic about what we do,” said Ron Frasch, vice chairman and chief merchandising officer of Saks Fifth Avenue.

On the cusp of post-holiday selling, there was no shopping crescendo, but there didn’t appear to be cratering, either.

“There appears to be more gift giving, and in general, a sense of less anxiety than last year,” said Gerald Barnes, president and chief executive officer of the Dallas-based Neiman Marcus Direct.

“I don’t see a big swing one way or the other; it’s OK,” said an East Coast retail ceo, who spoke on condition of anonymity. “The Internet is strong. The numbers aren’t bad. The store isn’t mobbed. We are definitely less promotional than last year. I think we will be OK.”

Retailers on average are expected to report holiday sales in the range of negative- to plus-two points. But next year, mainly in the second half, they’re likely to go after substantial top-line gain. Caryn Hirshleifer, who oversees marketing for the Hirshleifer’s designer store in Manhasset, N.Y., said, “We exerted some control over our purchases. We became real disciplined. We’re heading toward increasing our buys again.”

Asked whether Hirshleifer’s lost sales because of the controls, Hirshleifer said, “Losing sales was a little bit of a concern moving forward, but we were able to manage it logistically. We realized that you can do as well or better with less. However, you do worry that you won’t have the fuel you need to stoke the fire.”

Overall, she’s pleased with the fall outcome. “We saw a real uptick in early September. September, October and November were great and December has been really good.”

Ilaria Urbinati, co-owner of Confederacy boutique in Hollywood, said because the store kept inventory down, holiday discounts haven’t been drastic or early.

“We have very little inventory left this season, which is a good thing, although sometimes we are short on sizes,” Urbinati said. “We had the luxury of not having to do massive markdowns, just enough to give people that extra incentive. It’s been good because the sales the last few weeks have been really strong, whereas November was slower.”

Fred Levine, owner of the nine-unit M. Fredric contemporary chain in Southern California, said he pulled back on promotions for his stores.

“Our customers and our staff are just burned out on promotions,” Levine said. “People want to look nice, get fair prices and great customer service. We’re hoping that will do it for us.” The chain’s big holiday sale starts the day after Christmas, with steeper markdowns to follow after New Year’s Day.

“We’re trying to condition customers out of the extreme discounts of the past year,” Levine said. “We’re not going to give stuff away, we’re not doing 30 or 40 percent off the whole store. We’ve reduced our inventory levels significantly — in proportion to what we’re feeling in sales volume.”

Levine said vendors have helped “to let us swap out the poor seller for things that will sell well. Because of that, our inventory has been really lean and we don’t have the need for massive markdowns.”

Rochelle Gores, owner of Arcade boutique on West Hollywood’s Melrose Avenue, said fall merchandise goes to 50 percent off on Saturday, then to a steeper discount after the new year if discounted items haven’t been sold.

“Overall, I keep everything very tight — that’s how I do business,” said Gores, whose father, Alec, is a hedge fund manager on Forbes’ list of richest Americans. “If I had the store five years ago when the economy was booming, maybe things would be different. But even in good times, when you are letting the overhead fly and not buying conscientiously, even selling more you’re still not doing as much margin-wise — that’s not good business.”

“We have had a very good season,” said Net-a-porter vice president of sales and marketing Alison Loehnis. Sales in the U.S. are up just under 50 percent since Thanksgiving, led by shoes, jewelry and resortwear.

Web sites have experienced moderate single- to low-double-digit growth this season, according to analysts. For many online retailers, the biggest shopping days were Tuesday through Thursday last week. Online shopping tends to spike in mid-December and then taper off because of shipping deadlines.

Sales this past weekend increased 20 to 24 percent compared with last year because of a rise in promotions, guaranteed Christmas deliveries and the snowstorm that hit the Northeast and mid-Atlantic states, according to Coremetrics. But comScore said weekend revenues were up 14 percent and 4 percent for the season.

Forrester Research Inc. predicted holiday Internet sales will grow by more than 8 percent based on interviews with retail executives. “The online world is doing pretty well overall,” said analyst Sucharita Mulpuru. “There was some dollar shift to the Web channel, no question about that.”

Souers said markdowns would not be as steep since electronics stores can hold inventory longer. He suggested electronics sales could be affected by a lack of “revolutionary” products and stores in the sector have very little risk of too many stockouts and should also have improved margins.

In partnership with J.D. Power and Associates, S&P mined the “blogosphere” for 10-and-a-half months until Nov. 15 and concluded that, compared with other consumer sectors, electronics remained relatively healthy, driven by hot products such as MP3 players, wireless handsets, video game consoles and digital imaging products, though flat-panel TVs may be nearing saturation.

Barry Judge, chief marketing officer at Best Buy, cited a Consumer Electronics Association survey that found 80 percent of shoppers planned to buy consumer electronics this holiday season. The retailer’s own survey found 73 percent of consumers hadn’t completed their holiday shopping as of Monday. Best Buy even launched a video at IHaventStartedShoppingYet.com to motivate consumers to shop.